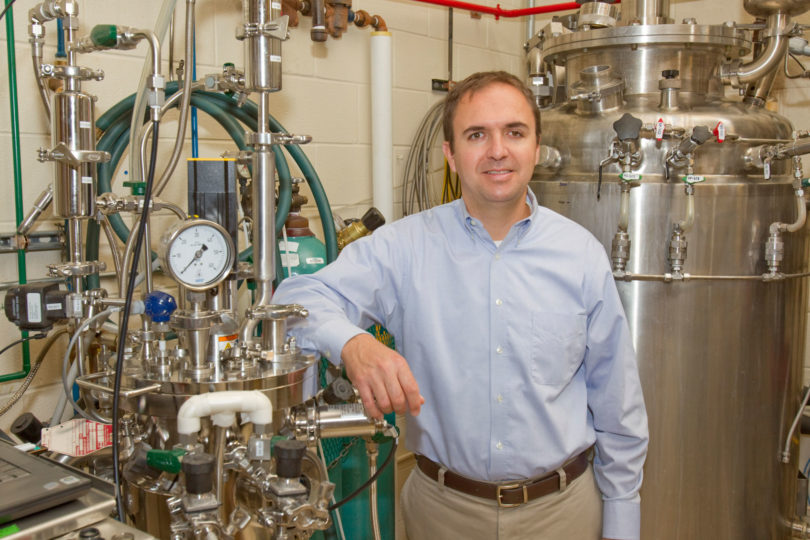 With a new director, a little-known UGA facility pushes ahead

A small brick building tucked in behind the sprawling Davison Life Sciences Complex houses one of the busiest labs on campus. But aside from the scientists who use its services, the Bioexpression and Fermentation Facility isn’t well known at all.

The new director of the facility, David Blum, himself a research scientist, came to Athens in August from Vanderbilt, and he has ambitious plans to make the facility better known and eventually to expand it.

In truth, the BFF, as employees there have called it for years, has parts of its operation in buildings such as Chemistry and Life Sciences, as well as other locations. But its heart is in the 5,000-square-foot structure that a visitor could walk past almost without noticing.

“I’m really excited to be the new director of this facility, because in so many ways, it’s a perfect fit,” said Blum.

It’s also a homecoming for Blum, a native of Jonesboro who earned dual undergraduate degrees in microbiology and biochemistry from UGA, as well as his doctoral degree in biochemistry and molecular biology.

“I have a somewhat eclectic background in the area of biofuels and enzyme discovery, as well as vaccine research when I was at Vanderbilt,” he said. “So the broad spectrum of what this facility does fits many of my interests.”

The facility itself has been around, surprisingly, since 1967, but with steady upgrades and the addition of cutting-edge equipment, its work now involves everything from the cloning and expression of genes to the fermentation of bacteria capable of growing at the temperature of boiling water and which are thought to be some of the earliest living organisms.

With  23 computer-controlled bioreactors, the facility is constantly cranking out results for researchers on campus and for clients in industry in the U.S. and internationally.

The industry and research projects that the facility serves are varied and complex, including biofuels, industrial biotech, pre-clinical pharmaceuticals and basic research. With 15 employees on staff, including six Ph.D. scientists, the facility currently has 20 different projects running full-tilt.

“Our newest addition is a 1,500-square-foot suite in the Animal Health Research Center,” said Blum. “This area is dedicated to cell culture products and has bioreactors and equipment for analysis as well as protein purification equipment.”

Blum succeeded Tim Davies, who was BFF director from 2001-2011. Davies accepted a position in his native United Kingdom earlier this year. Blum began his career with a post-doc at the University of California-San Diego and then moved on to the Diversa Corp., where he served as a staff scientist and was principal investigator for a project that focused on enzymes involved in the degradation of cellulose.

He moved to Vanderbilt in 2005 and performed basic research in the areas of cancer biomarker discovery and human antibodies, among many projects. Along the way, he was awarded three patents.

The BFF will soon offer monoclonal antibody services as well as expression of proteins in mammalian cells. These services will benefit UGA’s growing interests in biomedical research.

“Expression of proteins in systems that mimic their native state is necessary for research success,” Blum said. “My vision is for the BFF to be a resource for research reagents ranging from production of biomass to the development of clinically relevant antibodies. The tools that BFF offers will benefit a broad range of research activities from vaccine development to understanding the origins of life.”