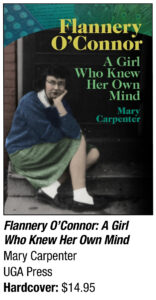 “Flannery O’Connor: A Girl Who Knew Her Own Mind” is a comprehensive biography of American writer Flannery O’Connor. Born just before the Great Depression, O’Connor faced countless struggles to overcome financial and family hardships. O’Connor was originally from Savannah and spent much of her young life just north in Milledgeville.

O’Connor’s work encompassed life in the American South, often discussing the social issues and politics of the time, including her own Catholic religion. She completed multiple books, short stories and essays before her untimely death at 39 following a battle with lupus.

Mary Carpenter writes O’Connor’s biography in a frank but age-appropriate manner, aiming to introduce the strong female writer to a nine-to-ten-year-old audience. Writing for an older middle-school age group, Carpenter approaches the topics of O’Connor’s work in a way that doesn’t hide her shortcomings but emphasizes her work as one of the most respected fiction writers of the 20th century with context. O’Connor was a role model for unconventional girls who dreamed of writing, and Carpenter hopes to bring O’Connor into the current writing landscape.