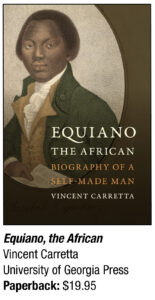 Born sometime around 1745, Olaudah Equiano was known as the most renowned person of African descent in his time. He published his own autobiography in 1789, which became his greatest legacy.

“Equiano, the African” is a comprehensive biography of the man who was part of the early movement to ban the slave trade. Equiano contributed the earliest known purported firsthand experience description by an enslaved victim of the Middle Passage from Africa to the Americas.

Equiano was enslaved as a child in the Eboe region of the Kingdom of Benin. He was taken to the Caribbean and sold as a slave to a Royal Navy officer. As a writer, he was known as Gustavus Vassa, and he was eventually freed. He went on to marry a British woman and have two children.

Author Vincent Carretta describes the influence that Equiano’s autobiography had in the larger African slave narrative and the revelations from a many-sided figure.