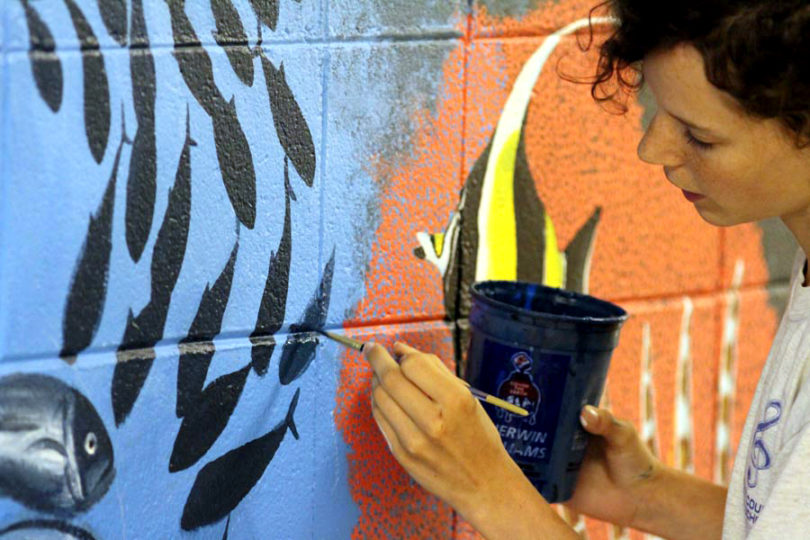 Athens, Ga. – A new “Seascape” mural at the University of Georgia will be formally unveiled Aug. 31 at 4 p.m. on the third floor hall of the biological sciences building. The depiction is a collaboration of the UGA Franklin College of Arts and Sciences division of biological sciences, the Lamar Dodd School of Art and the department of marine sciences.

“Seascape” is the first in a series of murals by the school of arts’ scientific illustration students to adorn the biological sciences building. The students are engaging their skills—which are focused on creating drawings and illustrations for medical and other scientific media—to enliven the halls where many UGA students take classes and to bring attention to the different areas of biological study on the campus.

This past summer, Regina Milner, O.C. Carlisle, Matt Sandoz and Kimberly Tiernan worked to complete the first mural. The project was part of an elective course on scientific illustration. The students worked with Gene Wright, who is a scientific illustration professor and interim director of the school of art, and faculty in the marine sciences department to decide what should be depicted and how to accurately do so.

“We were trying to get some organisms or systems that you might not typically see in a mural, but we tried to make it representative of a lot of different marine ecosystems,” said Brian Binder, head of the marine sciences department, who worked with the students on their plans. “For us especially, marine sciences is a little bit under the radar, and a lot of biology students don’t know that they can study marine sciences here at UGA. So it’s great to have such a beautiful advertisement that perhaps nudges them in that direction.”

Milner, a senior scientific illustration major from Dahlonega, has enjoyed the project. “It’s been great to learn how to edit and develop ideas for a project like this,” she said. “It takes patience and dedication to be able to edit your own work, so that’s been an important process in this work-creating the sketches and the layout for the mural.”

The students began the design process during the spring semester and completed their work in early August.

“Working in a professional environment with real clients and real projects is the best educational opportunity we can provide the students in the science illustration program,” Wright said. “Illustrators often have to decide the intent of a client based solely on verbal communication and without references or creative ideas. The ability to take verbal content and turn it into a work of scientifically accurate beauty takes skill, observation, communication and a dedication to the overall objective of the project.”

“My interest in bringing the halls of biological sciences alive with murals came from two inspirations: The first was the dramatic mural depicting evolution that once graced the ceiling of a lecture hall in the original biology building in the early 1900s,” he said. “The second was a student-initiated project to paint a mural depicting human anatomy and physiology, a mural that has graced the hallways of the third floor of biological sciences since 1996.

“Working with Gene Wright and his talented students, we are now completing the first of these murals.”

Wright and Farmer hope to have the students complete two murals per year. Murals to be completed next are ecology, entomology, microbiology and cell biology.