If our newly formed nation had to pick a Founding Father to transform higher education across America — and create a critical pillar of our fledgling democracy — Abraham Baldwin would have been an unlikely choice.

The son of a Connecticut blacksmith, Baldwin was only 30 years old when he crafted one of the most groundbreaking documents in our nation’s early history — the charter that established the University of Georgia as the birthplace of public higher education in America.

“Our present happiness joined to pleasing prospects should conspire to make us feel ourselves under the strongest obligation to form the youth, the rising hope of our Land,” Baldwin wrote in the charter, which was adopted 232 years ago by the Georgia General Assembly on Jan. 27, 1785.

“Think about it — they couldn’t even pay off their Revolutionary War debts, but they were looking for ways to provide public education for our students,” said Sylvia M. Hutchinson, a professor emerita of reading education and higher education who serves as a senior adviser in the UGA Division of Academic Enhancement. “These people were far-reaching in their thinking.”

The establishment of UGA as America’s first public university sparked a movement that continues to shape this nation — creating tens of millions of informed citizens, new scientists and innovative entrepreneurs every generation.

“In a global economy that requires both an educated citizenry and a robust national research enterprise, public higher education is not a luxury; it is the foundation of our competitiveness,” according to a recent report by the Lincoln Project, a bipartisan advocacy group of educators, business executives and political leaders.

And it all started here. 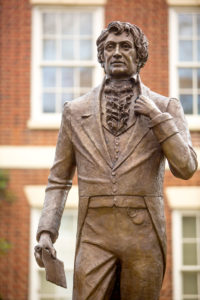 Abraham Baldwin statue with Old College in the background.

A graduate of Yale, an elite private college, Baldwin was from a middle-class family, believing that all citizens in a democracy have a right to an education.

A theologian and Christian preacher, Baldwin was also a licensed lawyer who crafted language that specifically forbade religious tests for students wishing to enroll.

Baldwin, who had declined to take a Yale faculty position, knew that Georgia’s new college needed a broad intellectual capacity that could support agriculture and commerce while developing administrative and management skills.

In short, Baldwin gave the people of Georgia the framework for a productive college that could adapt to and support the expanding needs of a growing state.

Baldwin, one of only two Georgians to sign the U.S. Constitution in 1787, served without pay as UGA’s president until 1801, during the institution’s formative years. Baldwin died in 1807 while a U.S. senator from Georgia.