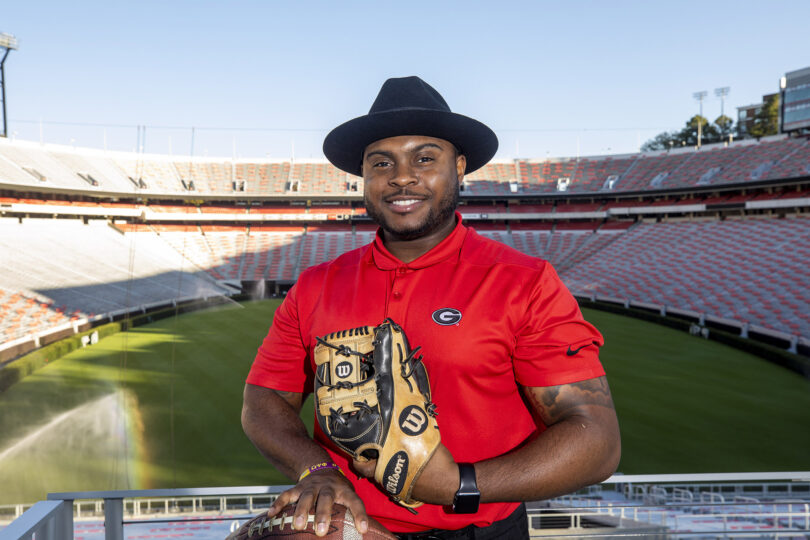 B.J. Armstead, a graduate student from Atlanta, has founded a sports counseling nonprofit that aims to educate young athletes on mental health. Currently finishing up a master’s degree in social work, Armstead next plans to a go to school for a doctorate in sports psychology. (Photo by Dorothy Kozlowski/UGA)

B.J. Armstead likes to say that he was born into social work.

Inspired by his mother’s counseling and therapy practice, Armstead is now finishing up the Master of Social Work program at the University of Georgia.

He grew up going on cases with her—and knew about DFACS and Medicare when he was as young as 8 years old.

He saw the impact of her work, and he too wanted to make a difference in the community. In particular, he was interested in mental health. “I know how important it was for people to release emotions. People tend to keep them in; I want to give people an outlet,” he said.

In 2019, he founded Apollo Sports Counseling, a nonprofit that holds workshops with athletes and does group and one-on-one counseling.

“Far too many times, athletes can have increased depression, stress, trauma and anxiety,” he said.  “With Apollo, I wanted to stop that as much as possible.”

His aim is to educate athletes on mental health. “So many athletes have been depressed and not said anything. They came out about it after their career was over: Terry Bradshaw, Serena Williams, Ken Griffey Jr.”

A lot of athletes are raising awareness for the issue—mostly at the professional level. Armstead wants to discuss mental health for younger athletes—at the middle and high school level—so that they know what they’re going through.

While mental performance is an emerging issue, Armstead’s reasons for the nonprofit are also deeply personal. 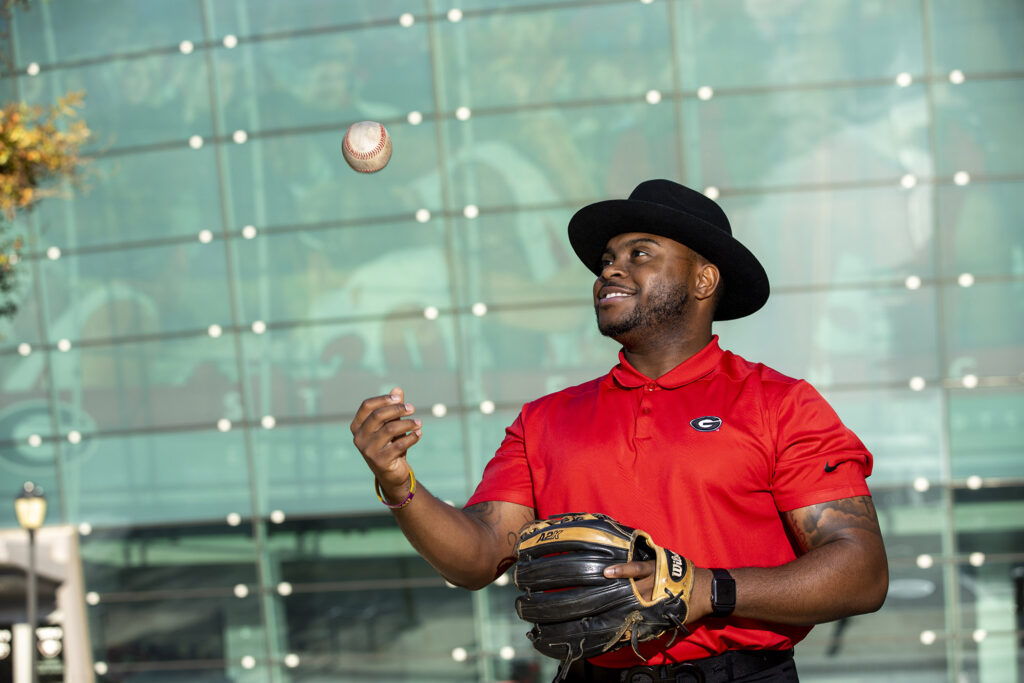 B.J. Armstead played organized baseball from age 3 until age 22 when he played on the Morehouse College baseball team. Now, he counsels young athletes on the mental aspects of sport—and encourages athletes to not let sports define their value as a person. (Photo by Dorothy Kozlowski/UGA)

Armstead grew up with baseball. The story goes that when he was 6 months old, his parents put a baseball, basketball, football and golf ball in his crib. He threw everything out but kept the baseball. At 10 months old, he could hit a plastic baseball off a T-ball set all the way across the house. At 3 years old, he was playing organized baseball, which he’d play until he was 22 years old.

“Baseball was my entire existence,” he said. “It’s taught me everything I know.”

At 13, Armstead was seriously considered by professional team scouts. He played on traveling teams. He worked out five times a day: weights before school, batting cage at 6 a.m., a lunch workout, team workout after school, and then more weights after team practice. “I was extremely ambitious. I wanted to be the best.” 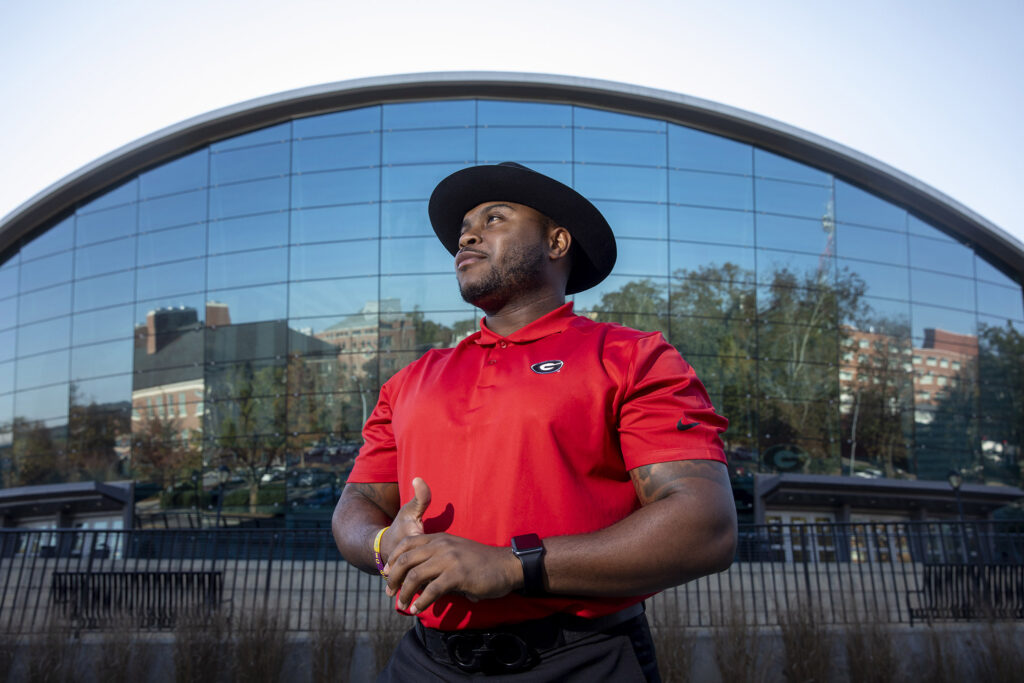 But with wanting to be the best comes pressure and stress.

“There were times when I went 0-3, with two errors in a baseball game. I couldn’t come out of my room for three weeks, because I’m mad about baseball,” he said.

At 16, he played summer ball on a team traveling the south. Only, he was the lone African American on the team and had to deal with racist comments every day.

“That summer, I felt like I had no one to talk to. I attempted suicide three times. And when you try and take your own life and it doesn’t work, you feel even more worthless,” he said. “It was a pivotal point [for me.] I knew something was not right. I’d never felt like this before. Why? Why was I feeling this extreme—to take my own life.”

Part of the problem was the culture and the idea that men aren’t supposed to express emotions. “Sports was something that defined our manhood, so we couldn’t show any weakness in athletics,” he said.

So instead of talking about it, Armstead held it in. But he also started reading everything he could about mental health and the mental side of sports.

Now, when he talks to young athletes, he uses himself as an example. Not to say that they too can get through the tough days, but as the reason why he does this. He wants to say: “I understand. I can empathize. I hear you. I’m here for you.”

His message to them is, “Sports is not who you are. It’s what you do. It does not define your value as a person. Separate yourself as a person from yourself as an athlete. Those are two different people.”

For Armstead, it meant seeing himself as an athlete and a scholar. During his senior year at Morehouse, Armstead was injured. While he was resting and missing baseball practice, he mentally made the transition away from baseball and started making plans for graduate school at UGA.

“My greatest asset is my mind and my ability to help people,” he said. He then started “running toward my purpose, running towards my gifts and my tools.” 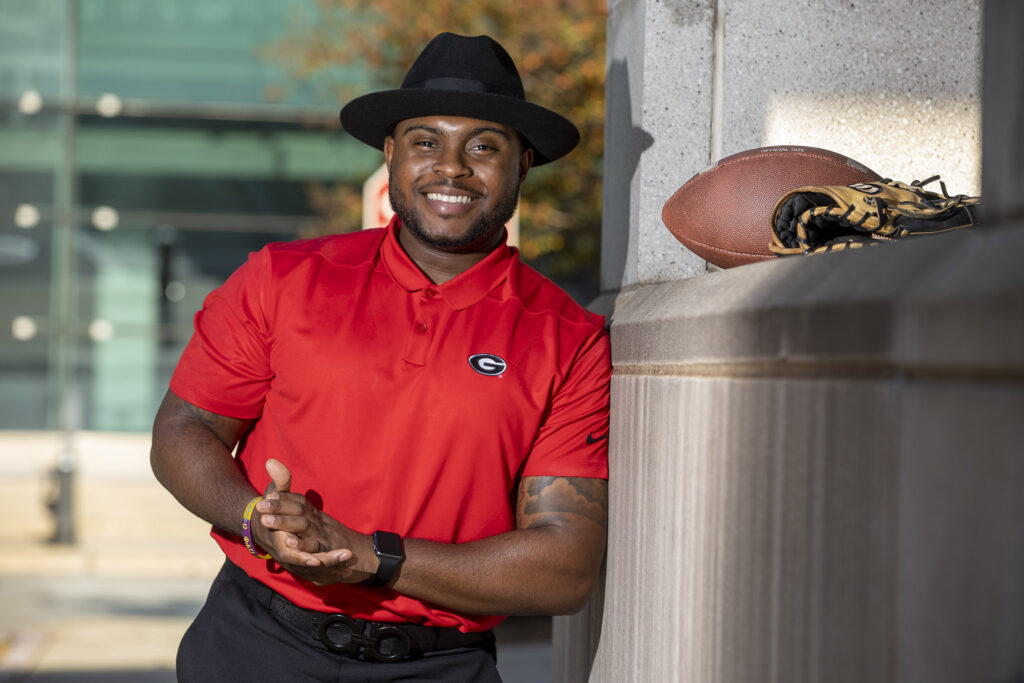 After finishing a master’s in social work in May, B.J. Armstead aims to work towards a Ph.D. in sports psychology—a subject he could study for hours. “For me, sports psychology is like going into Krispy Kreme when the hot sign is on,” he said. “I study the Sports Psychology for Dummies book. I can read it for hours.” (Photo by Dorothy Kozlowski/UGA)

At UGA, Armstead is interning in UGA’s athletic counseling department —where a counselors work with athletes to make sure they’re doing OK mentally and have a healthy relationship with their sport.

“We didn’t have that when I was growing up in Atlanta,” Armstead said. “Seeing the impact they have the athletes, how they’re helping the athletes as a whole, it’s been such a joy and a real blessing.”

Armstead is committed to helping athletes. “The very things that I went through when I was playing sports with mental health. Now, I want to assist athletes with that, in order to get them better.”

That means that after Armstead graduates in May, he’ll continue his education and work towards a doctorate in sports psychology.