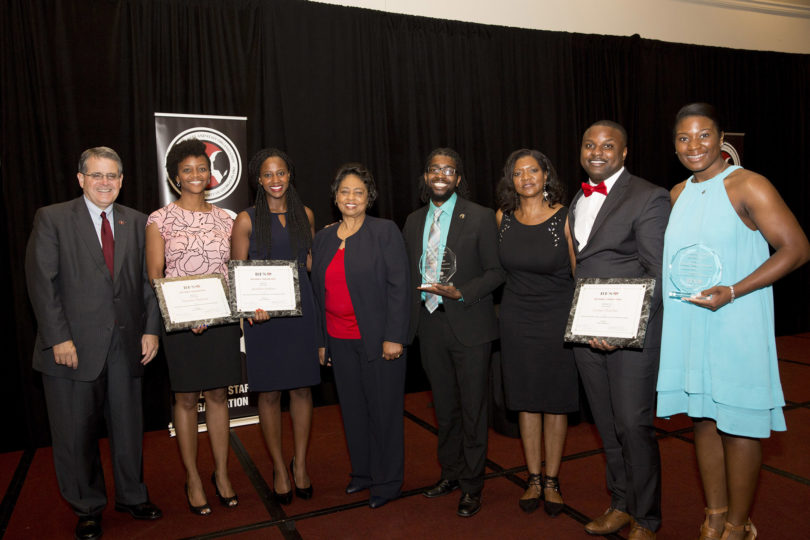 The focus wasn’t just on education at the 14th annual Black Faculty and Staff Organization Founders’ Award Scholarship Luncheon. It was also on what comes after the degree.

UGA President Jere W. Morehead welcomed the more than 350 attendees and spoke about the BFSO’s impact.

“I want to thank you for the work you’ve done,” he said. “It will take all of us here today to continue those efforts.”

Shirley Sherrod, executive director of the Southwest Georgia Project for Community Education Inc., gave the keynote address. She shared her journey from working with the Student Nonviolent Coordinating Committee as a college student to founding the Southwest Georgia Project and New Communities Inc. with her husband, the Rev. Charles Sherrod, to accepting a position as Georgia’s first African-American state director of rural development.

That journey started with the death of her father during her senior year of high school, after he was shot, reportedly over a dispute about livestock. His death changed the course of her life and cemented her desire to help others in rural communities.

At that time, her dream was to go to college in the North and stay there. After her father’s death, she realized that she could make a difference by staying in the South and working to better conditions for farmers like him.

“When you do the right thing, know that good will come back to you,” she said.

Sherrod emphasized two things she considers vitally important: getting an education and owning land. She also spoke about the value in taking that education and putting it to use in rural areas.

“We forget that you can make an even bigger name for yourself by going into communities that need your help,” she said. “It’s a win-win for everyone.”

Proceeds from the luncheon, held Sept. 9 at the Tate Student Center Grand Hall, go toward the BFSO scholarship fund and programming. At the event, a total of $4,000 in scholarships and awards were given to UGA students.

“The scholarships given today are an important component of what we need to continue to do,” Morehead said.