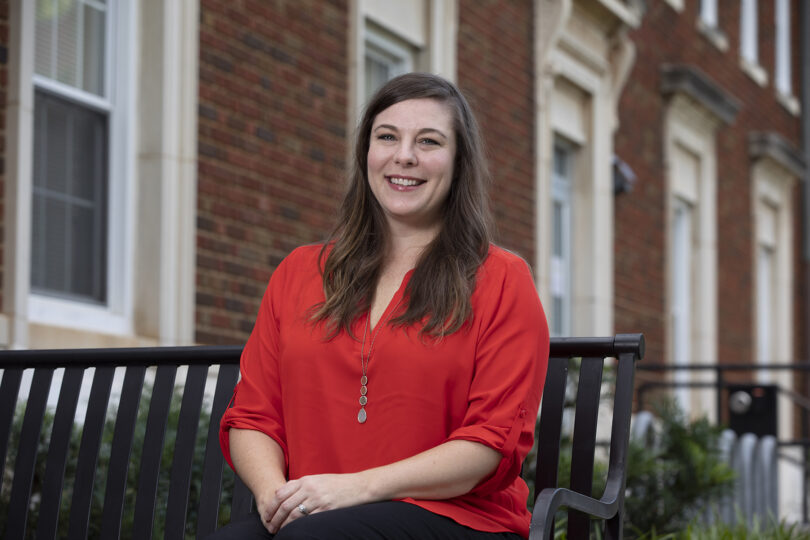 Maggie Blanton is the assistant director for services in the Division of Academic Enhancement. (Peter Frey/UGA)

Maggie Blanton remembers the exact moment as a college student when she realized that with regard to education, not everything is black and white.

Blanton, the assistant director for services in the Division of Academic Enhancement, said she remembers that one day, in a religion class, her professor “threw off the center of gravity” of what Blanton thought a college class had to be. The professor introduced the idea that WWE wrestling could be a religion, much to the students’ and Blanton’s surprise.

“I think about it often when we’re thinking about things like genuine curiosity and flipping the script on what you think about learning,” Blanton said. “It really taught me to think outside the box … It serves you so well to not just take what you know as fact, always—challenging ideas, concepts and norms can be really powerful.”

Since then, Blanton has used this concept of thinking beyond what’s inside the box through her role as the DAE’s assistant director for services.

Blanton comes from a long line of educators.

She has a sister who works at Northwestern University, and her mother is a retired librarian. Growing up, Blanton spent a lot of her time at Augusta University, then called Augusta College, where her mother worked. She got to see firsthand and at a young age what college was like and what its purpose was. Blanton credits this experience to her becoming a “lifelong learner.”

Blanton herself has worked at the University of Georgia for 12 years, and she said her love for education, learning and helping students came about naturally.

She began in 2008 as the administrative associate for the Office of Instruction. Now, Blanton has a new position title, and her role has changed a bit since she began. She supervises the services team with tutoring and academic coaching, serves on multiple university committees and collaborates with people outside her division for various initiatives and programs. Her favorite part of the job by far is academic coaching.

An individualized approach to student support

UGA offers students an appointment-based program to meet with trained academic coaches like Blanton to discuss their journey to success. Due to the COVID-19 pandemic, the sessions are all held online through Zoom.

Blanton said she usually starts a session off with discussing a student’s strengths. Then, they’ll do some envisioning and goal work to find out where the student wants to be in the near future and how they’ll get there.

“The real strength of academic coaching is the fact that it’s individualized to the students, so this isn’t a ‘one size fits all’ approach,” Blanton said. “We do have some research-based strategies that we can sometimes recommend, but ultimately, it’s the student who is the one guiding the conversation, and they decide what makes the most sense for them as far as next steps.”

Blanton said her love for helping students came from her early role as an administrative associate, where she often worked with students in tough situations, like academic honesty violations and second dismissals.

“I like learning the spectrum of the student experience, not just for students who are successful, but students going through really significant trials and tribulations,” Blanton said. “Then seeing that recovery and the resilience that comes alongside that was really cool.”

UGA students serve as her main motivator on a day-to-day basis.

“What motivates me is thinking about the student experience—about what they’re going through—and trying to do everything I can to think of how the institution can support them and provide an inclusive, supportive, engaging environment where they can hopefully thrive,” Blanton said.

Blanton said supervising is the most difficult part of her job, but at the same time, it’s also very rewarding.

“I put a lot of energy and thought into it,” she said. “You’re trusting your own voice, you’re wanting to empower people to do the right thing for the program and knowing that your voice isn’t always needed, and trusting when to speak up, when to stay quiet and when to take a step back.”

Although Blanton juggles many critical responsibilities, she avoids burnout by spending time with her family, reading historical British novels and watching re-runs of her favorite shows.

When Blanton looks to the future, she sees herself continuing to work with students. She said she’ll always be happy so long as she’s making a positive impact on students.

“I want to stay curious,” Blanton said. “I want to stay invested in students, keep reading, keep learning and then wherever that takes me, that’s where I’ll go.”