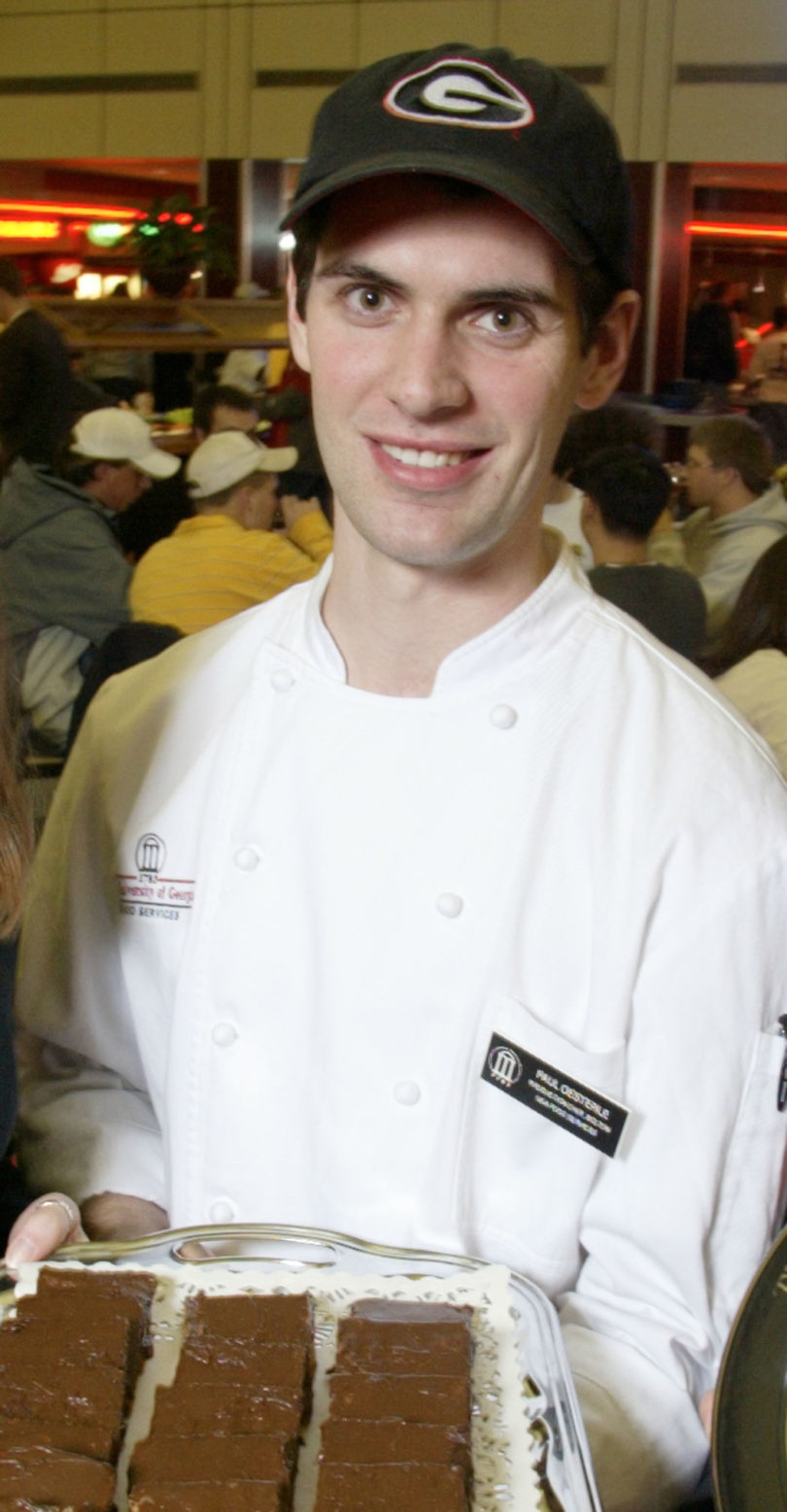 Paul Oesterle graduated from Johnson and Wales University in Rhode Island with degrees in culinary arts and food service management. Before coming to Athens

For months, Chef Paul Oesterle made and remade his tofu and calamata olive hand-rolled ravioli dish.

Timing his cooking down to the minute, the Bolton Dining Commons’ chef wasn’t preparing for a role on Food Network’s Iron Chef competition, though he may as well have been.

Tofu was the secret—or not-so-secret—ingredient at the National Association of College and University Food Services Culinary Challenge, where the UGA chef represented the Southern region in a national cook-off. Oesterle, who has worked in university food services for six years, won the Southern regional competition with his ravioli with sautéed wild mushrooms and green pea sauce recipe to advance to July’s Seattle showdown, which included educational classes as well as the six-chef, 75-minute national competition.

Trained in fine dining, the cafeteria supervisor used his time to boil, sauté, fry and demonstrate as many cooking techniques as he could.

“From a chef’s perspective, it was very challenging,” he said.

Unlike the television competition, the food services contest didn’t have sous chefs or a lavish kitchen full of ovens, grills and blow torches. All Oesterle had to work with were two induction burners, which are like stovetop burners except they only heat when in contact with metal.

Oesterle said it was tough to finish the gourmet recipe in one hour, but because of adrenaline he finished the dish faster than ever before—with two minutes left on the clock.

“It was a fun experience, especially attending the conference in Seattle,” he said.

UGA chefs have cooked their way to the national competition three times since the competition was established in 2000. They’ve yet to capture the title Chef of the Year from the National Association of College and University Food Services, but consistently perform as some of the best in the nation.

Oesterle, for example, was formally trained in fine dining, including a stint cooking in France.

He came to Athens after graduating from Johnson and Wales University in Rhode Island with degrees in culinary arts and food service management.

Having previously cooked for fine restaurants, including Les Trois Marches in Versailles and Opus 251 in Philadelphia, serving up spicy buffalo wings in Bolton Dining Hall was a little different for him, but nonetheless he’s very happy with it (as UGA Food Services has been rated one of the best college dining services in the nation).

He describes Bolton as a “great work environment,” and said that with his supervisory duties he gets to cook as much as he wants. Because he oversees the dining hall’s overall food production for three departments, on any given day he could be making spinach and goat cheese lasagna, salsa verde or peanut butter fudge cake.

As for Chef Paul’s famous hand-rolled ravioli, don’t look for it in Bolton Dining Commons any time soon.

The competition demonstrates the chef’s ability for fine dining, but hand-rolling ravioli for the dining hall’s 4,000 patrons might prove a tad time-consuming.

Instead, look for Chef Paul’s latest creations at the dining hall’s special events, which will include an “All Athens” dinner this year, with fare from Athens, Greece; Athens, Ohio; and cities with the same name around the globe.

Or, wait to see what he cooks up for next year.