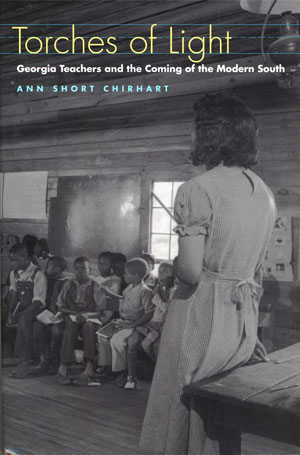 Torches of Light: Georgia Teachers and the Coming of the Modern South
By Ann Chirhart
University of Georgia Press
$19.95

As turbulent social and economic changes swept the South in the first half of the 20th century, education became the flashpoint. Published by the University of Georgia Press, Ann Short Chirhart’s Torches of Light is the first study to analyze such modernizing events in Georgia. An assistant professor of history at Indiana State University, Chirhart shows how these changes affected the creation of the state’s public school system and cast its ­teachers in a crucial role as mediators ­between transformation and ­tradition.

Although most teachers, black and white, shared backgrounds rooted in localism and ­evangelical Protestantism, attitudes about race and gender kept them apart. ­African-American teachers, individually and collectively, redefined traditional beliefs to buttress ideals of racial uplift and to press for equal access to public services. White women adapted similar beliefs in different ways to enhance their efforts to train greater numbers of white students for professional and wage labor.

As Chirhart examines the ideas over which Georgians clashed, she also shows how those ideas were embodied in New Deal and U.S. Department of Agriculture programs, the political activities of the black Georgia Teachers and Educators Association and the Georgia legislature’s 1949 Minimum Foundation Act.