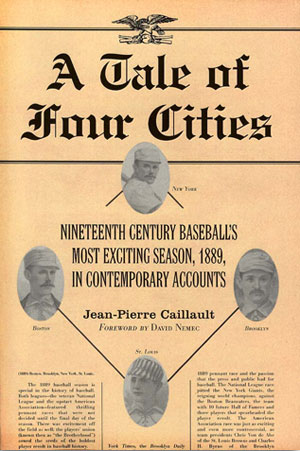 A Tale of Four Cities
By Jean-Pierre Caillault
McFarland and Company
$29.95

The 1889 baseball season is unique in the history of baseball. Both leagues-the veteran National League and the upstart American Association-featured thrilling pennant races that were not decided until the ­final day of the season. There was excitement off the field as well; the players’ union (known then as “the Brotherhood”) sowed the seeds of the most ambitious payer revolt in baseball ­history. That season is recounted in A Tale of Four Cities: Nineteenth Century Baseball’s Most Exciting Season, 1889, in Contemporary Accounts. The book is edited by UGA professor of astronomy Jean-Pierre Caillault, who also teaches classes on the physics of baseball and the history of the major leagues.

A Tale of Four Cities presents accounts from the major newspapers-the New York Times, the Brooklyn Daily Eagle, the Boston Herald and the St. Louis Post-Dispatch-of each of the four teams’ cities to capture the day-by-day excitement of the 1889 pennant race and the passion that the press and public had for baseball. The National League race pitted the world champion New York Giants against the ­Boston Beaneaters-teams that ­accounted for 10 Hall of Fame players and three players who spearheaded the player revolt.