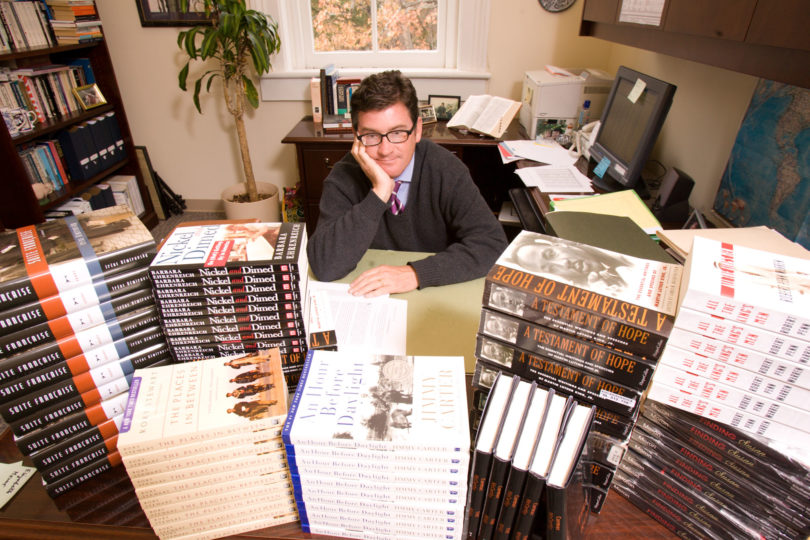 What do CDC disease investigators and America’s 21st century social and political climate have in common? These are two of the subjects recently tackled by students who have participated in the Honors Program’s new book discussion program.

“We’re always thinking about ways to create additional extracurricular educational opportunities as well as more creative ways to connect students and faculty,” said David Williams, director of the Honors Program. “The book discussion groups concept, which was a part of our five-year program plan, is a perfect way to do both.”

The honors book discussion program took shape in summer 2005 after discussions with Marisa Pagnattaro, an associate professor of legal studies in the Terry College of Business. She participated in a Terry faculty book group for a number of years and believed such a program would be successful at the student level.

Several book discussions were piloted in the Foundation Fellows Program with good results, and then expanded to other Honors students when the response was overwhelming.

“We wanted to encourage students to read interesting books outside of their classes and, at the same time, create at least the possibility for a more organic approach to faculty mentoring,” said Steve Elliott-Gower, associate director of the Honors Program and coordinator  of the book discussions.

“We initially organized six book discussions in fall 2006, and I had over 300 e-mails from students who wanted to participate in the first two or three days after the announcement went out,” he said. “It was enormously encouraging and rewarding, and we immediately added four more and committed to organizing ten per semester.”

The discussion groups usually involve 10 students each and are facilitated by faculty who select books that can cover a wide range of topics. The groups have an initial meeting where introductions are made and the books are distributed, and then reconvene over dinner at the faculty members’ homes to discuss themes and issues from their reading.

Corrie Brown, a professor of veterinary pathology, went a step further when her group read Maryn McKenna’s Beating Back the Devil in the fall. The book is an account of the Epidemic Intelligence Service, a medical epidemiology program of the CDC.

She invited two veterinary ­students, Stic Harris and Hiro Iwamoto, to discuss how young epidemiologists are dealing with current disease issues. Harris had already earned a master’s of public health degree, while Iwamoto’s sister is one of the doctors featured in the book.

“Education shouldn’t be in a vacuum,” said Brown. “This connection to a current best-seller about issues that are relevant and that involve real people who work just down the road was helpful. I saw students’ eyes get wide as they heard Hiro Iwamoto talk about his sister’s experiences in the EIS.”

Along with promoting interactions between faculty and students, the discussion groups provide students an opportunity to explore areas of interest outside the classroom.

Hadas Peles, a junior in history and political science, enjoyed discussing Jimmy Carter’s Our Endangered Values. Although she did not agree with Carter’s writings, she said that the experience prompted her to read his most recent book and write a letter to him explaining her reactions to his writings. She hopes he responds to her critique.

“When I look back on my college experience,” said Peles, “it will be no exaggeration to say that this book club was an integral part of my growth.”