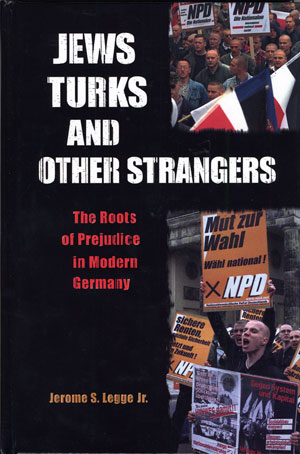 Written by Jerome Legge Jr., associate dean of UGA’s School of Public and International ­Affairs, Jews, Turks and Other Strangers: The Roots of Prejudice in Modern Germany studies the causes of prejudice against Jews, foreign workers, refugees and immigrant Germans in contemporary Germany. Using survey material and quantitative analyses, Legge challenges the notion that German xenophobia is rooted in economic causes. Instead, he sees a more complex foundation for German prejudice, particularly in a reunified Germany where perceptions of the “other” sometimes vary widely between east and west, a product of a traditional racism rooted in the German past. By clarifying the foundations of xenophobia in a new German state, Legge offers a clear and disturbing picture of a conflicted country and a prejudice that not only affects Jews but also fuels a larger, anti-foreign sentiment.

“If we are to understand the social complexity of the new Germany,” Legge writes in the book’s introduction, “it is more realistic to view it as a multicultural society that is having difficulty in integrating these new groups into its mainstream. Although much progress has been made, especially with regard to the Turks and the Jews, the nation still is in the midst of a long struggle with its future identity.”