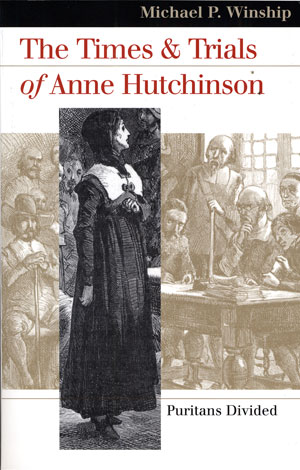 Anne Hutchinson was perhaps the most famous Englishwoman in colonial American history, viewed in later centuries as a crusader for religious liberty and a prototypical feminist.

In The Times and Trials of Anne Hutchinson, ­Michael P. Winship, UGA history professor, provides a new and fresh account of her oft-told tale, disentangling what really happened from the legends that have misrepresented her for so long.

During the 1630s, religious controversies drove a wedge into the puritan communities of Massachusetts. Anne Hutchinson and other members began to speak out against mainstream doctrine, while ministers like John Cotton argued for personal discovery of salvation. The puritan fathers viewed these activities as a direct and dangerous threat to the status quo and engaged in a fierce and finally successful fight against them. Refusing to disavow her beliefs, Hutchinson was put on trial twice and banished from the colony.

Combing archives for neglected manuscripts and ancient books for obscure references, Winship gives new voice to other characters in the drama whose significance has not previously been understood. He also analyzes the political struggle that almost destroyed the colony and places Hutchinson’s trails within the context of this turmoil.