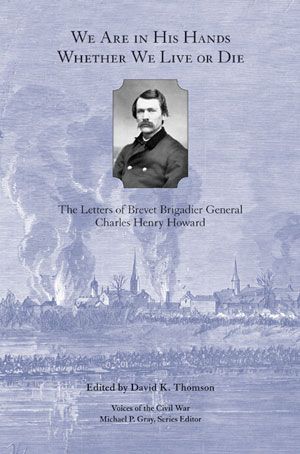 We Are in His Hands Whether We Live or Die: The Letters of Brevet Brigadier General Charles Henry Howard
David K. Thomson
University of Tennessee Press
$52

David K. Thomson, a UGA doctoral student, has released a new book, We Are in His Hands Whether We Live or Die: The Letters of Brevet Brigadier General Charles Henry Howard.

Many soldiers who served in the American Civil War found solace in their faith during the most trying times of the war. But few soldiers took such a providential view of life and the Civil War as Charles Henry Howard, who fought for the Union cause.

Howard’s letters cover a wide-ranging period, from 1852 to 1908. His concern for his family is typical of a Civil War soldier, but his exceptionally firm reliance on divine providence is what makes these letters an extraordinary window into the mind of a Civil War officer. Howard’s grounded faith was often tested by the viciousness of war, and as a result his letters are rife with stirring confessions and his emotional grappling with the harsh realities he faced. Howard’s letters expose the greater theological and metaphysical dilemmas of war faced by so many on both sides.