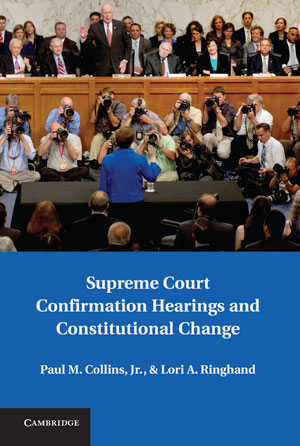 Before Supreme Court nominees are allowed take their place on the high court, they must face a moment of democratic reckoning by appearing before the Senate Judiciary Committee. Despite the potential this holds for public input into the direction of legal change, the hearings routinely are derided as nothing but empty rituals and political grandstanding.

In Supreme Court Confirmation Hearings and Constitutional Change, authors Paul M. Collins Jr., University of North Texas, and Lori A. Ringhand, the J. Alton Hosch Professor of Law in UGA’s School of Law, present a contrarian view that uses both empirical data and stories culled from more than 70 years of transcripts to demonstrate that the hearings are a democratic forum for the discussion and ratification of constitutional change. As such, they are one of the ways in which “We the People” take ownership of the Constitution by examining the core constitutional values of those permitted to interpret it on our behalf.