“The American Chestnut” tells a history of America’s historic tree from Native American prehistory to the Civil War to the Great Depression as it was an active part of many American lives. The American chestnut once spanned from Maine to Louisiana, and from Wisconsin to Oregon, filling forests. 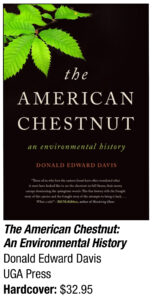 Used for woodworking, fencing and construction, the American chestnut population has dwindled, becoming functionally extinct. A blight fungus was introduced into the United States during the 19th-century, demolishing what was left of the towering giants. Its eradication caused a great environmental catastrophe, as many people and animals depended on the chestnut for food and resources.

Following the story of the tree, “The American Chestnut” describes the blight and decline of an incredibly dominant species and efforts that were made to try and save the historic tree, hoping to restore its place in American forests.