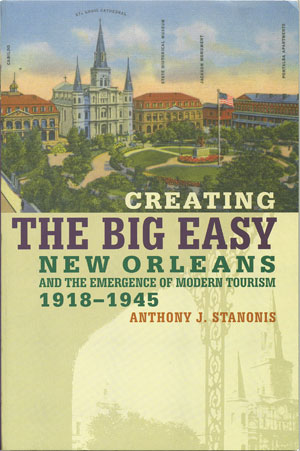 Creating the Big Easy: New Orleans and the Emergence of Modern Tourism 1918–1945
By Anthony J. Stations
University of Georgia Press
$22.95

It’s refreshing to hear Anthony Stations’ take on the creation of America’s “most foreign” city.

After so much talk about the loss of the seductive joy and romantic exoticism of New Orleans, its emergence from a corrupt Southern town into an international sensation in Creating the Big Easy: New Orleans and the Emergence of Modern Tourism 1918-1945 reads like a lost prequel, telling the story of what’s missing in the town today.

Printed by the UGA Press, the book traces literary, ethnic, political and cultural forces that shaped New Orleans into its role as a debaucherous tourist magnet between the World Wars.

From its French roots and one-of-a-kind architecture to strong-armed politicians, the Crescent City has its fair share of interesting tidbits.

Thanks to exhaustive research lifted from sources such as the chambers of commerce, preservationists, tourists, teachers and novelists, the books takes readers on a tour of the New Orleans that was, explaining the facts and mythologies behind the French Quarter, Vieux Carré, Bourbon Street and Mardis Gras.