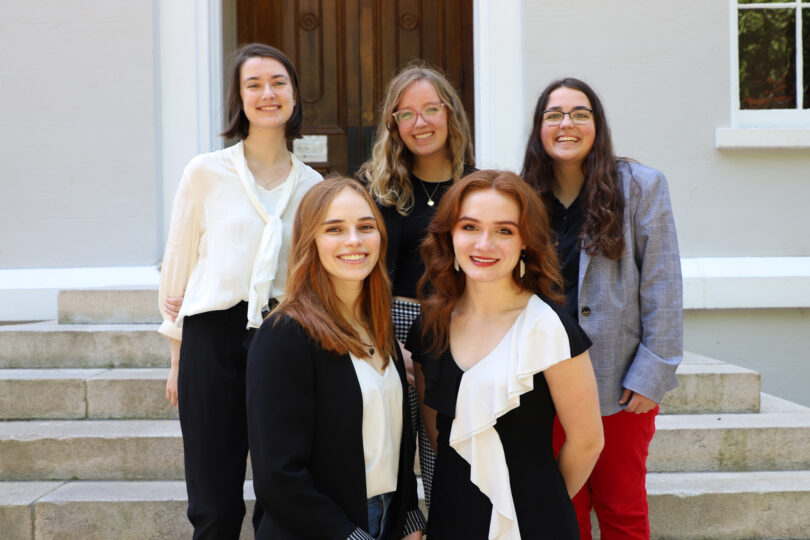 The scholarships are for students studying critical foreign languages

With a record number of eight undergraduates selected as Boren Scholars this spring, the University of Georgia ranks third in the nation on the list of top-performing institutions for Boren Scholarships for 2022. These students will receive funding to study critical languages abroad in exchange for a year of federal service.

“The broad impact of critical language studies has long been felt across our institution, and our students, whether they are learning on campus or studying languages abroad, deepen their global understanding through programs like the Boren Awards,” said Meg Amstutz, interim associate provost and dean of the Morehead Honors College. “We are thankful for the opportunities these awards provide to UGA students.”

In 2022, 208 undergraduates across the country received Boren Scholarships and 121 graduate students received Boren Fellowships. The award is designed to add important international and language components to students’ educations by giving them the opportunity to study overseas in world regions critical to U.S. interests.

The national initiative is administered by the Institute of International Education on behalf of the National Security Education Program. Boren Award recipients commit to working in the federal government for at least one year after graduation in exchange for up to $25,000 in funding.

“We are incredibly proud of our Boren Scholars and grateful for our strong collaboration with UGA’s Russian and Portuguese Flagship programs,” said Elizabeth Hughes, student affairs professional in the Morehead Honors College and Boren Awards campus representative. “Our students are well-prepared to launch careers in national security and public service after completion of their Boren programs.”

One recipient—Leah Whitmoyer of Tucker—will use the award to study Arabic in Jordan. She is a second-year Honors student and Foundation Fellow majoring in biological science.

A student in UGA’s Portuguese Flagship Program, Neely McCommons of Bishop, will study Portuguese and complete an internship during her capstone year in Brazil. McCommons is a second-year Honors student majoring in Latin American and Caribbean studies, international affairs and women’s studies with minors in Spanish and Portuguese.

The following six recipients—who are all in UGA’s Russian Flagship Program—were awarded a Boren Scholarship to support their participation in a capstone year program to study Russian and complete an internship.

Sydney Buchanan of Augusta is a third-year student majoring in Russian and international affairs.

Robert Fox of Marietta is a fifth-year student majoring in Russian and Romance languages and minoring in international affairs.

Lauren Harvey of Norfolk, Virginia, is a third-year student majoring in Russian and international affairs.

Natalie Navarrete of Boca Raton, Florida, is a third-year Honors student and Foundation Fellow majoring in Russian, Spanish and international affairs and minoring in Latin American and Caribbean studies.

Dana Newman of Fayetteville is a fourth-year student majoring in Russian, international affairs and anthropology.

Moriah Thomas of Good Hope is a fourth-year student majoring in Russian and international affairs.

“The high rate of success and the number of Boren scholarships awarded to our students this year are exceedingly impressive,” said Victoria Hasko, director of the UGA Russian Flagship Program and Faculty Fellow in the Center for International Trade and Security. “It is gratifying to see the Language Flagship curriculum model thrive at UGA, and we are proud to see the recognition and support that our students have earned through dedication to critical language studies spanning their undergraduate careers.”

The list of top-performing institutions for Boren Scholarships for 2022 is available at https://www.borenawards.org/statistics.