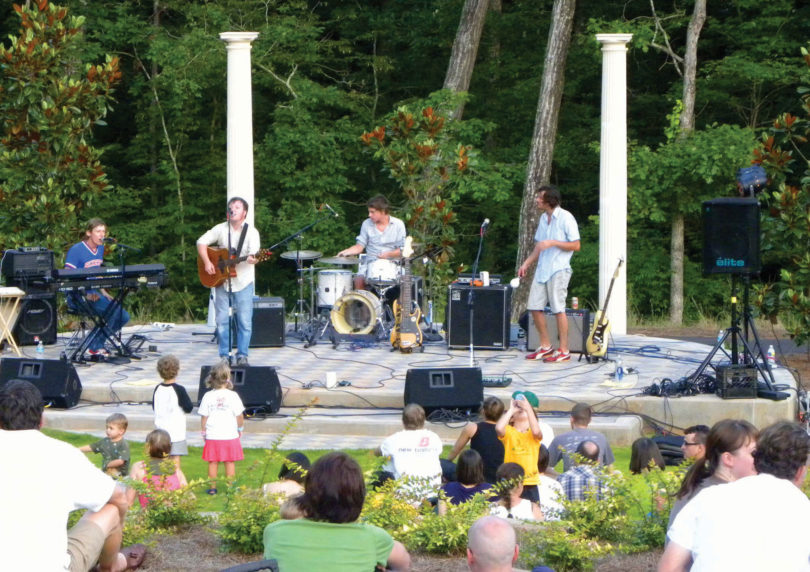 The Modern Skirts playing in 2017 at the Sunflower Music Series in the Flower Garden of the State Botanical Garden.

The State Botanical Garden will hold its 11th annual Sunflower Music Series with four concerts this summer. Each concert runs from 7-9 p.m. on the stage of the new Flower Garden, a terraced area between the Day Chapel and the Visitor Center and Conservatory.

Tickets are $15 each, $10 for Friends of the Garden members and $5 for children ages 6-12. Season tickets for all four concerts are $50, $35 for Friends and $15 for children ages 6-12. Admission to each concert includes beverages and light snacks. Attendees are encouraged to bring blankets and picnic suppers. Lawn chairs are only allowed for those with physical limitations. In case of inclement weather, the concerts will be held inside the Visitor Center and Conservatory.

The concerts kick off June 21 with the Modern Skirts, a local alternative rock band known for soft piano ballads and pop-rock guitars. The group was voted best local pop band in 2009 by Flagpole Magazine readers. Nate Nelson opens the show.

On Aug. 23, Grogus, will perform two sets. Grogus plays Latin jazz, traditional Cuban and Caribbean styles, and funk versions of jazz standards. The band has won the Flagpole Athens Music Award in both the jazz and world music categories.

Tickets are available by calling (706) 542-1244, at Schoolkids Records in downtown Athens or online at AthensMusic.net.