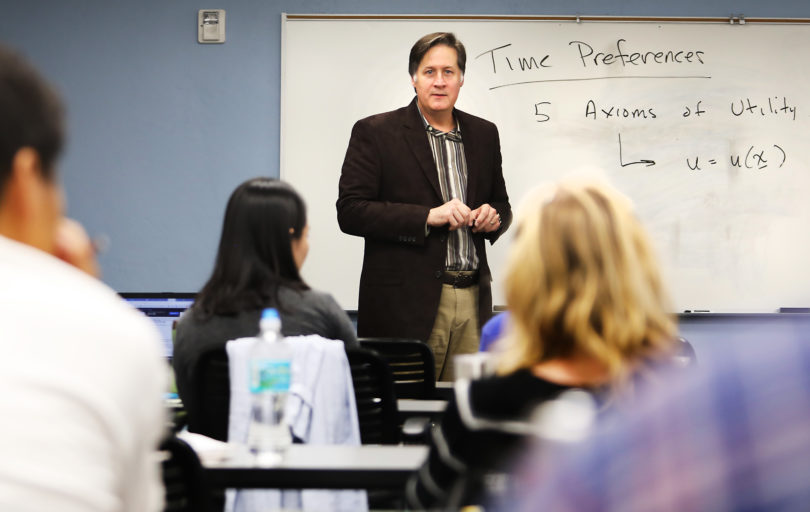 David Bradford lecturing in his classroom at UGA.

Research digs into the reasoning and decision-making for "hyperbolic discounting."

Time discounting, when a person cares less about a future consequence than a present one, is considered a “fundamental characteristic of human decision-making,” Bradford said.

For example, a person may choose to have a cupcake today, even though they are trying to lose weight.

Within the field of economics, it’s often observed that a person will choose a smaller good today over a larger good later. But the further the decision is in the future, the more likely they are to choose the larger good.

This means if a person was offered $50 today or $100 next week, a surprising amount of people choose the $50 today, even though they understand it’s much less money. But when asked about making the decision in the future — $50 in two years or $100 in three years — the majority choose the higher amount.

This concept is called hyperbolic discounting. The idea is that people make dramatically worse decisions when thinking of the present and short term, but their decision-making stabilizes over time.

Several theories have been developed to explain this phenomena, but not all researchers are convinced “hyperbolic discounting” is what’s occurring.

This lack of consensus prompted Bradford, along with colleagues at the London School of Economics, to create an experiment designed to tease out what really is happening.

Bradford specifies that they do see a dramatic difference between same day choice comparisons like the cupcake example, sometimes called “first day effects,” but from “tomorrow” on the choices people make are fairly consistent.

These findings indicate that hyperbolic discounting may just be a result of expecting people to understand objective time, rather than a real difference in preferences. Bradford concluded, “People seem to be more consistent than we give them credit for.”

While explaining the impact of this line of research, Bradford alludes to the beginning of the human race. “Given that our survival depended on being able to scavenge food, it’s not surprising that a preference for the present is written into our DNA.”

He said, “A human that turned away a meal just because they weren’t hungry right then was a human who might not survive.”

He explained that a strong preference for the present isn’t necessarily a bad thing because there are very few situations when a person is truly choosing between a consequence today or tomorrow.

Except in cases of addiction. In the case of quitting an addictive substance, a user can plan to quit “tomorrow” but it will never happen unless they are able to make the decision “today.”

For this reason, Bradford hopes that this line of research will help people to see addiction as “future discounting gone haywire” instead of as a moral failing.

He believes that psychologists and physicians treating people with substance use disorders can use this research to help people in treatment make better decisions.

The article is now available online from the Journal of Risk and Uncertainty.