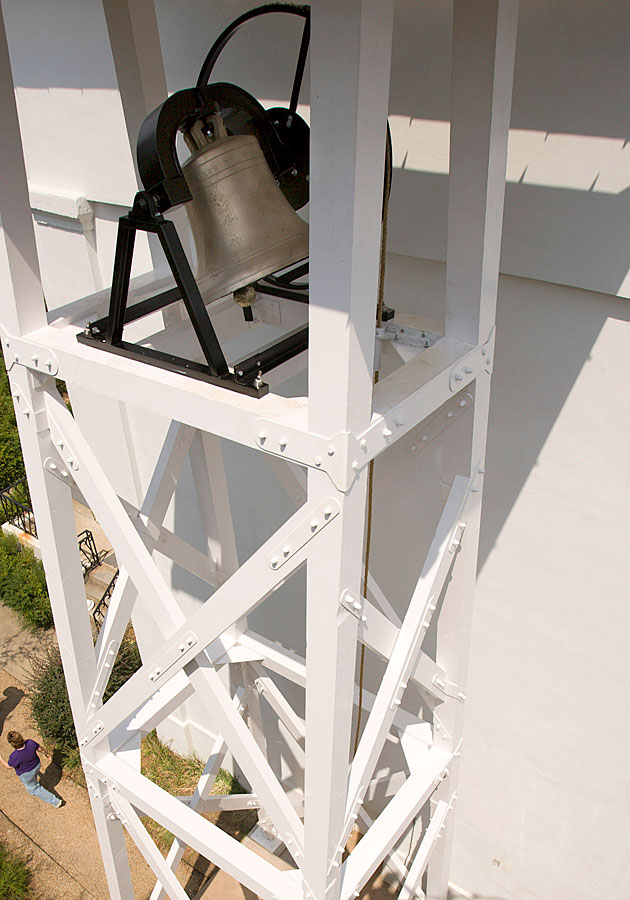 Athens, Ga. – Gleaming brightly and safely secured in a sturdy new tower, the historic University of Georgia Chapel Bell will be back in place when fall semester classes start Aug. 18 and ready to celebrate a victory when the Georgia Bulldogs play their first football game Aug. 30.

A new bell tower, meticulously hand-built by UGA physical plant workers, will be erected behind the Chapel beginning Wednesday morning. The 173-year-old bell, cleaned and polished to a brilliant sheen, will be installed Friday. Physical plant workers will give it a ceremonial “first ring” at 3 p.m. Friday.

The bell and old tower were taken down last spring when university officials decided the tower, which dated back to about 1913, could no longer safely hold the 700-pound bronze bell. Over the summer, physical plant workers spent many hours building a new tower, which closely resembles the original in height (40 feet) and shape.

Tom Satterly, assistant vice president for physical plant, said the new tower uses a newly manufactured mechanism to suspend the bell that is similar to the original yoke resting in two A-frames. But he said the new tower, made of tough Douglas fir, will be much stronger and safer because it incorporates modern engineering standards that ensure the bell won’t jump out of its moorings, as happened last fall when Bulldog fans rang it for hours after Georgia’s victory over Florida.

Satterly said the new tower has a roof that matches the Chapel roof. A new, stronger wheel will rotate the bell, and there is a new rope to pull the bell.

Workers in several physical plant shops including carpentry, sheet-metal, welding and roofing helped build the new tower. Ralph Johnson, associate vice president for physical plant, commended the construction crew and all the other workers who participated in the task.

“All the employees who worked on this project took great personal, painstaking interest to ensure the quality of the work,” Johnson said. “They put a lot of pride into this, and Georgia fans owe them a big thank you for their dedication and hard work.”

Satterly said some wood from the original tower has been saved and may be used in future restorations of historic university buildings.

While the tower was being built, the bell–cast in 1835 in Medway, Mass.– was in Cincinnati, Ohio, for a thorough refurbishing. Workers at the Verdin Co., a firm that specializes in bell restorations, removed years of accumulated rust and grime, including remnants of paint reputedly used by Georgia Tech students to paint slogans on the bell in the 1920s. Polished and covered with a preservative, the formerly greyish-black bell now has a radiant golden luster.

Physical plant workers moved the new tower to the Chapel Tuesday afternoon and work will begin Wednesday to mount it on a concrete foundation. By Thursday afternoon it should be completely erected and rigging for the bell will be installed. The bell will be brought back to the site and installed Friday morning.

Representatives from the various physical plant departments involved in building the tower and refurbishing the bell will jointly pull the bell rope at 3 p.m. for the ceremonial first ring, and the bell will be ready for celebration when Georgia plays Georgia Southern University in Sanford Stadium on Aug. 30.