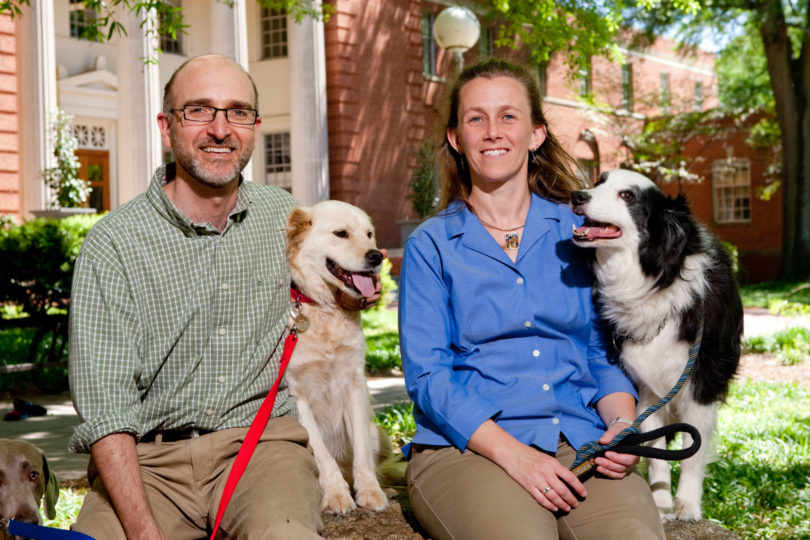 Athens, Ga. – Dog owners and veterinarians have long relied on a mix of limited data and anecdotal evidence to assess which breeds are at risk of dying from various conditions, but a new University of Georgia study provides a rare and comprehensive look at causes of death in more than 80 breeds.

The study, published in the current edition of the Journal of Veterinary Internal Medicine, can be used to create breed-specific health maintenance programs and is a starting point for future studies that will explore the genetic underpinnings of disease in dogs.

“If we can anticipate better how things can go wrong for dogs, we can manage their wellness to keep them as healthy as possible,” said study co-author Dr. Kate Creevy, an assistant professor in the UGA College of Veterinary Medicine.

Creevy and her co-authors examined data from the Veterinary Medical Database to determine the cause of death for nearly 75,000 dogs over the 20-year period of 1984 through 2004. They classified the deaths by organ system and disease process and further analyzed the data by breed, age and average body mass. Eighty-two breeds are represented in their study, from the Afghan hound to the Yorkshire terrier.

Creevy noted that the previously unknown high risk of cancer in the Bouvier, a relatively rare breed, highlights the power of their comprehensive approach.

“With rare breeds, an individual veterinarian may not see enough cases to be able to develop the opinion on whether the breed has a high incidence of conditions such as cancer,” Creevy said. “But if you analyze records that have been compiled over 20 years, you can detect patterns that you wouldn’t otherwise notice.”

Study co-author Daniel Promislow, a genetics professor in the UGA Franklin College of Arts and Sciences, said the study may help solve one of the great enigmas of canine health. “Normally, if you compare different species of mammals, big ones live longer than little ones-elephants live longer than mice, and sheep are in the middle, for example-and that pattern holds pretty well across hundreds of different species of mammals,” Promislow said. “Within dogs, the opposite occurs; the little dogs live longer.”

The researchers found that larger breeds are more likely to die of musculoskeletal disease, gastrointestinal disease and, most notably, cancer. Smaller breeds had higher death rates from metabolic diseases, such as diabetes and Cushing’s disease.

Promislow said dogs are an ideal species in which to explore the genetic basis of disease. There’s an unparalleled degree of diversity among breeds-compare Chihuahuas to Great Danes, for example-yet all dogs are of the species Canis lupus familiaris. Within breeds, on the other hand, dogs are genetically very similar.

Scientists first mapped the dog genome in 2003 and have since compiled data on genetic variation at single points on the genome for more than 80 breeds. By combining the genetic data with the data from their study, the UGA team can search for genes that influence the risk of diseases such as cancer.

Promislow pointed out that because the building blocks of the dog genome and the human genome are the same, understanding the genetic basis of disease in dogs can inform human medicine. If specific genes are found to play a significant role in Cushing’s disease in dogs, for example, scientists can assess whether the same process occurs in humans with the disease, with the ultimate goal of creating new strategies for early diagnosis and subsequent treatment.

“Is genetic variation for disease due to a few genes that vary in the population and have a big effect or dozens or hundreds of genes with small effects? That’s a basic biological question that we can address,” Promislow said. “There’s potential to learn a lot about the genetics of disease in general using the dog as a model.”

Promislow approached Creevy with the idea of collaborating after acquiring gigabytes of data that required a veterinarian’s expertise to analyze. Much of the initial data analysis was performed by former veterinary internal medicine resident Jamie Fleming, who is now in private practice in Port Washington, Wis.

Creevy noted that Promislow’s background in evolutionary biology allows the team to explore questions that have implications far beyond veterinary medicine. She also pointed out that their collaboration underscores the potential of interdisciplinary research. “This study is a good example of the unique things that can happen at a research university,” Creevy said.