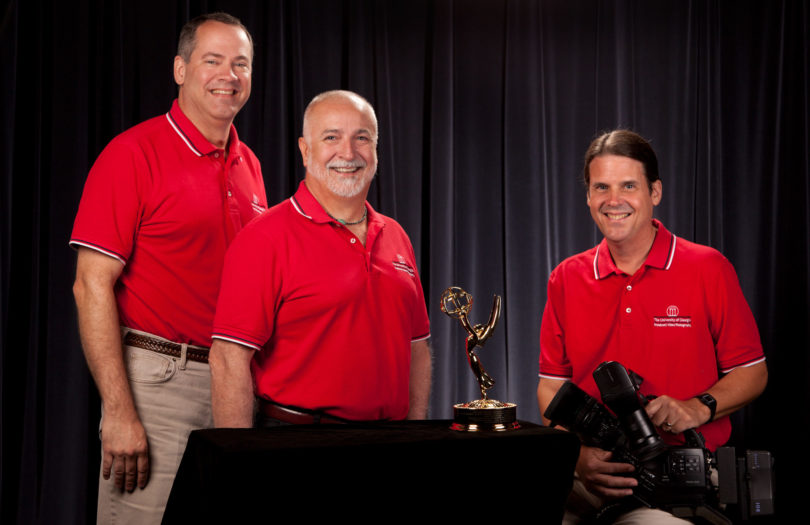 The broadcast, video and photography unit in the Office of Public Affairs has received a Southeastern Regional Emmy Award for Black and Blue: Beneath the Gulf Oil Disaster, a documentary on the work of UGA researchers following the 2010 oil spill in the Gulf of Mexico.

The award was presented at the annual awards ceremony of the Southeastern Region of the National Academy of Television Arts and Sciences held at the Hyatt Regency in Atlanta in June. Receiving the award were Steve Bell, director of the unit and editor of the documentary; Geof Gilland, computer graphic designer, who created graphics and animation for the project; and Bill Evelyn, videographer and field producer, who captured the video for the documentary. Other staff members involved in the production included Pete Konenkamp, broadcast media marketing relations; Kim Dillard, production manager; Andrew Rhiem, uplink coordinator; and Mike Barrett, studio director.

The documentary follows Samantha Joye, UGA Athletic Association Distinguished Professor of Arts and Sciences, and her team aboard the vessel Walton/Smith as they conducted research in response to the spill, which occurred in April. Joye, a professor of marine sciences in the Franklin College of Arts and Sciences, was among the first scientists to report the discovery of deep water plumes emanating from a broken well head and the resulting devastation that occurred on the ocean floor.

Evelyn spent more than two weeks filming Joye and her team of researchers as their discoveries were made. The documentary was picked up by national and international media, “…allowing the world to gain a better understanding of the impact of this man-made disaster,” said Bell.

The Southeastern Region of the National Academy of Television Arts and Sciences includes television stations in major markets throughout the southeastern portion of the U.S., including Atlanta, Greenville and Birmingham.