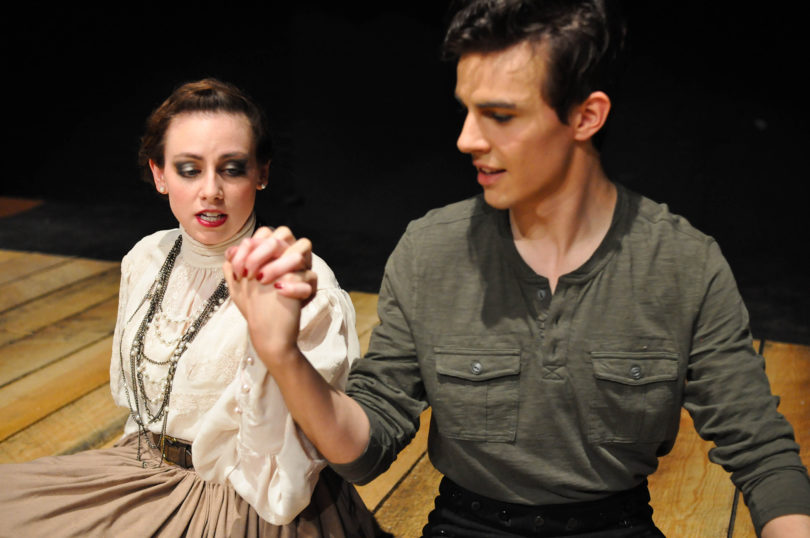 Senior theatre major Ashley Ware of Dacula plays the part of Wendla in the University Theatre performance of "Spring Awakening" along with senior theatre and English major Connor Brockmeier of Woodstock as Melchior. (Credit: Kristyn Nucci/UGA)

Musical a fusion of adolescent searching, raging hormones and rock and roll

Athens, Ga. – University Theatre at the University of Georgia will present the sexually charged rock musical “Spring Awakening,” composed by Duncan Sheik with book and lyrics by Steven Sater, on April 10-12 and 15-18 at 8 p.m. with matinees April 13 and 19 at 2:30 p.m. in the Fine Arts Theatre.

The production is directed by Richard Garner, co-founder and artistic director of Georgia Shakespeare.

A recent hit on Broadway, “Spring Awakening” adapts German playwright Frank Wedekind’s 1891 “Spring Awakening: A Children’s Tragedy,” which was a commentary on the era’s climate of sexual repression.

Garner calls Wedekind’s work “a landmark play in the history of modern drama that gave us a pained look into the confused youth who had to make their way through a claustrophobic world that denied them a satisfactory understanding of the storm that was raging within their own adolescent bodies.”

Scandalous at the time, Wedekind’s original play was at times banned, censored, threatened with closure and deemed pornographic because of the frank way it dealt with teenage sexual awakening.

“The times may have changed,” Garner said, “but the angst of coming to terms with the adolescent transformation of our very physical being remains true through the ages and is sometimes just as controversial.”

The musical adaptation maintains the tone of the original while adding concert moments with original songs written by Sheik, a singer-songwriter and composer known for his 1996 debut single “Barely Breathing.” During spoken dialogue, the play is set firmly in late 19th-century Germany, while during the songs, the style shifts and the characters perform in a present-day concert environment with interactive media effects.

“The concert moments permit the characters to step out of their isolation and speak freely about what they are feeling,” Garner said. “As our young characters express in contemporary song the frustrations they wrestled with 120 years ago, we see in them the timeless struggle to figure out what it means to be human today. While the lighting might have moved from gas-lit sepia to rock concert electric, the rage within remains the same.”

David Saltz, head of the department of theatre and film studies, said they “are thrilled to have the opportunity to work with Richard Garner, who is one of most accomplished and celebrated directors in the Southeast.”

In addition to numerous directing credits at Georgia Shakespeare, Garner has worked extensively at Atlanta’s Alliance Theater and most other prominent professional theatres in the region. A past president of the Shakespeare Theater Association of America, he has received numerous awards and honors including a Lifetime Achievement Award from the Georgia Theater Conference, the 2012 Suzi Bass Award for Best Director and an ABBY Award for Outstanding Arts Professional from the Arts and Business Council of Atlanta and is a LEXUS Leader of the Arts in Atlanta.

This production contains adult content and is not suitable for all ages. Tickets are $16 for the general public and $12 for students and can be purchased at http://www.drama.uga.edu/box-office, by phone at 706-542-4400, in-person at the Performing Arts Center or Tate Student Center box offices or at the door before the show.