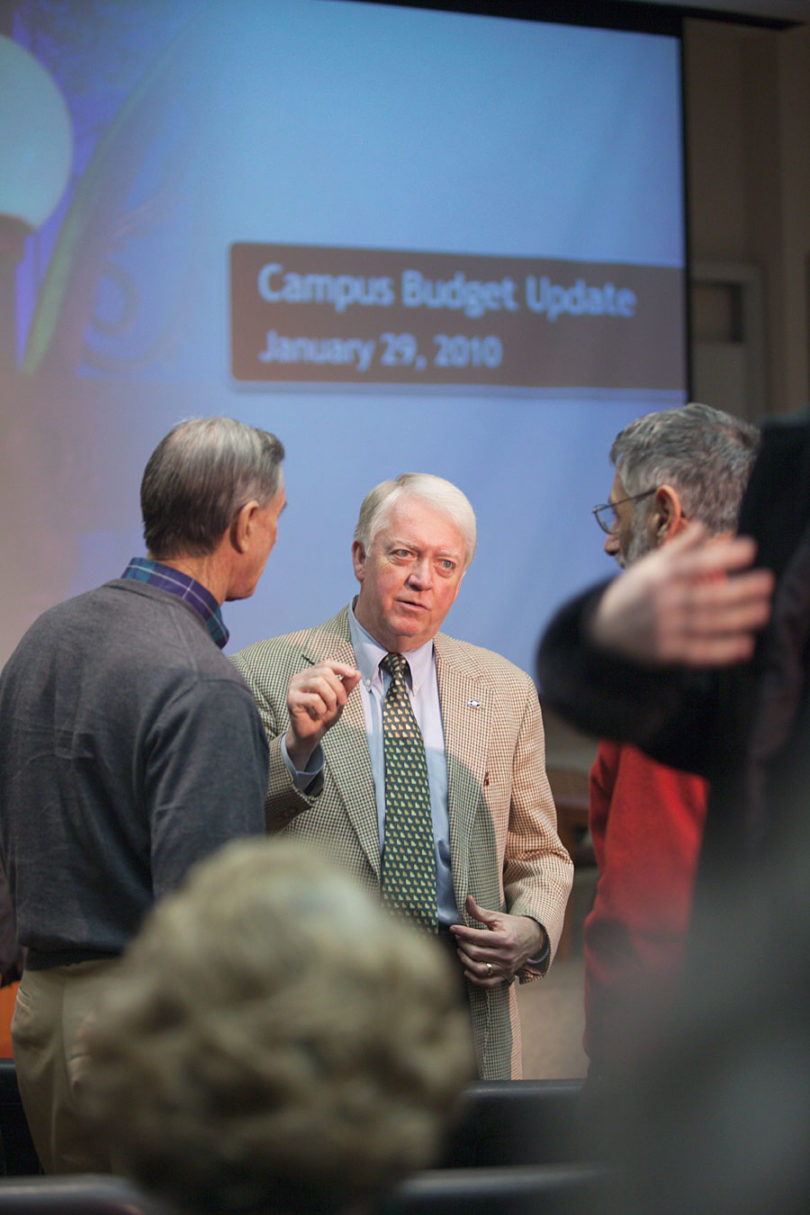 Despite shrinking funds from the state, most UGA workers should be safe from layoffs and furloughs in the current 2010 fiscal year if current budget conditions remain steady, UGA President Michael F. Adams said at an information session Jan. 29 on campus.

“I know that many of you are worried about layoffs, and in the fall, I was much more worried than I am today,” Adams said. “But because of good management both centrally and in the (campus) units, and some savings at the institutional level, the situation is not as dire as it once seemed.”

The good news applies to most UGA employees, but workers funded by the university’s “B” budget may face job losses or mandatory time off.

Most employees, particularly those on the Athens campus, however, are funded by the “A” budget.

“We cannot yet rule out some targeted and strategic layoffs. The deans and unit heads are fully engaged in evaluating all facets of their operations to determine if and when these difficult actions may be required,” Adams said. “Unfortunately, the ‘B’ units have been cut more severely. The level of the cuts is such that layoffs are, unfortunately, a real possibility in a few of these units.”

The reason for the cuts is the lessened state allotment of funds to UGA, which is slated to be down more than 10 percent this year, reducing the amount of money UGA receives by about $44 million.

Increased student fees, federal stimulus dollars and energy-saving measures have helped stem the loss, but the university will still be forced to operate on a deflated budget, according to Adams.

“We are being asked to teach more students, to prepare the next leadership class for this state, with less money from the state and fewer people to teach them. We have protected the teaching mission as well as we could, but there are very real concerns about the health of the research and service missions going forward,” he said. “The loss of full-time faculty affects all three mission areas. Instructional demand can be met in the short term with contract hires, but research and service cannot. Staff numbers are down as well. And I am particularly concerned about the loss of staff in those areas which directly serve students.”

Adams cautioned that these projections are based upon the budget prepared by Gov. Sonny Perdue’s office and have not been finalized by the state legislature. Until the budget is passed by both houses of the Georgia General Assembly and approved by the governor, changes are still possible.

“The governor’s budget is now in the House of Representatives and will work its way through the legislative process,” Adams said. “After the FY10 amended and FY11 budgets are final, the regents will act on the system budget and tuition rates in April, and we will have a much clearer picture of the UGA budget.”