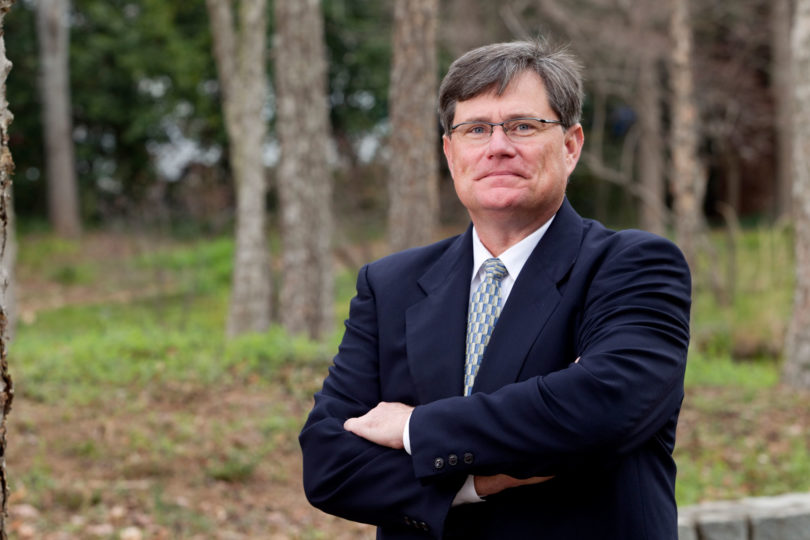 Gene Rhodes, the new director of the Savannah River Ecology Laboratory, was in China just one year ago, when the tsunami and nuclear reactor meltdown struck Fukushima, Japan.

“I remember that several of our group flew back through Japan—so we all followed the events very closely,” said Rhodes, who officially joined SREL in January. “The tsunami was an unbelievable disaster for the Japanese people and the damage to the reactor and subsequent radiation releases were obviously worse news on top of bad for Japan.”

Rhodes, who was a research scientist at SREL in the early 1990s and most recently assistant director of the National Wildlife Research Center in Fort Collins, Colo., said his initial thoughts also turned to SREL’s 60-year legacy of nuclear environmental remediation on the 300-square-mile Department of Energy Savannah River Site on the Georgia-South Carolina border.

“I asked myself how could the lessons learned from those radioecology studies assist the Japanese people in understanding the ramifications of the Fukushima disaster on their health, environmental quality and food supply,” Rhodes said. “SREL’s legacy is especially suited to addressing short- and long-term issues of nuclear contamination brought to the forefront at Fukushima.”

Since 1951, SREL scientists, with DOE support, have conducted studies on the transport and effects of radioactive isotopes on the environment of the SRS, where five nuclear reactors produced fuel for the Cold War arms race. Following nuclear détente with the Soviet Union, the SRS mission turned to remediation of the site, with SREL as its partner. SREL expertise also was tapped following the 1986 Chernobyl nuclear power plant accident in Ukraine.

On the one-year anniversary of Fukushima, Rhodes is steering SREL into a future tied to new national missions for the revitalized SRS—missions that go beyond remediation of the site. One is to help the nation meet national security objectives through disposition of spent nuclear fuels and production of tritium, a radioisotope needed to maintain the nation’s nuclear weapons capabilities. The new mission also includes energy independence objectives, such as development of small modular reactors that can be deployed where large-scale power generation is impractical, such as isolated sites, or semi-permanent military bases.

Rhodes said these new missions present unique opportunities for SREL and UGA. His goal, working in partnership with DOE, the Savannah River National Laboratory and the National Center for Radioecology, and with support from the Office of the Vice President for Research, is to reinforce SREL’s  position as the premier center for study of the fate and effects of radiation in the environment. In accomplishing this goal, Rhodes believes that SREL can positively influence how modern technologies and tools are brought to bear on nuclear safety and security, U.S. energy independence and the restoration of public confidence in the use of nuclear power production.

“No other universities in the U.S. have the critical mass of expertise in radioecology that SREL has,” Rhodes said. The SRS and Fukushima are, unfortunately, not the only sites where SREL expertise is germane. The same expertise is essential to restoring environmental quality at legacy nuclear sites all over the world.”

The new SRS missions mesh with research strengths on the UGA campus, such as genetics, proteomics and molecular techniques, according to Rhodes, who also has plans for an increased emphasis on graduate and undergraduate education related to radioecology. As the premier institution in this field, he said, “We don’t want to lose intellectual capital in that area.”