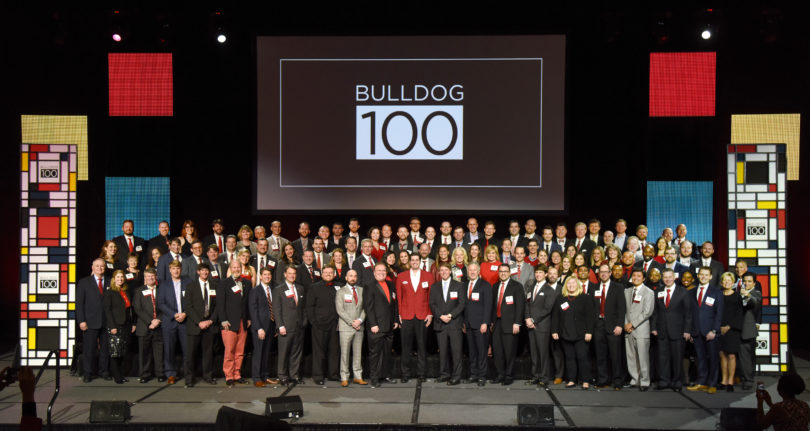 The UGA Alumni Association recognized the fastest-growing companies owned or operated by UGA alumni during the ninth annual Bulldog 100 Celebration on Jan. 27 at the Hyatt Regency in Atlanta

The University of Georgia Alumni Association recognized the fastest-growing companies owned or operated by UGA alumni during the ninth annual Bulldog 100 Celebration on Jan. 27 at the Hyatt Regency in Atlanta. 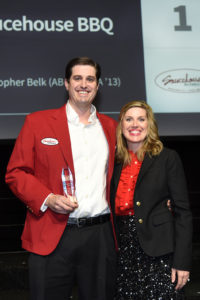 The 2018 fastest-growing business is Saucehouse BBQ, co-founded by Christopher Belk, who earned his bachelor’s degree in political science in 2005 and his MBA in 2013. Belk is from North Carolina and his co-founder is from Alabama. The pair wanted to highlight the regional differences in barbecue, so customers are offered a variety of sauces for their slow-smoked meats and homemade sides. The restaurant and catering company is based in Athens, and is open for breakfast, lunch and dinner.

“We look forward to the Bulldog 100 Celebration each year because it provides us with an opportunity to deepen our connections with passionate alumni,” said Meredith Gurley Johnson, executive director of alumni relations at UGA. “The feeling in the air as we count down the businesses from 100 to 1 is incomparable. This is such an honor for the honorees because they have poured themselves into their entrepreneurial ventures. We are proud to celebrate their achievements.”

The Atlanta office of Warren Averett CPAs and Advisors partnered with the UGA Alumni Association to review nominated businesses’ financial records to determine the ranked list. Nominations were accepted between February and May 2017. Approximately 500 nominations were received for the 2018 Bulldog 100. Each organization must have been in business since 2013, experienced revenues in excess of $100,000 for the calendar year 2014, and be owned or operated by a former UGA student who owns at least 50 percent of the company or is the CEO, president or managing partner. 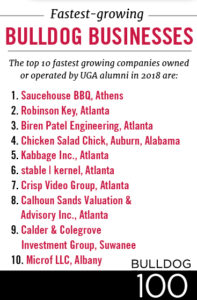 This year’s list featured 101 businesses, with a tie for No. 45. The class includes companies in a variety of industries, including pharmaceuticals, law, IT, consulting, retail and pest control. Companies as far as California and New York are on the list.

This year’s keynote speaker was Amy Smilovic, founder and creative director of Tibi, an international women’s clothing and lifestyle brand. Tibi has been featured everywhere from New York Times fashion photographer, the late Bill Cunningham’s “On the Street” column, to Vogue France. Smilovic graduated from UGA in 1989.

During the event, the UGA Alumni Association presented the inaugural Michael J. Bryan Award to 1983 graduate Mark Mahoney, the owner of Jackrabbit Technologies Inc. in Huntersville, North Carolina. It also unveiled the Michael J. Bryan Scholarship Fund, which will support students who have financial need and demonstrate an entrepreneurial spirit.

Bryan, the co-founder and managing partner of Vino Venue and Atlanta Wine School in Dunwoody, Georgia, passed away in 2017 after a long battle with cancer. His business was recognized during the 2017 Bulldog 100 Celebration as the only company to make the list since the program’s inception in 2010. The award recognizes entrepreneurial spirit and sustained business growth.

“The UGA Alumni Association is excited to honor our graduates who are founding and leading these prosperous enterprises,” said Bonney Shuman, president of the UGA Alumni Association. “It is even more inspiring to see the impact that these businesses have on our students. Many of our Bulldog 100 honorees provide students with scholarships and internships that prepare them for success after graduation. It’s invaluable for students to network with these accomplished business leaders, and for the honorees to remain connected to campus by investing in student success.”

For more information about the Michael J. Bryan Scholarship Fund, to view the complete list of 2018 Bulldog 100 businesses, or nominate a business for the 2019 Bulldog 100, see the website. Nominations are being accepted through May 31, 2018.