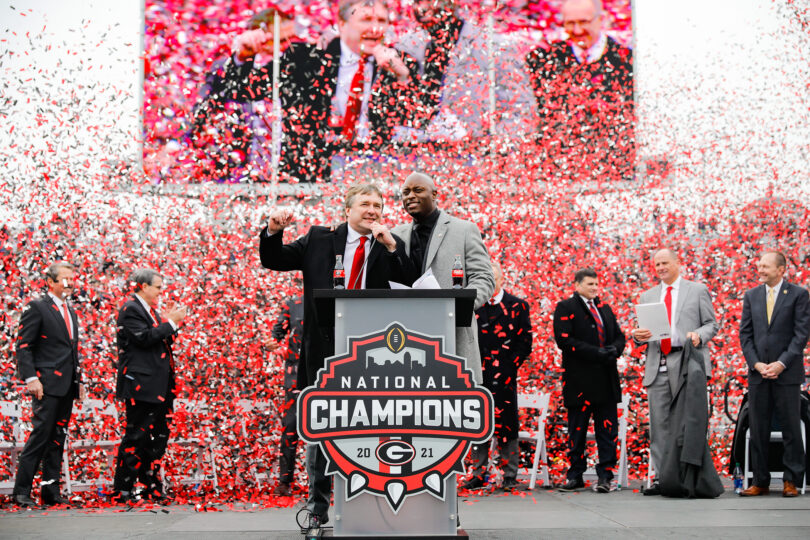 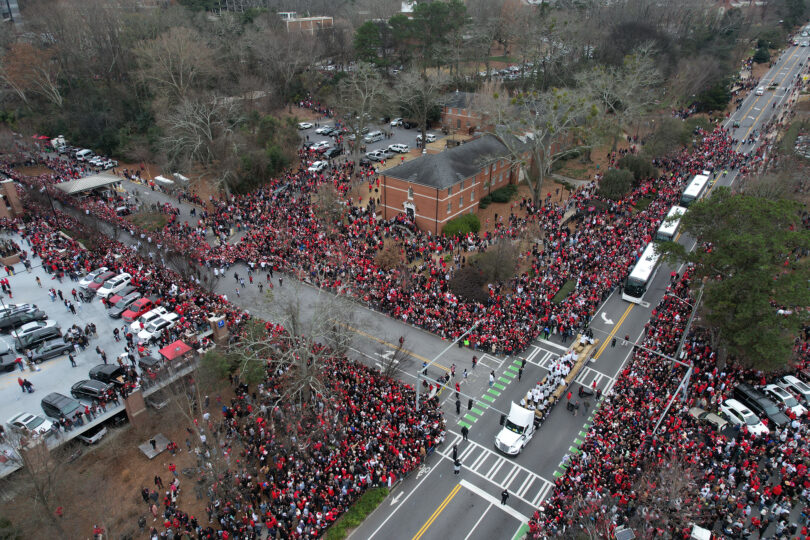 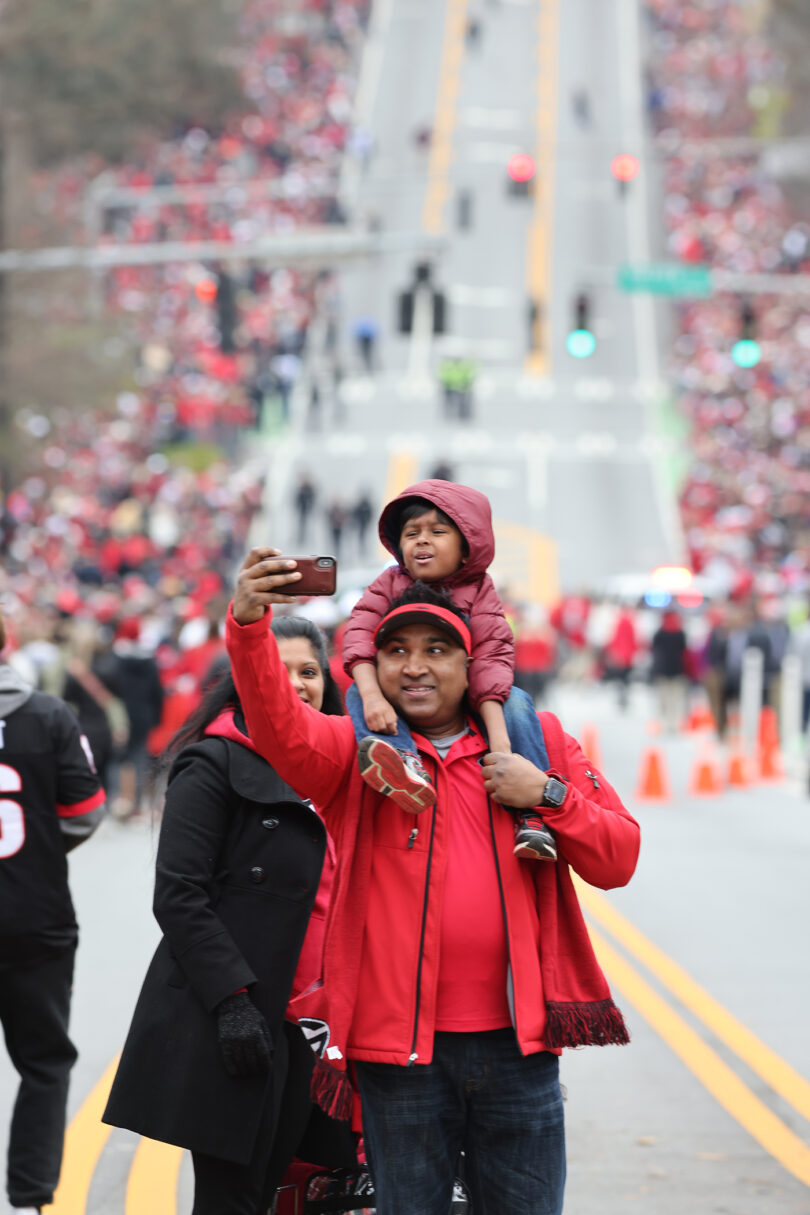 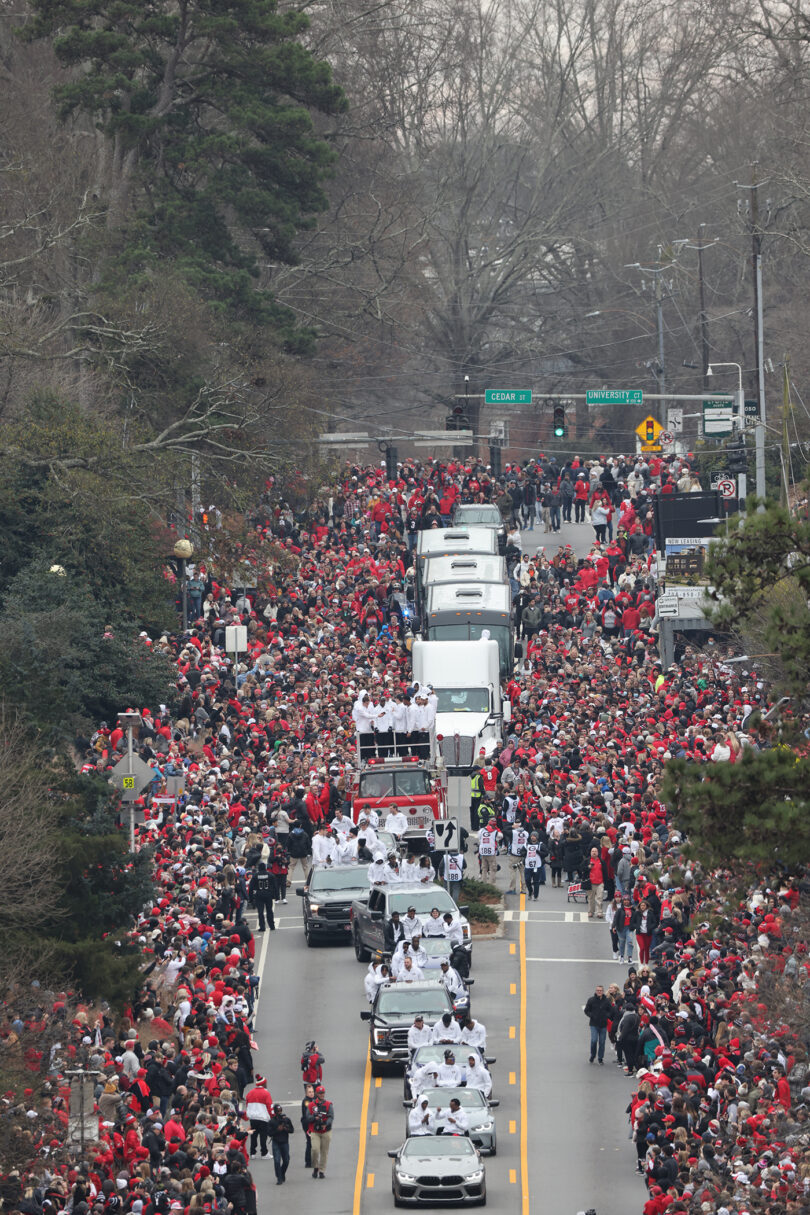 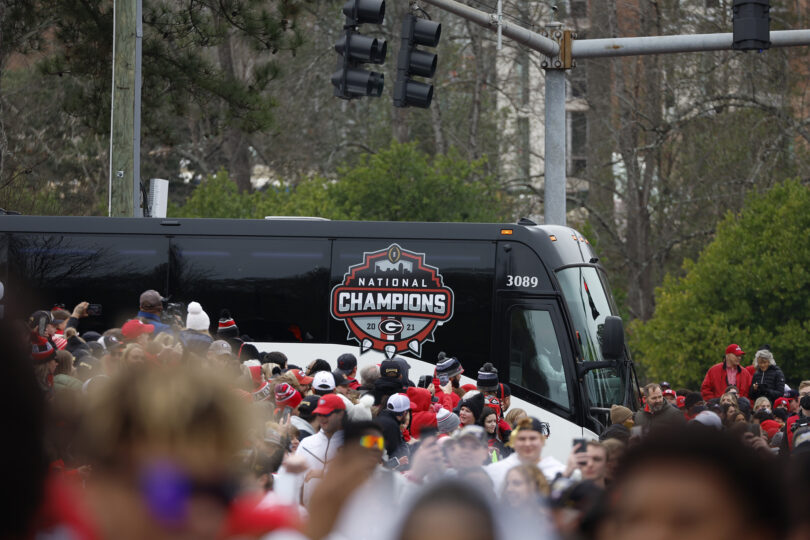 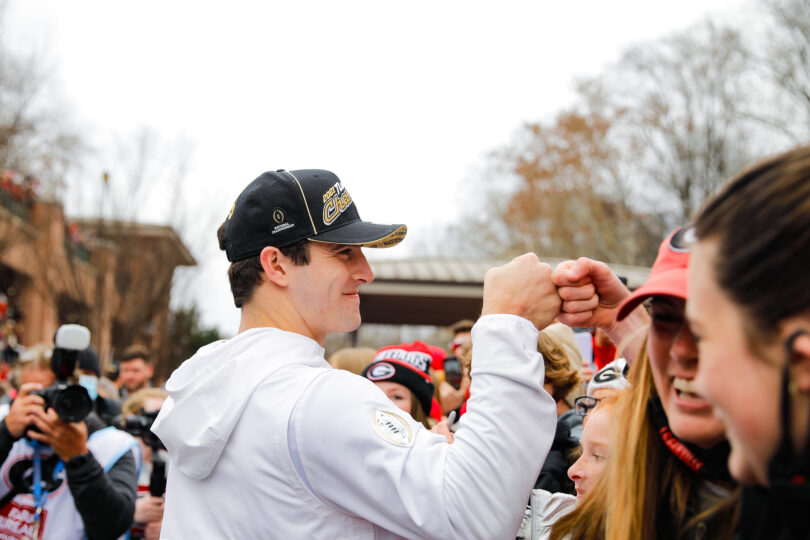 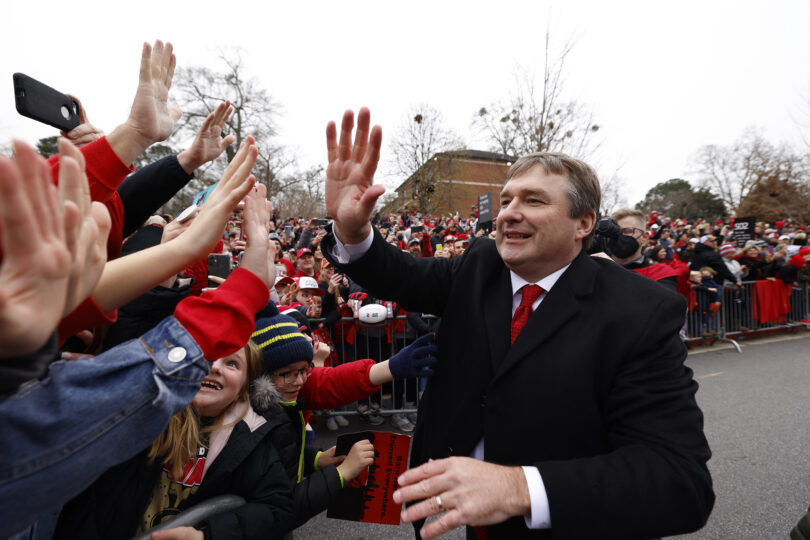 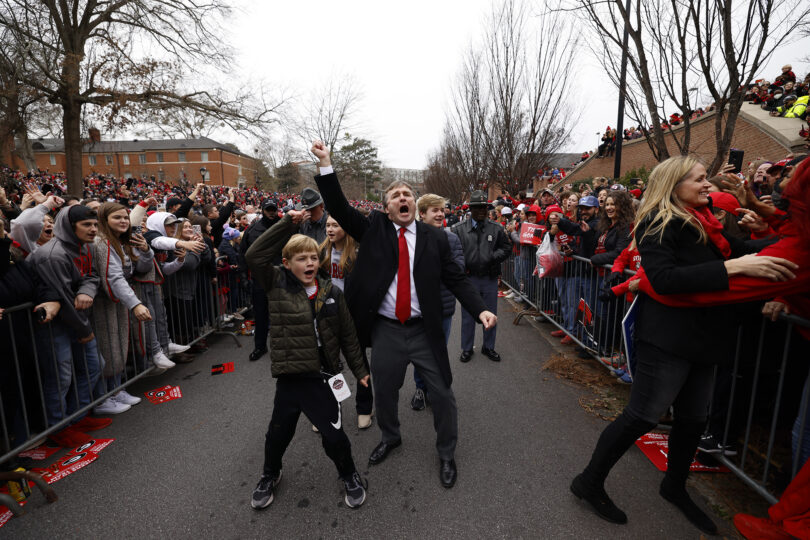 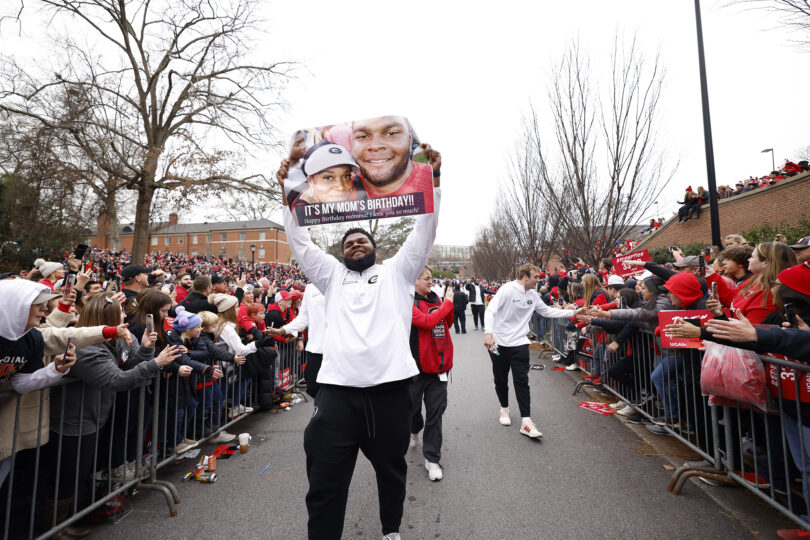 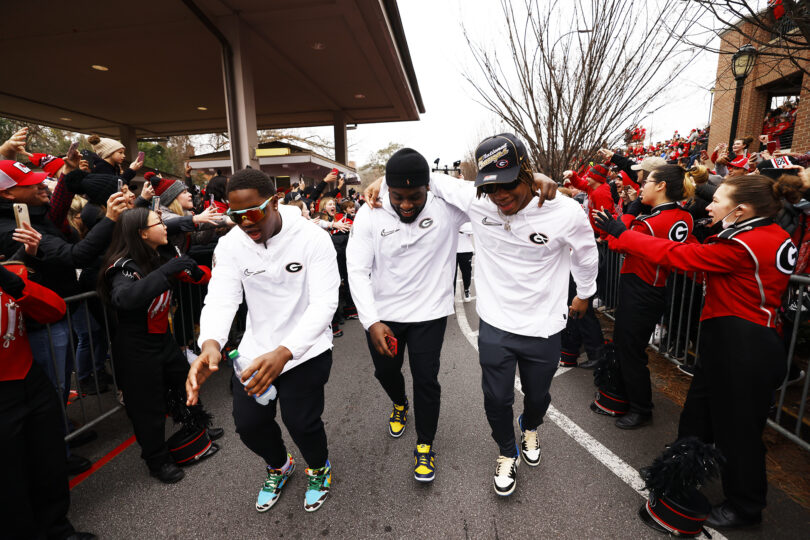 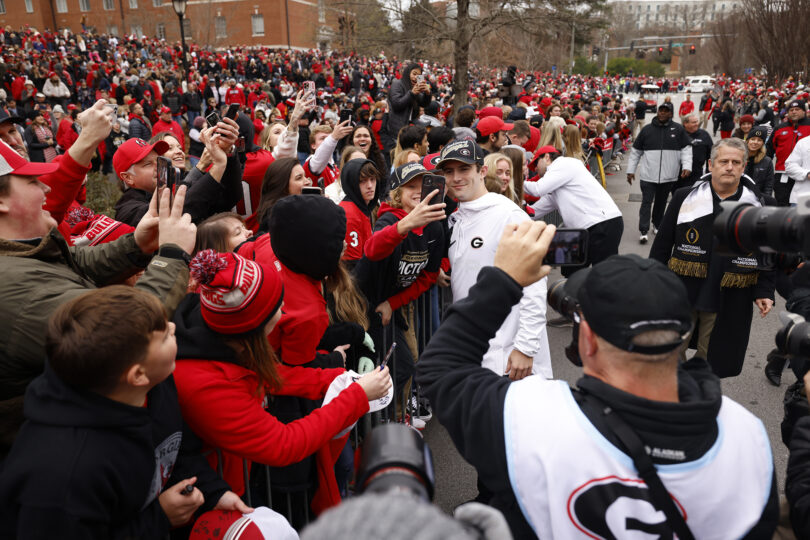 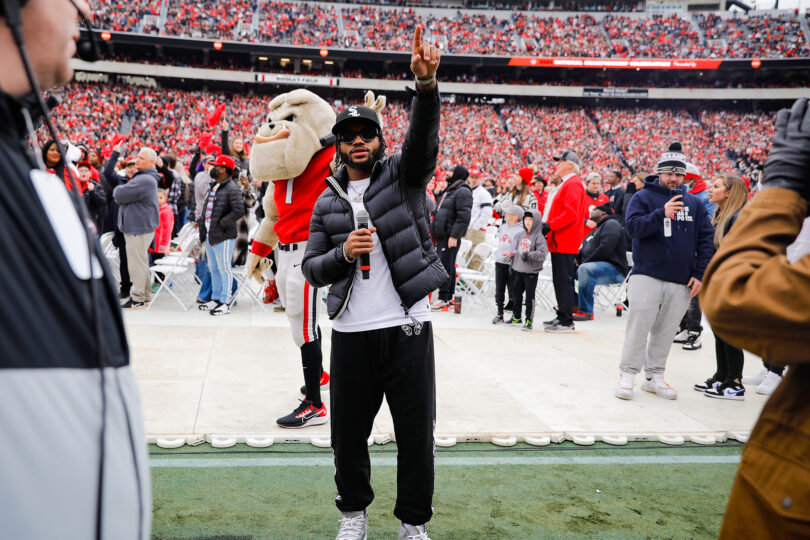 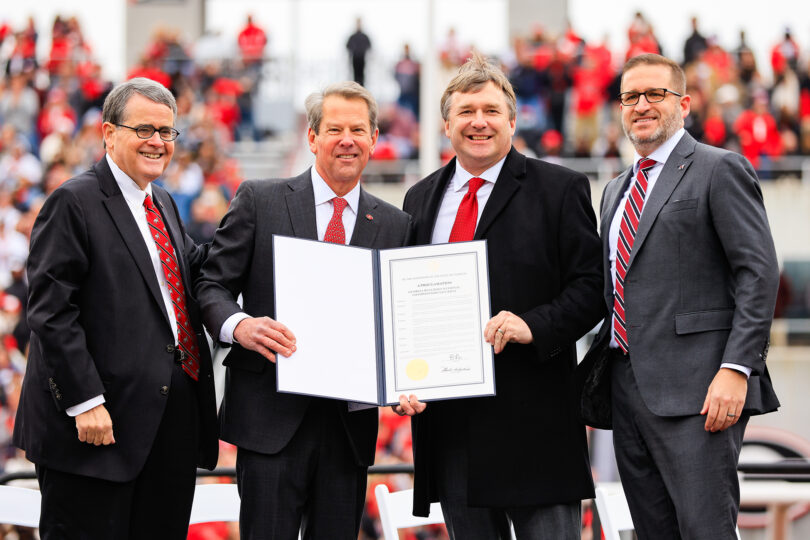 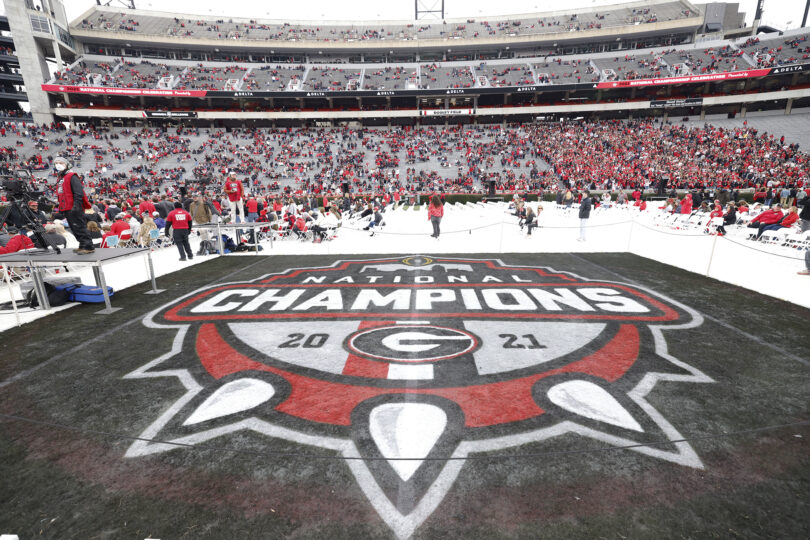 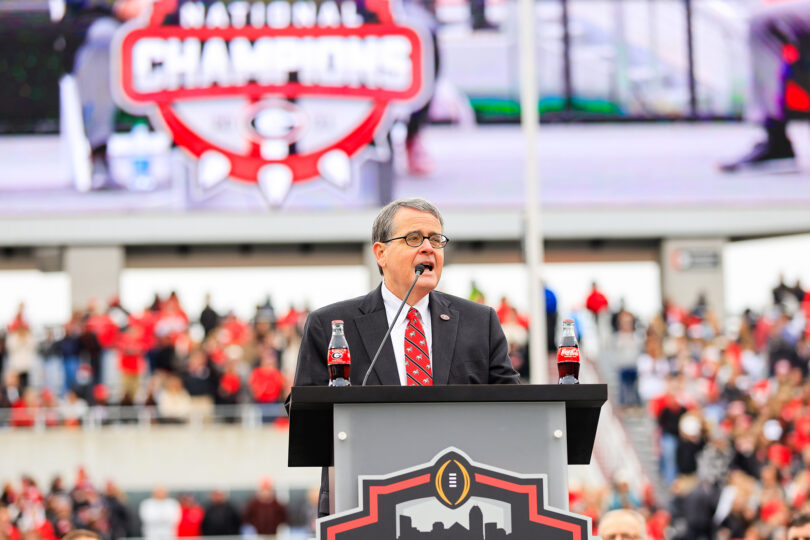 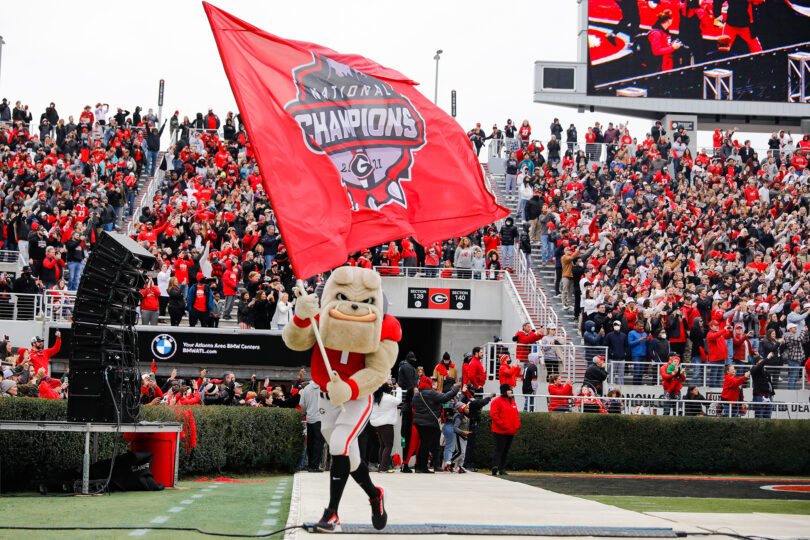 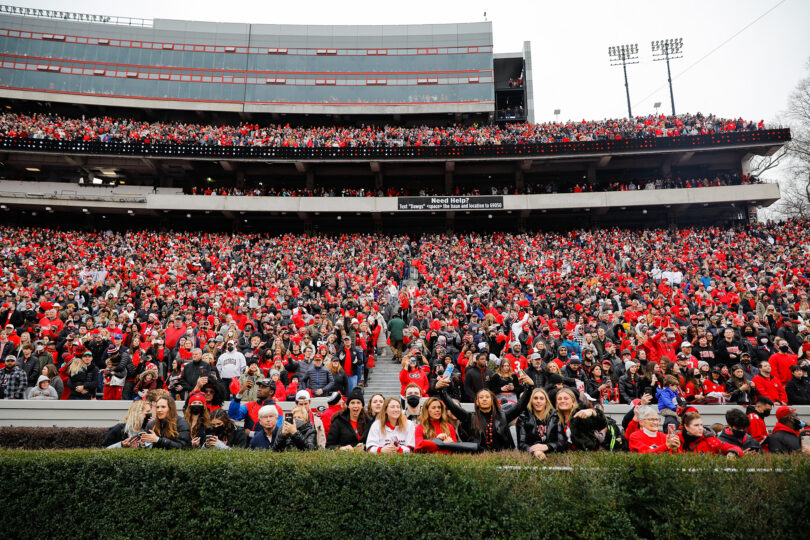 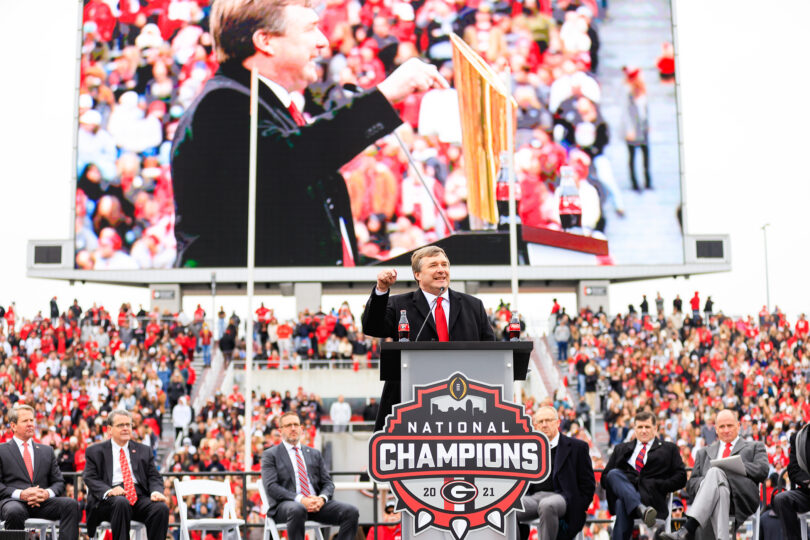 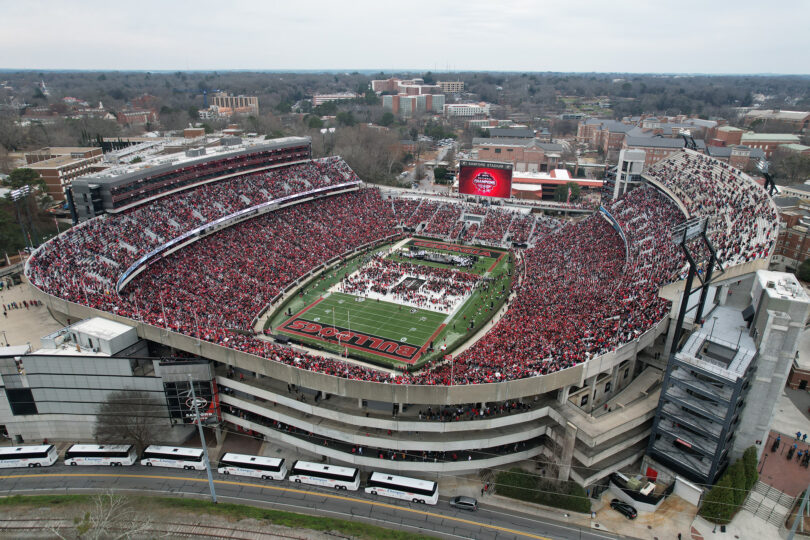 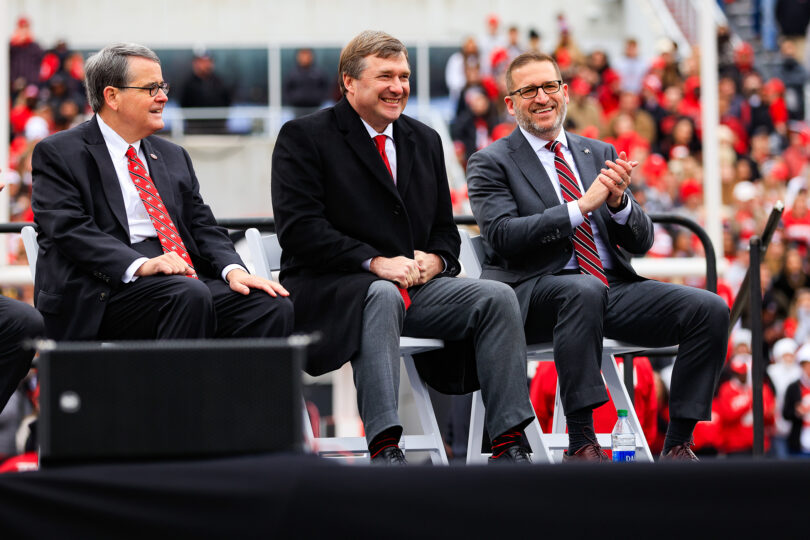 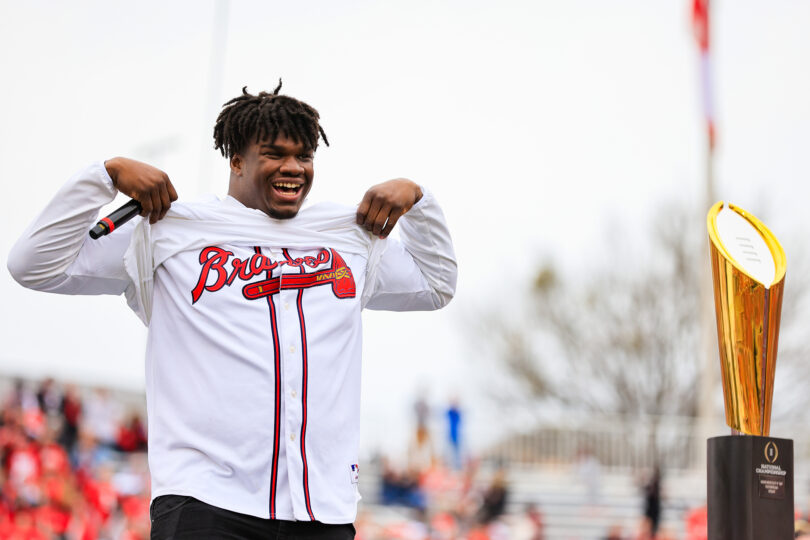 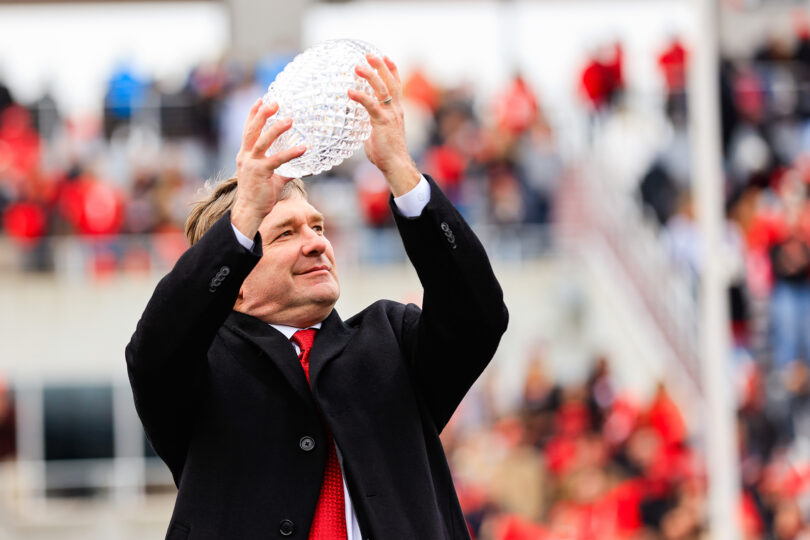 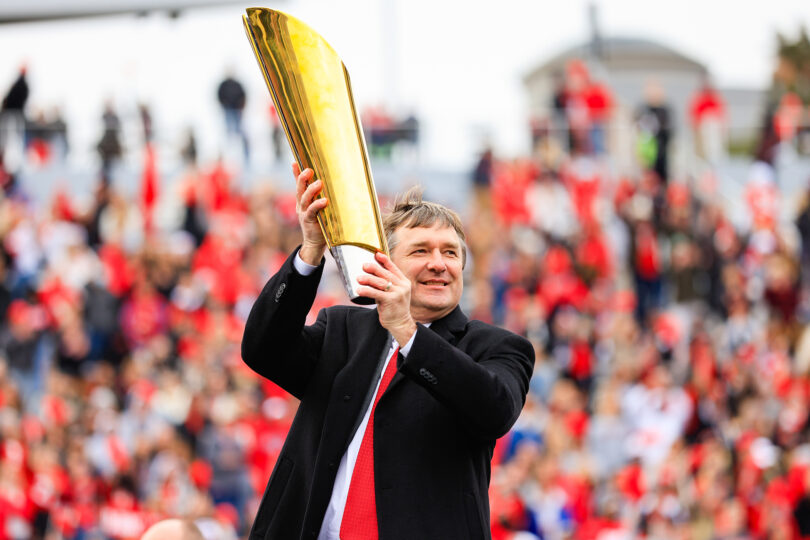 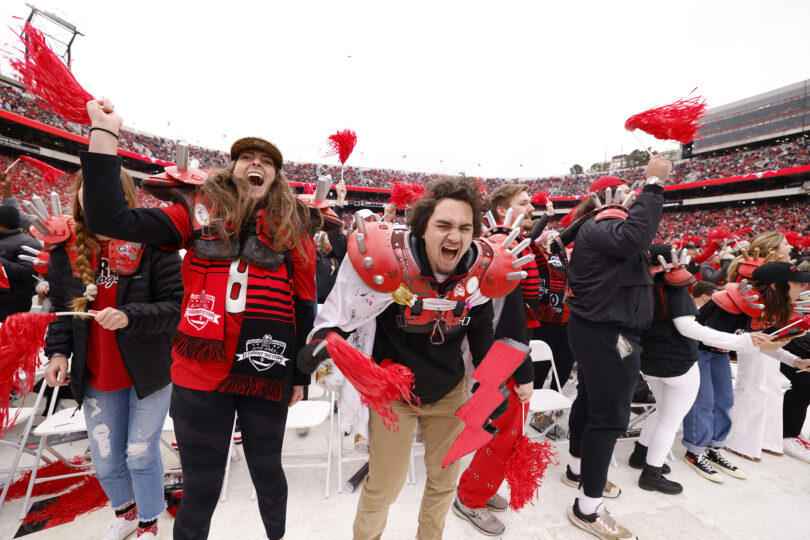 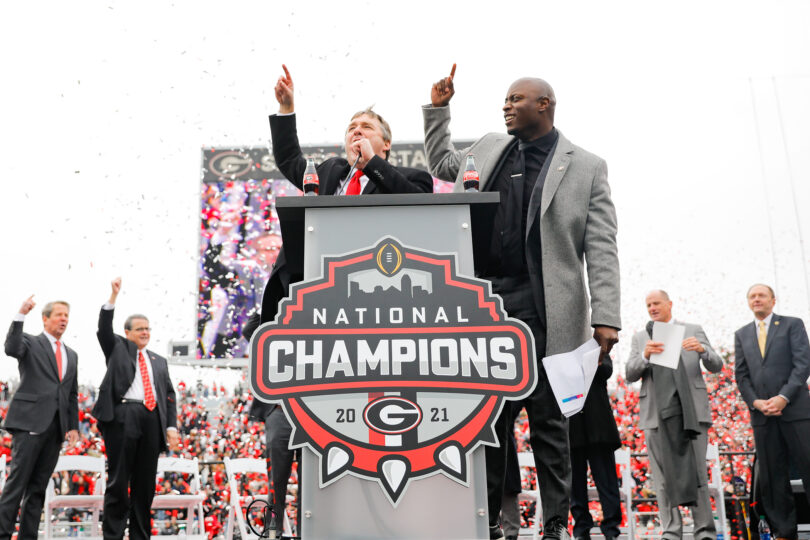 The Georgia football season began Sept. 4, in Charlotte, N.C., where a Christopher Smith interception return for a touchdown was the difference in the Bulldogs’ 10-3 win over Clemson in the Duke’s Mayo Classic.

The Georgia football season ended last Monday night in Indianapolis, where a Kelee Ringo interception return for a touchdown sealed a 33-18 win over Alabama in the College Football Playoff National Championship Game.

What has followed has been a weeklong celebration across the state as the Bulldogs and their devoted fans, tens of thousands of whom were there in Lucas Oil Stadium on Monday, exulted in Georgia’s first national championship since 1980.

That celebration reached its peak on Saturday afternoon in Athens, when the university, the city, the team and the fans from near and far all came together for a party, first in the streets and then in the place these Bulldogs call home.

It’s always special to head to Sanford Stadium on a Saturday to see the Bulldogs, but this Saturday was different. We weren’t there to see the men in red and black run around on Dooley Field. No, we were there to stand and cheer and salute these Bulldogs for their remarkable accomplishments this season.

Before coach Kirby Smart could get started with his remarks, he was greeted with chants of “Kirby! Kirby! Kirby!” He then told the 92,000-plus inside Sanford Stadium for Georgia’s championship celebration that so much of what the Bulldogs achieved this season started about a year ago in the stadium when the players were there working out at 6 a.m.

Smart and the team arrived at the stadium in style, slowly making their way down Lumpkin Street during a victory parade. The parade consisted of about two-dozen vehicles, from sporty convertibles to pickup trucks to some huge 18-wheelers with hay bales on the back. From start to finish, crowds three-, four- and five-people deep lined the road.

Smart always goes out of his way to thank Georgia’s diehard fans for their love and support. In some of his first TV comments after winning Monday, Smart waved his left arm at the huge crowd in Indianapolis and said, “Look at these fans and the people that traveled.”

He again saw that love and felt it returned back to him and his program Saturday. The crew of Apollo 11 didn’t receive a warmer welcome after returning home from the moon.

“You guys have been tremendous,” he told the fans. “You travel wherever we go and you take over stadiums,”

With thousands of fans lining the sidewalks in between Butts-Mehre Heritage Hall, at the corner of Pinecrest Drive and Lumpkin, and the turnoff for the Tate Center parking lot, and then continuing on to the Dawg Walk by the stadium, these Bulldogs over the nearly mile-long route received a hero’s welcome.

Around the stadium, Stegeman Coliseum, and other sections of campus, some fans were tailgating like it was a Saturday in the fall. Red and black were most definitely the colors of the day. Georgia’s players were in their white Nike College Football Playoff windbreakers.

Once the team got into the stadium, the formal celebration began. Former star running back D’Andre Swift had the honor of calling the Dawgs before the festivities really began. On and around the stage on Dooley Field were the players, the coaches, UGA President Jere W. Morehead, J. Reid Parker Director of Athletics Josh Brooks, Gov. Brian Kemp and SEC Commissioner Greg Sankey, and more.

“As someone who was in New Orleans 41 years ago,” Kemp said of the 1980 team’s win over Notre Dame in the Sugar Bowl to win the national championship, “this has been a long time coming.” Kemp went on to proclaim that this day, Saturday, Jan. 15, 2022, was “Georgia Bulldog National Championship Day.”

Just look at the numbers

The numbers don’t always tell the story of a season, but they can tell a lot. And before we get too far away from that final whistle in Indy, let’s take a moment to appreciate some of those numbers:

As Smart said as he wound up his remarks, “A new standard for excellence has been set.”

Saturday’s parade and celebration, with 92,000 in the stands, a few thousand more on the field, and who knows how many thousands more outside the stadium, made for one of the largest events in the history of Athens — maybe the largest. The only thing perhaps to challenge it was the 1998 Widespread Panic concert downtown, when at least 100,000 turned out for the greatest album release party this music-loving city has ever seen.

We love our music in this spectacular college town, and we love our Bulldogs. What this team did this season will be talked about for years to come. Saturday’s celebration will as well, as the legend of both grow and grow with time.

The festivities ended with the seniors from the 1980 team raising the flag for the 2021 national championship. It was a moment to celebrate, a day to savor and cherish. Now, how about we do it again next year?