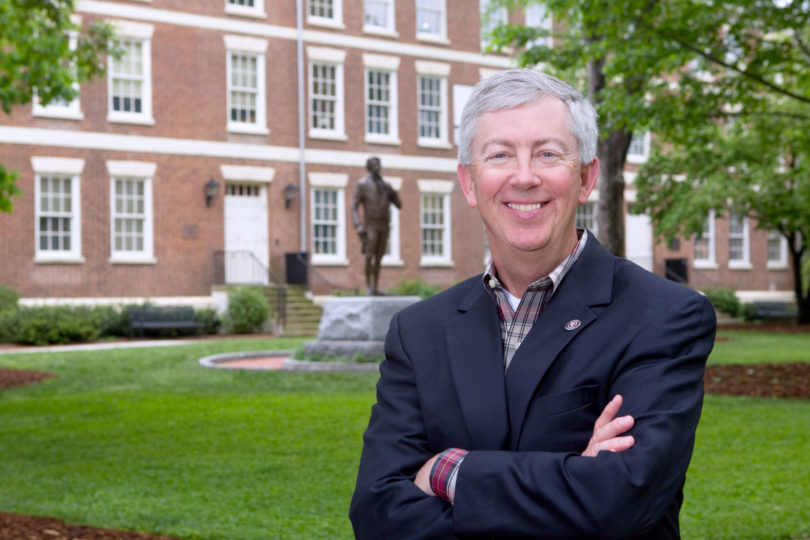 After working for almost 35 years, Tim Burgess no longer will have to wake up and head to work. Instead, the senior vice president for finance and administration will be taking it a bit slower after he steps down June 30.

“There’s only been one day in those 35 years that I haven’t been on somebody’s payroll,” Burgess said. “I’m ready for the break.”

Burgess has spent more than seven years at the university, which is his alma mater. He first started at UGA in 1999 as the associate vice president for finance and administration. In 2000, Burgess left UGA to work as the chief financial officer for the newly formed Georgia Technology Authority. He then became the first commissioner for the Department of Motor Vehicle Safety. After that, he became the commissioner of the Department of Community Health. Burgess returned to UGA in December 2005 as an associate vice president and the budget director. UGA President Michael F. Adams appointed him the senior vice president for finance and administration in 2006.

“The ability to come back here to work and, in some small way, give back to a place that launched my career has been very rewarding,” Burgess said.

Burgess said he knew that when he accepted the position as senior vice president that it probably would be his last “big full-time job.”

“Even at that point I knew the timing might work out this way,” he said. “And now with Dr. Adams stepping down and (President-elect) Jere Morehead coming in, it’s a natural transition point for the university and for me.”
Burgess, who will be 58 in July, said he is ready to focus on the personal side of his life, including his 9-year-old son.

“I think about the last five years of my son’s life, and I realize I’ve missed a part of that because this job requires so much of your time,” Burgess said. “So now, I would like to invest more time in his life.”

Instead of calling it retirement, Burgess said he’s taking his version of a sabbatical, which will help him reassess what he wants to reinvest his time in.

Burgess said he plans to reconnect with old friends and colleagues during his break. He also will take a few trips and do more hunting, golfing, fishing and reading for pleasure.

With budget cuts and challenging fiscal times, Burgess said he’s proud of the way he used dwindling resources to “do the most we could with what we had and try to do it in a way that minimized the impact to the students.”

He also takes pride in the university’s development of its Health Sciences Campus, a project that was in the very early stages when he came to UGA.

“That’s been a consuming activity for all the people who work in my division, and it’s been a very intensive focus of our division,” he said. “Not only has that been a huge effort, but I think we really don’t yet understand or appreciate the full significance that the campus will have on the university and this community. It will change the face of the university forever in positive ways that we can’t really envision yet.”