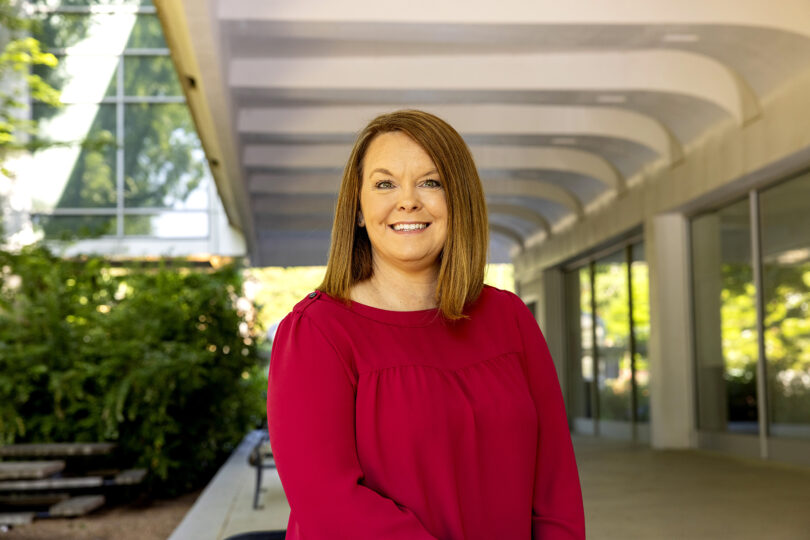 Jessica Hart is the business affairs manager in the College of Pharmacy. (Photo by Dorothy Kozlowski/UGA)

Before Jessica Hart embarked on her business affairs journey at the University of Georgia, she was actually working in a completely different field—real estate.

That all changed when housing prices peaked at the beginning of 2006, and quickly declined later that year and into 2007.

That market crash was a catalyst for Hart, who pivoted from a career in real estate to a career in higher education. Although the two industries have their differences, both fields required Hart’s skills as an effective communicator and her business-oriented mind.

It was a positive but uprooting change, she said.

“I learned to embrace the change in my career,” Hart said. “And I survived by taking training, taking part in leadership development programs, forming relationship with co-workers and taking advantage of opportunities to learn new skills.”

Today, Hart is the business affairs manager for the College of Pharmacy.

Hart grew up in Madison County, Georgia, where she still lives. She began her career at UGA in 2007 in the Mary Frances Early College of Education as an accountant in the learning and performance support lab. The transition from a more corporate setting to the world of higher education was a welcome change.

“It’s allowed for a level playing field in which we can be more strategic in our work and more responsive to people,” she said.

Hart said that she appreciates her team in the College of Pharmacy. She and others in the college refer to their team members as the “Pharm Dawg family.”

“The awesome team that I work with in the business office is what I enjoy the most every day,” she said.

During the past 14 years, Hart said she’s witnessed a few critical changes with regard to the university and her own role.

For example, the university’s switch to PeopleSoft—a collection of software applications that offer human resource services to organizations—has been a significant change in the way the business of the college operates. In fact, Hart served as the “Change Champion” for the college during the PeopleSoft conversion.

Perhaps the most significant event Hart has experienced since coming to UGA has been the coronavirus pandemic and the way in which it altered how universities function.

“The pandemic definitely affected the role of the business office,” she said. “We had to learn how to work with our colleagues remotely while continuing to support the mission of the college and the university.  It was a challenge; however, I am proud that my staff met and exceeded expectations during this unprecedented time.”

When she’s not taking care of business in the College of Pharmacy, Hart enjoys spending time with her family.

“We like to camp. We’re very much lake people and spend a lot of time on the lake,” she said.

In the years to come, Hart hopes she’s in the same position she’s in now.

“Hopefully, I’ll still be working in the College of Pharmacy. I just feel like this is my home and hopefully where I’ll retire,” she said.

Still, Hart has no problem stepping up when she needs to.

“Since I came to pharmacy, I’ve had to be the interim director of finance administration two times due to management changes,” she said. “I have a really strong work ethic, and I’ve tried to do my best and lead by example.”

For now, Hart continues to leverage and build on the same skills she honed during her real estate days—effective communication, attention to detail and problem solving.