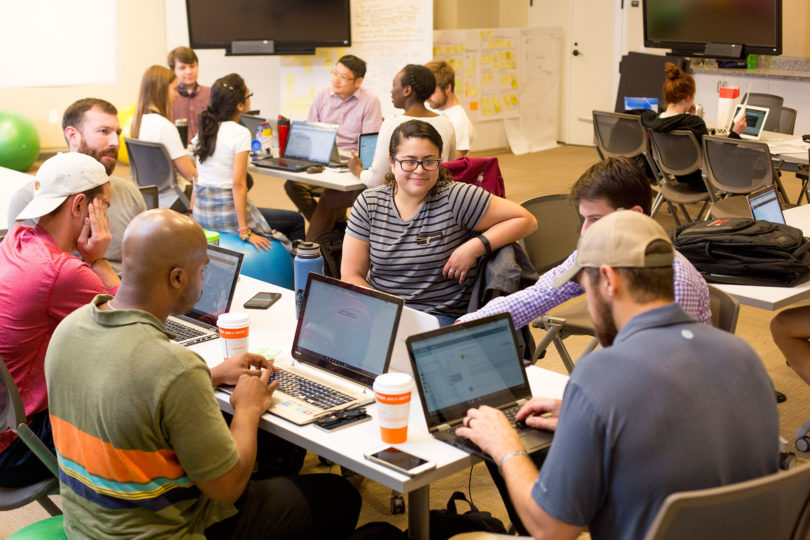 Some key ingredients to business success are preparation and collaboration. So, it makes sense to have a business learning environment that facilitates teamwork.

That’s exactly what master’s students in the Terry College of Business are finding in Correll Hall, which opened in 2015 as Phase I of the Business Learning Community. The building is named for A.D. “Pete” Correll, chairman emeritus of Georgia-Pacific and a Terry College alumnus, and his wife, Ada Lee Correll, a graduate of the UGA College of Education.

Correll Hall, which was supported by $35 million in private funds, features dozens of project team rooms and common areas where students can work and interact between classes. The building is equipped with conference rooms and event spaces for alumni networking and interview rooms where students can meet potential employers. That’s in addition to state-of-the-art classrooms that promote active learning, group activities and creative thinking.

In other words, Correll Hall offers an environment that maximizes the business student experience, helping them learn, network and leave UGA equipped to become leaders in their careers.

Over spring break, Mike Nakayama, a second-year MBA student, met with classmates Rahul Potluri and Joshua Newby in one of the project team rooms for a class assignment. The rooms are outfitted with a few chairs, a table and a computer, all the ingredients needed for small group collaboration. And these rooms are reserved exclusively for graduate business students and allow Nakayama and his classmates to do their work in the same building in which they take classes.

“They definitely facilitate the team-learning aspect of our program,” said Nakayama.

That’s necessary as nearly every full-time MBA course at Terry College features a team project aimed at preparing students for collaboration in the business world. Nakayama said he couldn’t imagine trying to work on group projects without these rooms designated for Terry College students in master’s programs.

One of the unsung elements of the new building has been its ability to create an environment that promotes community.

Master’s students have nearly everything they need in Correll Hall so they don’t have to scatter across campus or go to their homes to study and work on projects.

“Because they’re always there, there’s a community,” said Jason Colquitt, the William Harry Willson Distinguished Chair, who was involved in the building’s classroom design. “That’s what you want in a business school. It makes you feel like you’re not alone in this, while helping you broaden your network.”

With conference and interview rooms and event spaces, Correll Hall hosts alumni and employer programs that enable students to network and transition from college to a new career. And instructional spaces are designed for optimal leadership development.

The bottom floor of Correll houses the business innovation lab, used by entrepreneurship classes and other courses that emphasize creativity and design thinking. The lab, which resembles the kind of creative space one might find at a tech startup in Silicon Valley, has movable tables and chairs, whiteboards and six big-screen monitors attached to tracks in the ceilings. The monitors can be moved around for presentations or group work.

Jodi Barnes, a lecturer in the Institute for Leadership Advancement, relies on her classrooms’ designed flexibility to incorporate media and active-learning exercises to prepare future leaders.

“When it comes to softer skills, it’s about setting up simulations and workplace scenarios where students can feel what it’s like to be in a difficult management situation and to react in real time,” she said.