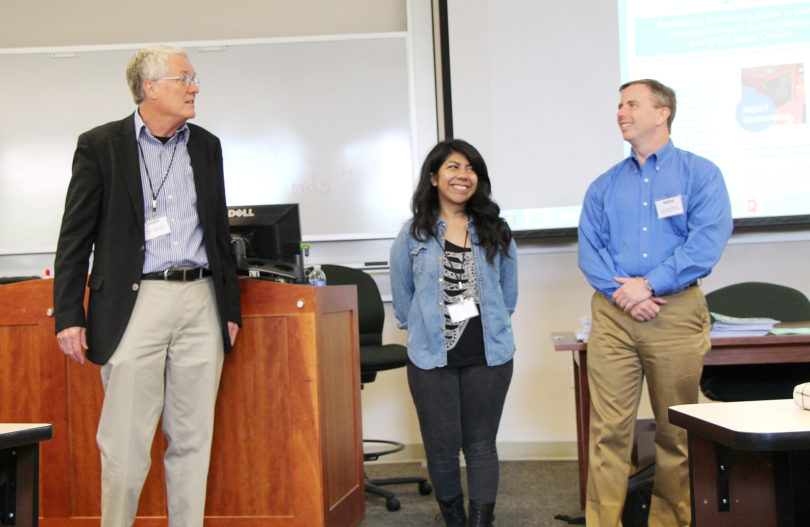 Athens, Ga. – The Daily Titan at California State University, Fullerton is the 2013-14 winner of the University of Georgia’s Betty Gage Holland Award for excellence in college journalism. The award was announced July 29 at the 19th annual Management Seminar for College News Editors, a week-long workshop led by educators and industry professionals and held at UGA.

The Holland Award recognizes campus journalists and their publications for distinguished service to honor and protect the integrity of public dialogue on America’s college campuses. The award is presented by the Cox Institute for Journalism Innovation, Management and Leadership, which is part of the Grady College of Journalism and Mass Communication, and the Student Press Law Center. It is named for Betty Gage Holland, a long-time friend of journalism at the Grady College.

The winning entry from the Daily Titan is a series of investigative reports called “The Food Report” about the requirement at Cal State Fullerton that all students purchase an on-campus meal plan and how California state law allows an exemption from this program-a little-known fact among the student body and administration. The series features articles about inspection ratings, suspected illness reports as a result of eating at on-campus establishments and poor maintenance at concession stands and vending machines. Many of the features also include videos as part of the multimedia report.

Bonnie Stewart, adviser for the Daily Titan, nominated the series due to the extensive research used to uncover the issues, including using open records to research the inspections and talking with Cal State personnel, many of whom were not always cooperative.

The judges cited the Daily Titan’s discovery of an obscure state consumer-protection law and holding the college accountable through the written features as reasons for the recognition.

“The deep pool of submissions this year demonstrate that university students are producing excellent journalism of consequence,” said Kent Middleton, director of the Cox Institute. “It’s journalism that the Cox Institute and Student Press Law Center are proud to honor with the Betty Gage Holland Award.

This is the ninth year for the annual award, but the first year that Cox Institute partnered with SPLC to promote, judge and administer the award.

“The SPLC is especially proud to be associated with the Holland award because it emphasizes the enterprising use of public records to tell compelling stories,” said Frank LoMonte, executive director of the SPLC. “Our attorneys assist many hundreds of students every year in obtaining public records, at times against fierce obstruction from their colleges, and it’s exciting to see the innovative uses that students are finding for the records they dig up.”

“Personally, I am honored that the award is being presented at the Management Seminar for College News Editors, and that Cal State Fullerton’s attending editor Nereida Moreno was a member of the award-winning team of reporters,” added Cecil Bentley, assistant director of the Cox Institute.

LoMonte summarized the importance of the Holland Award. “Student media gets a bad rap for being full of entertainment news and fluff, but the Holland award shows us that fundamentally sound watchdog journalism is alive and well on campuses across America,” she said.

The James M. Cox Jr. Institute for Journalism Innovation, Management and Leadership, which sponsors the Management Seminar for College News Editors, prepares students and professionals for leadership roles in the news media. It is named for the late James M. Cox Jr., who headed Cox Enterprises and Cox Broadcasting Corporation from 1957 until 1974. For more information, see http://grady.uga.edu/coxinstitute/.

The Student Press Law Center, an Arlington, Virginia-based nonprofit, provides legal assistance and advocacy in support of student journalists nationwide seeking access to information from schools and colleges. The center provides free legal training and educational materials for student journalists and their teachers on a wide variety of legal topics. For more information, see http://www.splc.org/.