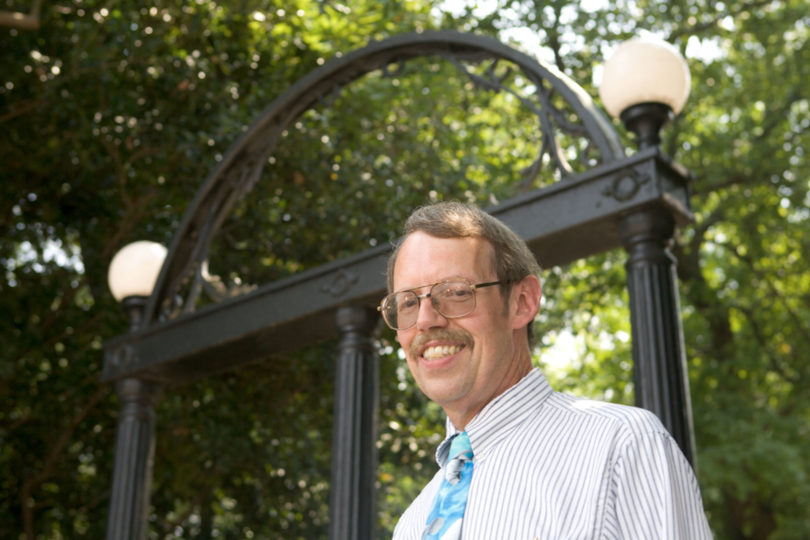 After writing for UGA for 37 years

LARRY B. DENDY
Assistant to the Associate Vice President for Public Affairs

JOB DESCRIPTION: “I do a lot of writing-news releases, reports, policy papers-for the external affairs division and the public affairs office. I also do some writing-scripts for commencements and Honors Day-for the President’s Office.

“As the liaison with institutional research, I help shepherd through a lot of the surveys that we receive from publications such as U.S. News & World Report. I also maintain and update the ‘Points of Pride’ and ‘UGA By the Numbers,’ two general information pieces about UGA that our office makes available to the public.”

“I also answer a lot of questions. Because I’ve been here a long time, I know where to go to find information that other people may not be aware of regarding the university and institutional matters.”

A TYPICAL DAY: “Because I cover and report on administrative activities, my writing assignments are primarily about appointments, institutional policy matters, that sort of thing.

“So my day might start by working on a couple of news releases. Or the associate vice president may have a question that’s arisen that he needs some background information on, so I may spend some time putting together some facts about an issue or question.

“Part of my responsibility is community relations in a very broad sense so I’m involved in several community groups-the Keep Athens-Clarke County Beautiful board, the Convention and Visitor’s Bureau’s advisory board-as a representative of the university. As a result, I may spend some of my workday attending meetings. I also represent the university unofficially on several other community groups.”

OTHER WORK EXPERIENCE: “After graduating from Grady College here in 1965, I went directly into the Peace Corps with my wife, Gail. We served in India for two years. After returning to the U.S., I worked as a newspaper reporter in Winston-Salem, N.C., and then moved to Tifton where I was the city editor of the newspaper there.

I came to work at UGA in 1972 as a science writer and editor in this office. I was news service director from 1973 to 1989 before assuming my current position.”

MOST REWARDING PART OF MY JOB: “Being a source of assistance always makes me feel good. I’m a fairly decent writer so I enjoy being able to write a crisp, succinct news story. And the whole idea that what I do helps promote education-something worthwhile, beneficial, even noble-is very ­rewarding to me.”

“Last month, I was honored to be chosen the first recipient of the Employee of the Year Award for the external affairs division.

“To me, the award represents an expression from my colleagues of their respect for me and their recognition that what I do is useful.

“I’m very humbled that people think well of me but I think the award also is an acknowledgment of my commitment to the university and the fact that I’ve been willing and able to work here this long.”

IF I WASN’T DOING THIS JOB, I WOULD MOST LIKE TO: “My fantasy job is to be the star of a Broadway musical. When I was in high school, I got interested in Broadway musicals. I’d buy the cast albums or go to the library to listen to them. I just love the music, the stories, the glamour and the drama of Broadway musicals.

“My other fantasy jobs are to be a forest ranger, zookeeper and a ­drummer.”

OFF-THE-JOB INTERESTS: “Because I’m very interested in environmental matters, I am involved in several organizations that work in this arena in Athens and the state. Over the years, I’ve become very conscious of the importance of preserving the environment and making sure we keep the world safe and clean for future generations. You can do that in many ways, and I spend a lot of time in volunteer groups that work for land preservation and environmental education.

“I also like to walk, ride my bike, and Gail and I enjoy evenings at home watching movies.”

BOOKS I’D RECOMMEND TO OTHERS: “I’m actually in the middle of two books, which is a bit unusual for me because I read mostly newspapers and magazines.

“One book I’m reading is Whit Gibbon’s Snakes of the Southeast, which is really fascinating. And I’m also reading Michael Thurmond’s book Freedom: An African-American History of Georgia, 1733-1865. It’s a scholarly book that gives a very good perspective about the past treatment of minorities in Georgia.”

THE PERSON I MOST ADMIRE: “Although there are many, many people I admire for different reasons, I cannot say I’ve really tried to model my life after anybody.

“The strongest influence on my life were my parents, Betty Jo and Street Dendy. They instilled in me the values and principles that guide my life.”

THE ISSUE THAT CONCERNS ME MOST ABOUT TODAY’S WORLD: “I’m troubled by what I see as an increasing polarization in our society stemming from strongly held viewpoints on political and religious matters.

“Everyone is entitled to their opinions of course, and I certainly favor vigorous debate and exchange of ideas, but not when it results in strident divisiveness and conflict. I hope we can have greater tolerance and respect for the validity of all viewpoints and remember that while our personal beliefs about politics, religion and other matters may differ, we’re all striving for what is best for our country and our citizens.”