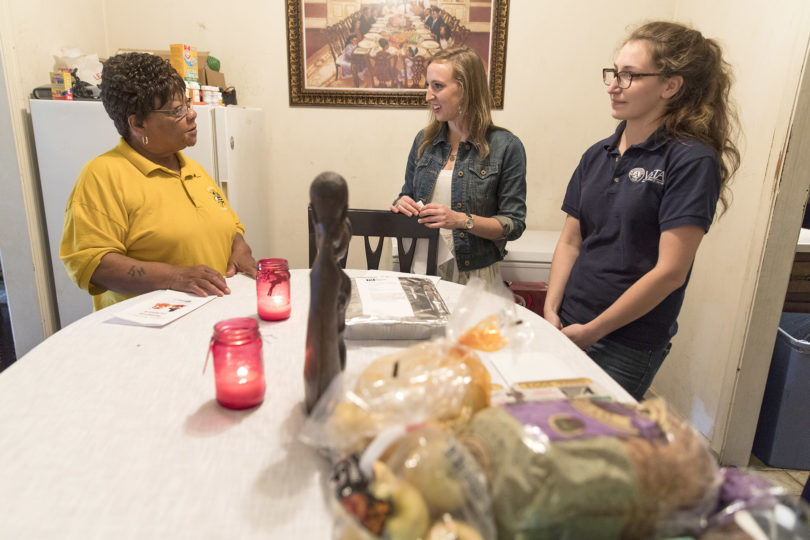 Five miles doesn’t seem like much. It’s a short car ride for some, and a morning jog for others.

But for student volunteers in the University of Georgia Campus Kitchen program, 5 miles from the main campus in Athens takes them to Montine Brightwell’s doorstep to deliver food. The realization that such a vast community need is so close to campus is a wakeup call for students, according to volunteer Allison Vita.

“You don’t expect to drive five minutes out and see people living with so much less,” said Vita, a fourth-year health promotion and behavior major in UGA’s College of Public Health.

Brightwell, a 69-year-old lifelong resident of Athens and an employee of the Clarke County School District, has been served by the Campus Kitchen for years.

“I just love it,” she said of the program. “I’m a diabetic, and the food is really healthy. Since it’s just me and my granddaughter, I hardly ever have to cook.”

Brightwell is one of many senior adults struggling with food insecurity. According to the Athens Community Council on Aging, one in every five seniors in Athens is classified as food insecure. This means they lack access to healthy, adequate and affordable food. The lack of access is not just a financial barrier but can also be transportation issues that prevent seniors from going shopping or health problems that limit their dietary options.

In 2010, a study by the ACCA and the foods and nutrition department in UGA’s College of Family and Consumer Sciences found that 78 percent of grandparents raising grandchildren were struggling to provide food for their families.

“We saw a significant need, but we knew we didn’t have the resources alone to meet that need,” said Eve Anthony, CEO of the ACCA.

This began the partnership with the Campus Kitchen Project, a national organization that partners with high schools and colleges across the country to implement food recovery plans and engage students as volunteers to prepare and deliver meals. UGA’s Campus Kitchen program is based in the Office of Service-Learning, which is jointly supported by the Offices of the Vice President for Instruction and the Vice President for Public Service and Outreach. Campus Kitchen at UGA is unique because it is the first to focus on senior food insecurity, a community-specific need.

Campus Kitchen has made me much more engaged as a community member. Because of this program, I’m considering focusing on nonprofit management in graduate school. — Allison Vita

In the 2016-2017 school year, students so far have collected more than 42,000 pounds of food and made more than 13,000 meals from scratch. Of the recovered food, 25,000 pounds has been redistributed as is to the program’s clients or donated to other local organizations around Athens.

Students are responsible for all aspects of the operation, from collecting food to cooking meals and delivering them. Vita is one of 30 student shift captains who are responsible for guiding volunteers in the kitchen and helping promote Campus Kitchen’s mission on campus. Over 300 students volunteer with Campus Kitchen each year, many of whom volunteer because of a class service-learning component. Although Vita’s service started as a class requirement, it has grown into a passion that is shaping her future career path.

“Campus Kitchen has made me much more engaged as a community member,” Vita said. “Because of this program, I’m considering focusing on nonprofit management in graduate school.”

The Office of Service-Learning also sponsors two AmeriCorps VISTA staff members. One is housed at the ACCA and manages all senior hunger programs and the other serves as the assistant coordinator of the Campus Kitchen program. According to Anthony, this partnership with Campus Kitchen has made a massive impact on food insecurity.

“Campus Kitchen has delivered 69,000 meals since the program started,” she said. “The students are stepping outside that UGA bubble and into the community, recognizing the need, and they’re taking ownership of it.”

Campus Kitchen is currently accepting food donations for their annual Turkeypalooza event to deliver holiday groceries and meals to families in time for Thanksgiving. To learn more about the Campus Kitchen at UGA and potential serving opportunities, visit their website at ck.uga.edu