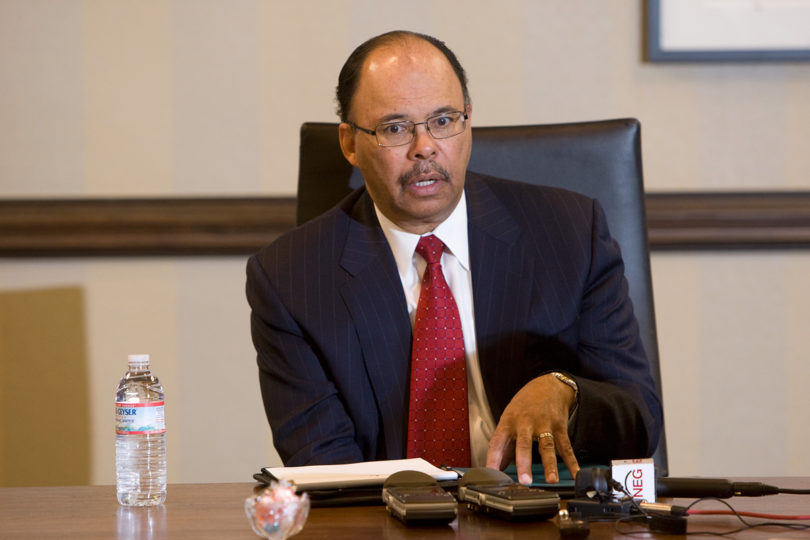 Chancellor Erroll B. Davis Jr. held a media briefing as part of his 2/22/10 visit to UGA where he also met with faculty

University System of Georgia Chancellor Erroll B. Davis Jr. visited UGA Feb. 22 in one of his three monthly visits to system campuses.

While here, he met with faculty, staff and students and also gave a press conference that focused on state budget shortfalls and their impact on education initiatives within the university system.

“With amazing growth in student enrollment and declining revenues, we are fighting desperately to maintain quality,” he said.

In the past three years, the system has had 42,000 new students coupled with $600 million in budget declines.

“Our solution can’t be just to pack classrooms with more and more students,” he said. “If we do that, we will have a generation of students who have been exposed to education and not a generation that has been truly educated and had their critical thinking skills refined and defined in smaller environments.”

Davis said that the system has taken a series of stop-gap measures, including hiring more part-time faculty members and restructuring courses into larger lectures and smaller break-out sessions. Plans for each institution differ, though.

Because of the rising student demand, layoffs would not be the system’s first response, but he said that layoffs are more probable in administrative areas than academic areas.

“It’s vital that the public understand that this system is not a cost—it’s an investment in the future of everyone in the state’s life,” he said. “If this system continues to sustain massive cuts, then we cannot provide the doctors, teachers and accountants that this economy will need to grow.”

He also said that the system needs resources to attract and to keep top-notch faculty at institutions in order to maintain quality. And if the university were to lose top-notch faculty—especially to private universities— because of the budget cuts, it would have a hard time rebuilding, he said.

“This economic malaise will end,” he said. “We will come out of it leaner, more nimble and more flexible.”