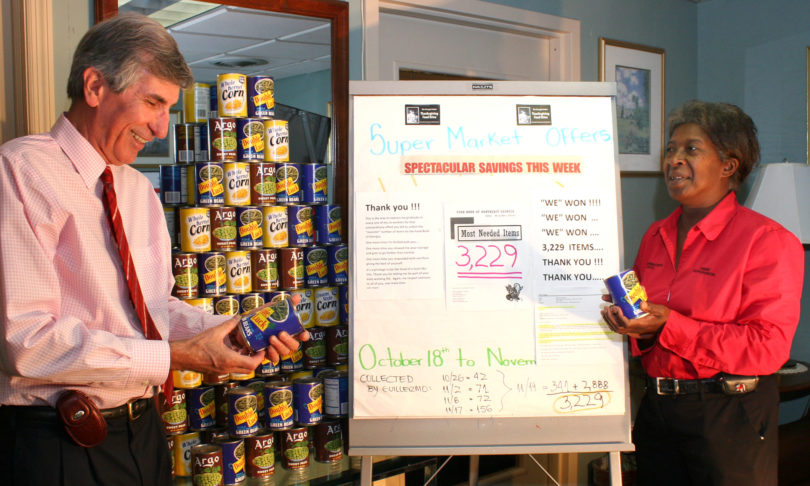 For Annie Burgess the annual canned food drive doesn’t mean bringing in 10 or 20 cans to donate to the food bank. Always the one to stand out, Burgess, a supervisor in the housekeeping department, brought in not one, but two carloads full of food—a total of 1,199 cans—to last year’s food drive at the Georgia Center for Continuing Education Conference Center and Hotel.

She’d participated in can drives with her grandson, Devon, before. One year she donated 700 cans.

“And every class my grandson was in, he always won through me,” she said.

Every year she brought cans in for the Georgia Center’s drive, but after being named the department’s team captain, Burgess decided to take the can drive to the next level and really go for a “wow” factor in the amount of cans her department brought in.

“We were really determined to win,” she said. “And I think we did pretty good.”

Not only did she bring in a surplus of cans, but as team captain she told the housekeepers on her shift that they were responsible for bringing in 100 cans. Each.

And seven housekeepers each brought in more than 100 cans.

Her secret was keeping her team organized and motivated. She held meetings for her shift several times a week and let them know what was on sale, and when the sale ended.

She had a flip chart with her coworker’s names and how many cans they brought in. The idea was to inspire others to match their coworkers’ donations.

John Huper, housekeeping manager, helped create a display with local sales and how many cans could be purchased for $1, $5 or $10.

For those without transportation, Burgess and Huper offered to drive or pick up the goods for coworkers.

“Whenever the cans would hit sales—Bingo!— I would move out with my money. That’s how we did it,” Burgess said. “It just went crazy. They started giving me $1, $2, $5. I had to tell them to slow down, so I could write their names down. They were throwing money at me. You would have thought we were in church they were giving me money so fast.”

Burgess also spent her days off calling friends and family to help with her effort.

“I would get home and have 100 cans on my porch waiting for me,” she said. “Honey, we had cans like you wouldn’t believe.”

In total her team, including a few add-ons from the grounds department, brought in 3,229 of the 4,634 food items the Georgia Center donated last year.

And these cans weren’t expired cans from the back of the pantry; they were new cans of food from the food bank’s list of preferred donations.

She did this without the help of coupons. The group relied exclusively on sales.

And while helping the hungry in this economy was on everyone’s mind, it didn’t hurt that the housekeeping department’s internal prize was an entire football weekend off and a meal at Olive Garden.

“We had people who wanted the prize so badly that they were going to their aunt’s house, they were calling from work ‘how many cans can you give me?’ I need more cans,’ ” Burgess said.

Burgess, who wouldn’t consider the prize for herself, waited until the last day of the food drive to bring both carloads of canned goods in for a big reveal.

She approached Guillermo Alzuru, a Web course developer in distance learning, and food drive coordinator for the past seven years.

“They took me downstairs and. . . I still get goosebumps,” Alzuru said. “There were stacks of stacks of boxes. Full boxes. All the way to the roof. Unbelievable. I thought it was a joke.”

Alzuru has seen this food drive go from collecting 870 cans to 1,570 cans, with departments competing against each other, steadily increasing to 2,867 in 2009, before last year’s recording setting numbers.

“Last year was unbelievable,” he said. “How could these people, earning the lowest salaries in the building, be able to bring in so much food? It was all due to true passion and the desire to help others.”

The Georgia Center’s 18th annual canned food drive runs Oct. 24-Nov. 21. Collection containers for nonperishable foods will be located at the building entrances. Financial contributions also will be accepted. All proceeds go to the Food Bank of Northeast Georgia and the Athens Area Emergency Food Bank. This year’s goal is 5,000 or more food items.