The University of Georgia Career Center announced the recipients of the 2021 Student Employee of the Year Awards and recognized the top 75 student employees in an online ceremony on April 15.

Student Employee of the Year 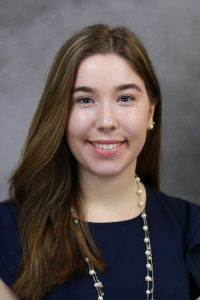 Krincek, an entertainment media studies major from Chatham, New Jersey, started working as a student media coordinator in the Office of the Dean of Students in August 2019.

“(Kelly’s) extensive and expert work for our department has shown that her time in Grady College has well prepared her for a productive career in media,” supervisor Don Reagin, assistant to the dean for marketing and communications, wrote in Krincek’s nomination letter. “Her infectious energy, enthusiasm, initiative and joyful spirit are what make her truly unique among the student staff with whom I’ve worked over the past 29 years.”

Krincek joined the small marketing and communications team at the Office of the Dean of Students when its full-time web developer was preparing to leave. The outgoing web developer spent her last days at UGA training Krincek, who learned quickly. It wasn’t long before Reagin trusted her with even the most challenging requests.

Krincek also led video production projects for the team, interviewing subjects, capturing footage and producing final products for student engagement initiatives. One of her most notable achievements was a video profile on a fourth-generation UGA family that she scripted, filmed and edited.

While quarantined at her home in New Jersey in spring 2020, Krincek took a leadership role to help prepare for the dean’s presence at the virtual New Student Orientation. Krincek worked to develop a solution to re-create the dean’s typical in-person interactions with students at the event and produced a 30-minute video of the dean’s presentation along with student testimonials.

“Without her, we would not have been able to reach out and engage students as effectively during the pandemic,” Reagin wrote. “She is the embodiment of excellence among student employees.”

The award-winning team was recognized for its role in supporting academic operations during the pandemic and transforming OIT permanently through the creation of new systems and programs.

The team members are:

When the pandemic began, the team helped OIT’s Solutions Center create a hierarchy that sorts service desk requests into two tiers, allowing the student workers to handle 80% of the overall support tickets. This freed up the full-time staff to work on higher level problems. According to supervisor William Foglesong, the Solutions Center manager, the new support structure ensured a smooth transition to online learning during the pandemic without overwhelming the OIT team.

“I will never be able to convey in words how important our student worker team is to the Terry College of Business nor how proud I am of their accomplishments,” Foglesong wrote in the team’s nomination letter. “What they put forth has dramatically shaped how our Solutions Center team functions, our roles and responsibilities, our camaraderie and even our worth to the Terry College of Business.”

Working remotely, the student worker team alleviated much of the burden on OIT during the pandemic and even took on new responsibilities, including captioning over 350 hours of course materials to accommodate online learning for students with disabilities. Upon returning to the office, the team helped modify work spaces for social distancing and supported a successful launch to the 2020-21 academic year.

The group also established a new program after identifying the need to quickly administer technology training to faculty and staff during rapidly changing transitions like a pandemic. The program, Terry Tech Tutors, allows student workers to teach and train faculty and staff in different areas of technology.

“Terry Tech Tutors is a legacy that this group of talented students is setting up and leaving behind for the next wave of students that take their place,” Foglesong wrote. “They have set up a service that will continually add value to Terry.”

April Bullard, a senior financial planning major, was recognized as the runner-up for Student Employee of the Year. Bullard is from Monticello, Georgia, and is the lead intern with the Student Success and Advising Center at the College of Family and Consumer Sciences. Senior art and interior design major Maelyn Ehrman from Tucker, Georgia, rounded out the top three student employees. She is a lead peer tutor with the Division of Academic Enhancement.

Each spring, the UGA Career Center celebrates the contributions students make to labs, offices and programs across campus. The award recipients are determined based on nominations by supervisors.

A complete list of the top 75 student employees is available online.