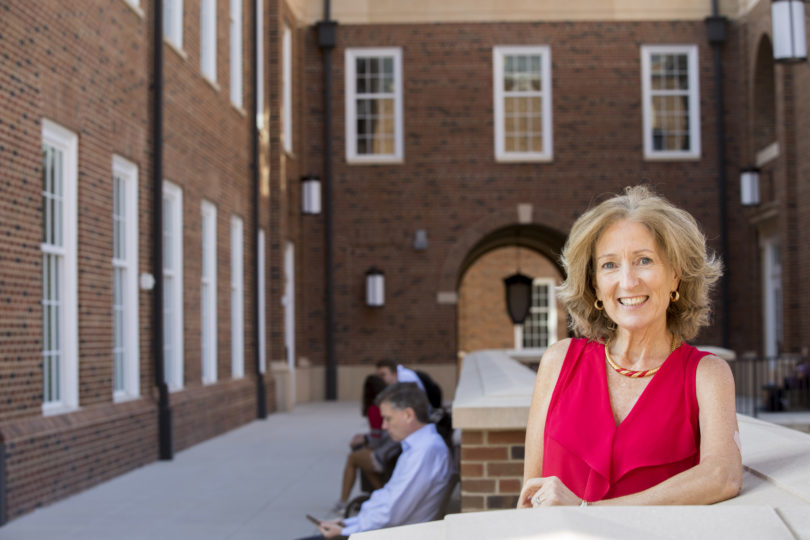 Patti Zettek admits that she made mistakes in her first managerial role—like arriving at the airport for her first national sales meeting trip wearing shorts and sandals. But she learned from those experiences. 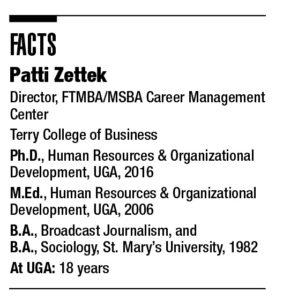 “When I was a young manager, I was clueless on what I now know are the usual do’s and don’ts of corporate America,” she said. “Now it’s my job to make sure students know that kind of information before they enter the workplace.”

As the director of the Terry College of Business’ Full-Time MBA/MSBA Career Management Center, Zettek shares the knowledge she’s gained with the students she’s preparing for their new career.

“This is really why we’re all here—because of the students,” she said. “It makes a huge impact on the way you think about your work in higher education.”

Zettek worked in sales before starting her career at UGA in 2001 as a document conversion coordinator in the Disability Resource Center, where she managed a student workforce who provided alternative text such as books on tape or enlarged text. She also worked with faculty to provide testing accommodations.

She said she learned quite a bit from the students who use the DRC and their tenacious attitudes.

“It was eye-opening for me,” she said. “They call them invisible disabilities, and I didn’t realize how many students are faced with them.”

Almost as soon as she started working at UGA, Zettek started classes toward her master’s degree through UGA’s Tuition Assistance Program. In fact, she learned about her job at Terry College from a fellow student in her program. And now, she can share her own back-to-school experience with the students she works with who are taking time away from their careers to pursue an MBA.

While Zettek agrees that coaching plays an important role in preparing students for the job market, she also knows the value in understanding the unwritten “rules” of an organization’s culture. Companies, she said, don’t always recognize the things business students are going to want to know about them.

The students who come through the MBA Career Management Center already have work experience, and Zettek acknowledges that it can be hard for them to get back into the mindset of being a student. Not only are they learning core competencies, but they also are embracing the challenge of changing career paths.

“They’ve got really strong ideas and goals, and sometimes they just need help making those explicit,” she said.

That shift can be their biggest challenge and the most exciting part, Zettek said. She sees the center as a partner with students to help them see where they are and prepare for where they’re going.

Some of the lessons Zettek hopes her students learn are to be flexible, to work with a variety of people and personalities, and to know when to lead, when to follow and when to get out of the way.

Every student’s path through the career center is a little bit different. They all start together with a set core curriculum of foundational classes. The staff at the center helps them write a new résumé and cover letter before working with the students on soft skills.

“Sometimes you have to help them flex muscles that they’ve never really worked on before, so we have a different approach based on where they are with those soft skills,” Zettek said.

To do that, there is a career course (taught by Zettek and her team), career coaching and leadership advising all meant to train those muscles. And through the process, they also learn perseverance and resilience.

“The role I play is to be a connector,” she said. “I consider myself a career matchmaker. We want to find the right cultural fit and make sure the students shine before sending them to new employers.”

Zettek’s work at UGA has been recognized by others. She earned the Dwight Douglas Award from UGA Student Affairs in 2006 and the Terry College Community Building Award in 2012, among others.

“I’m the one who really benefits from these students,” she said. “I’m blessed to work with people who make it very easy to build a community.”