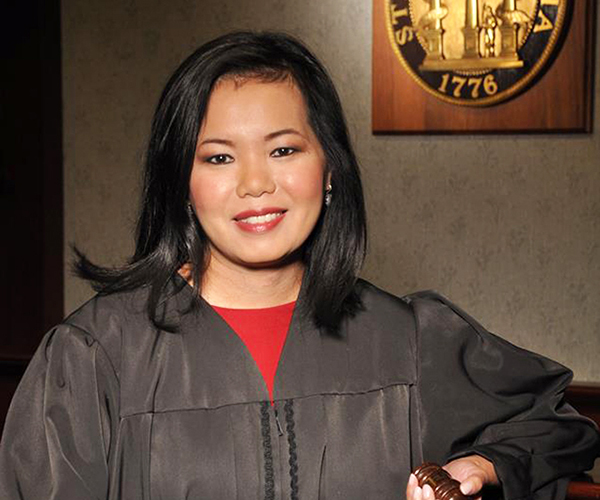 “I’m glad to be able to open doors for other people who are behind me and set an example,” says Carla Wong McMillian JD '98. The UGA School of Law graduate was named to the Georgia Supreme Court in 2020. She is the court's first Asian American justice. (Photo Special)

But in her junior year of college, McMillian JD ’98 ran into her high school speech and debate coach when she went home to Augusta on a break. He suggested going to law school instead. She’d never thought about becoming a lawyer, but on his advice, she took the LSAT, applied to law school, and got into the University of Georgia School of Law. She hasn’t looked back.

Fresh out of law school, she started working for Federal District Court Judge William O’Kelley in Atlanta, followed by a partnership at Sutherland Asbill & Brennan (now Eversheds Sutherland). She didn’t have any plans to leave the firm. But then two superior court judges resigned in Fayette County, where she lived.

She’d thought about applying to fill one of the positions, but if she was selected, she knew that she’d eventually have to run for election. “That was something that I never really wanted to do,” McMillian says.

She thought she’d made up her mind, but she kept thinking about her two children, who were young at the time.

“I wanted to be able to tell them that I would do what I could to serve the community where they were going to be growing up,” she says. “Also, especially for my daughter, that I was not going to be afraid to take risks, even though I was very comfortable in my career and at the firm.”

With the encouragement of her husband, fellow lawyer and UGA Law grad Lance McMillian JD ’98, she applied and was appointed to the State Court of Fayette County by then- Gov. Sonny Perdue DVM ’71.

A few years later, after a successful election campaign, a position on the Georgia Court of Appeals opened.

“Several people asked me whether I would apply. I said no.”

“I’m glad to be able to open doors for other people who are behind me and set an example,” McMillian says. “Growing up in Augusta, Georgia, even though my family has been in Augusta for over 100 years and there’s a longstanding Chinese community there, we didn’t see many Asian Americans in public service or in leadership positions. I’m glad to be able to be in this position so that I can show others like me growing up here in the South that yes, you can become leaders in whatever field you choose.”

Because of the COVID -19 pandemic, she was sworn in outdoors with just the governor, his staff, and her immediate family members who live in her household. But the ceremony was still significant to McMillian.

“It was April 10, and my father had actually passed away 30 years ago that day,” McMillian says. “It was bittersweet that I was able to be appointed to the Supreme Court, but it was also the day that I was remembering my father. He never got a chance to see me even graduate from high school because I was only 16 when my father passed away. I think he would have been very proud.”