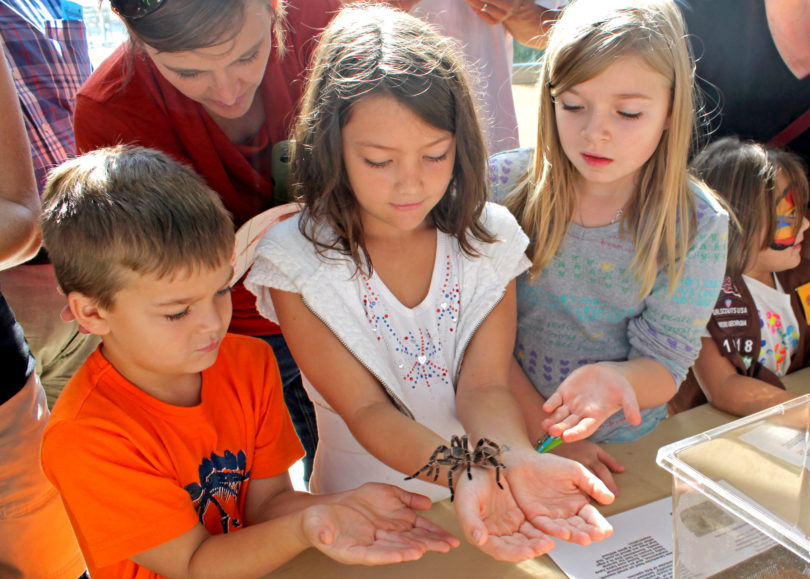 About 900 visitors looking for the chance to take in, touch or even taste bugs swarmed the State Botanical Garden on Sept. 15 for the annual Insect-ival educational fair.

Now in its 20th year, Insect-ival offers the community a hands-on learning experience with bugs. Entomologists, UGA students and other volunteers were available to answer questions about the critters.

Largely a draw for children and families, the event did offer one question for debate: What is your favorite bug?

For Livy Beadles and Abby Richardson, 7-year olds from a Jackson County Girl Scout troop, the answer was obviously butterflies.

The two girls had their faces painted with colorful butterfly wings and had spent part of their morning chasing the winged insects perched around the gardens.

They were less enthused about the big, hairy arachnid that 9-year old Noah Buley held a few yards away at the live tarantula exhibit in the conservatory staffed by UGA entomology graduate Danny Pitt.

Buley, giddy with excitement, was surprised by how it felt.

Ana Mowrer, a 6-year-old from Athens, held the tarantula too, but not for long.

Mowrer called the tarantula experience “weird.” Her preferred experience at Insect-ival was with crickets—eating them.

The overall goal of Insect-ival, co-founded by retired UGA entomologist Murray Blum, is to give visitors a better appreciation of insects.

“Because some insects are pests, they all tend to get bad press,” Blum said. “Insect-ival encourages a positive attitude toward insects by showing how fascinating, beneficial and necessary they are to the environment and humans.”

Assisting the hundreds of guests were about 50 bug and nature enthusiasts who volunteered to helped manage the event including a couple dozen UGA students. Entomology grad student Jayce Brandt was one of them. Wearing a T-shirt that read “Carpe Insectum: Seize the Insect,” Brandt worked at a butterfly exhibit where he answered questions and also aided with some arts and crafts.

As a vice president of the H.O. Lund Entomology Club, Brandt said he was hoping to share his enthusiasm and knowledge of bugs with the hundreds of children who came to visit.

“That’s how it started with me,” he said.

Insect-ival’s climactic moment came when visitors gathered on the garden’s lawn for the monarch butterfly release. Dozens of butterflies were brought out in a large wire cage. Classic City High School science teacher Jim Maudsley explained that, once released, the butterflies migrate to Mexico for the winter.

With everything in place, he and the crowd of visitors counted down from three; the cage was opened; and for a moment, a wave of yellow and orange wings floated over the heads of visitors.

With arms in the air, screaming children chased the winged insects across the lawn. Others waited for one to land near or on them before quietly watching or carefully trying to pet them. And that’s when it became clear which bug was the star of the day.

When it comes to appealing to boys and girls, the brave and the squeamish, there’s hardly a better insect diplomat than the butterfly.