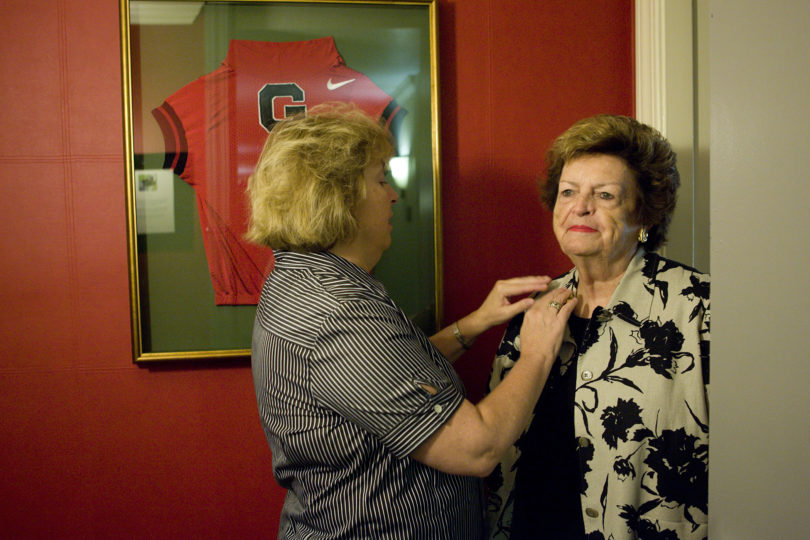 Cecelia Seiler, wife of Frank W. “Sonny” Seiler and owner of the University of Georgia lineage of “Uga” Bulldog mascots for more than a half century, passed away in Savannah on Thursday.

Seiler, the former Cecelia Gunn, was a native of Columbus, Georgia. She married Sonny while they were students at the University of Georgia. In 1956, while Sonny was in law school at UGA, the couple received an English Bulldog as a belated wedding gift from Frank Heard, a family friend of the Gunns.

That fall, Cecelia altered a red children’s T-shirt to fit the puppy and sewed a “G” she cut out of black felt onto the garment. On Sept. 19, 1956, the Seilers dressed the bulldog in the shirt and brought it to both a party at Sigma Chi fraternity house, where Sonny had been president as a UGA undergraduate, and then to the Bulldogs’ football game against Florida State.

Shortly thereafter, Uga I was “collared” as the official mascot of the University of Georgia.

Cecelia is survived by Sonny; children Swann Seiler and Charles Seiler of Savannah, Bess Thompson of St. Simons and Sara Storey of Athens; and seven grandchildren.

Comment from J. Reid Parker Director of Athletics Greg McGarity:
“Our thoughts and prayers are with the family during this difficult time. The Seiler family has done so much and means a great deal to the entire University of Georgia community.”

Comment from UGA football coach Mark Richt:
“My heart goes out to Sonny and the Seiler family on the passing of Cecelia. I know that my thoughts and prayers and those of the entire Bulldog nation are with the family.”

Comment from former UGA AD and football coach Vince Dooley:
“Our thoughts and prayers go out to Sonny and the family. Cecelia was truly the matriarch and a force behind the Uga tradition. God bless her and the family.”