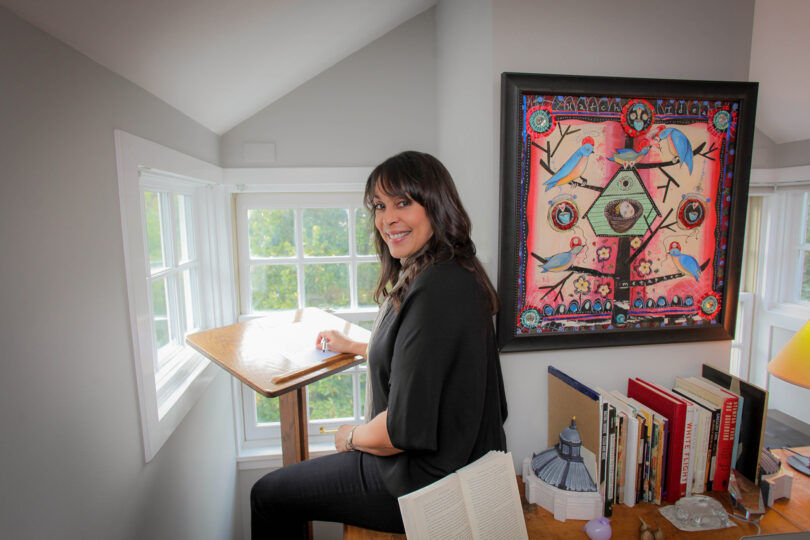 American author and Pulitzer Prize winner Natasha Trethewey will be visiting the University of Georgia on April 21 and 22. Trethewey, who is a UGA alumna, was appointed United States poet laureate in 2012 and again in 2013, and she won the 2007 Pulitzer Prize in Poetry for her 2006 collection “Native Guard.”

The Willson Center for Humanities and Arts welcomes Trethewey as the annual Delta Visiting Chair for Global Understanding. Trethewey, who is Board of Trustees Professor of English in the Weinberg College of Arts and Sciences at Northwestern University, will visit UGA and Athens for a slate of public events and informal conversations with college and high school students.

A reading in the UGA Chapel at 4 p.m. Thursday, April 21, will be followed by a public reception on the lawn outside the Chapel. On Friday, April 22, at 6 p.m., Trethewey will take part in a public conversation with professors Barbara McCaskill and John Lowe of the department of English at the historic Morton Theatre in downtown Athens. Books will be offered for sale at the event by Avid Bookshop. During her two-day visit, Trethewey will also meet with students at both UGA and Clarke Central High School.

The Chapel event will be free, general admission and open to the public. The Morton Theatre event will be free and open to the public, but ticket reservations must be made online through the Morton Theatre box office at www.mortontheatre.com beginning at 9 a.m. April 1. Face coverings are encouraged based on preference and assessment of personal risk.

Trethewey has published five books of poetry including “Monument: Poems New & Selected” (2018), which was longlisted for the 2018 National Book Award, and “Native Guard” (2006), which was awarded the 2007 Pulitzer Prize in poetry. She is also the author of “Beyond Katrina: A Meditation on the Mississippi Gulf Coast” (2010) and “Memorial Drive: A Daughter’s Memoir” (2020), a New York Times best seller about her mother’s murder in Atlanta while Trethewey was attending UGA.

She was named the 19th poet laureate of the United States in 2012 and selected for a second term a year later. Her many honors include fellowships from the National Endowment for the Arts, the Guggenheim Foundation and the Rockefeller Foundation, and election to the Board of Chancellors of the Academy of American Poets in 2019. The Library of Congress awarded her the Rebekah Johnson Bobbitt National Prize for Lifetime Achievement in Poetry in 2020.

Trethewey has roots in Georgia and at UGA, where she earned her bachelor’s degree in English before moving to Hollins College and the University of Massachusetts at Amherst for her master’s and Master of Fine Arts, respectively. She spent part of her childhood in Atlanta and taught for a time at Emory University. The University of Georgia Libraries inducted Trethewey into the Georgia Writers Hall of Fame in 2011.

“Natasha Trethewey creates poetry and memoir that move and inspire readers across generations and regions because she uses her identity and personal history – as a Southerner, as the daughter of an interracial couple, as an artist and teacher, as an African American – to examine the afterlives of our national histories of slavery, civil war and racial apartheid,” said McCaskill, professor of English and associate academic director of the Willson Center. “As the title of her collection of new and selected poetry, “Monument,” suggests, her writing channels voices of both ordinary and celebrated figures across time to examine who and what we remember of the past, and how these memories going forward may or may not serve us in the face of pressing global challenges such as climate change and pandemics.

“Trethewey is both a national and a global poet, whose timeless, innovative work has earned her a distinguished place in the literary canon alongside Whitman, Dickinson, Brooks, Hughes and other beloved and treasured American writers.”

As part of the Delta Chair program, the Willson Center has provided copies of Trethewey’s books to UGA and Clarke Central faculty for distribution to students, free of charge, in spring 2022 classes that include the writer’s work.

“Natasha Trethewey’s visit as Delta Chair gives students an opportunity to engage directly and personally with a recent Poet Laureate of the United States who is a graduate of their own university,” said Carolyn Medine, professor of religion and director of the Institute of African American Studies. “Such encounters and interactions with eminent figures in the arts and humanities are among the unique and irreplaceable experiences offered by a great public institution of higher education, and programs like the Delta Chair help ensure that UGA belongs in that category.”

The Delta Visiting Chair for Global Understanding, established by the Willson Center through the support of The Delta Air Lines Foundation, hosts outstanding global scholars, leading creative thinkers, artists and intellectuals who engage with audiences on and off the UGA campus through lectures, seminars, discussions and other community events. The Delta Chair program aims to foster conversations that engage with global perspectives through the humanities and arts. The chair was last held by Michael Ondaatje, the award-winning author of “The English Patient,” in October 2019.

The Delta Chair is founded upon the legacy of the Delta Prize for Global Understanding, which from 1997-2011 was presented to individuals – including Nelson Mandela, Mikhail Gorbachev, Ted Turner, Desmond Tutu and Jimmy and Rosalyn Carter – whose initiatives promoted world peace by advancing understanding and cooperation among cultures and nations.