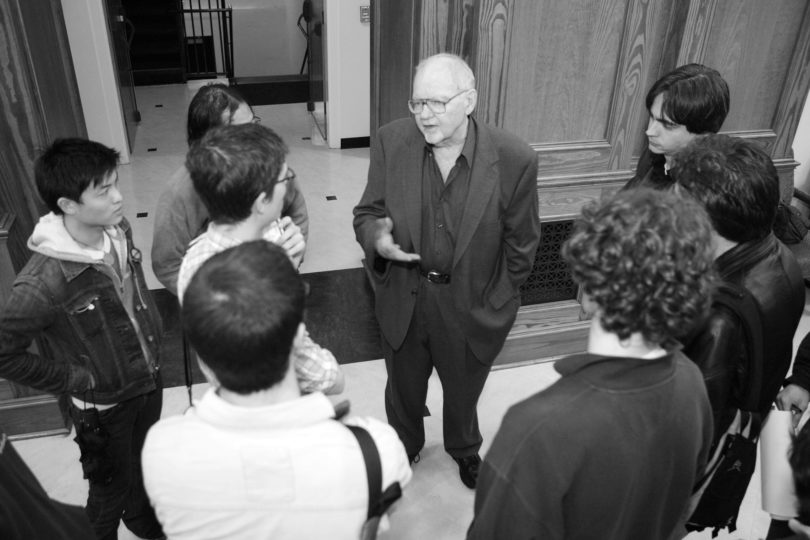 Frederic Jameson answers questions at the post-lecture reception held in his honor at Moore College.

It was clear from the packed house at the Chapel, excessive promotion and raucous applause that Duke University’s Frederic Jameson was not just another lecturer.

The cultural critic, author and professor appeared as an intellectual rock star to a chorus of followers. Or at least he did at first.

English, film and comparative literature professors rubbed elbows with undergraduate and doctoral students before the lecture. But despite the democratic feel, the talk was far from accessible.

After a brief introduction, Jameson took the stage, made a couple jokes and launched into fast-paced, scripted talk, covering interpretations of the likes of Paul Ricoeur and Virgil. He called the speech “Poetics of the Dialectic.”

Reading directly from stacks of paper on the podium, Jameson started with the force of an intellectual juggernaut and didn’t slow.

“I didn’t follow much of it,” third-year student Brandon Roddey admitted. An English and philosophy double major, Roddey said he usually does not attend lectures because he never hears about them. But Jameson’s well-­publicized appearance made him decide to see what the fuss was about.

“They made a big deal about it. Normally I don’t hear about thing like this,” he said.

The university’s master calendar can be packed with three lectures a day from visiting minds, but few received the promotion Jameson did. Not only did the talk get the customary posters across campus, but the one-hour lecture had its own Web site (www.jamesonatuga.com) and full-page spread in Flagpole.

At a reception following the speech, students surrounded Jameson, who politely fielded questions. Some hoped to debate and asked him to stretch beyond covered materials. Others hoped for clarification.

“I’m in my first sociology of theory class, so I wasn’t familiar with a lot of what he talked about,” said Jacqueline Smith, a senior. “A lot of it I just didn’t understand.”

Some students however, couldn’t get enough. Jameson joked that “the length of time a human body can take lecturing,” is about an hour, but Ryan Perry disagreed.

“I thought it was a great speech. I wish he had had more time. I know I could’ve listened to him speak for another two hours,” the literature student said.

Jameson is the author of about 20 books across the categories of film, architecture, art, philosophy, literary theory, literary criticism and science fiction.

A number of his books, including Postmodernism, or, The Cultural Logic of Late Capitalism, have become textbooks for college classes.