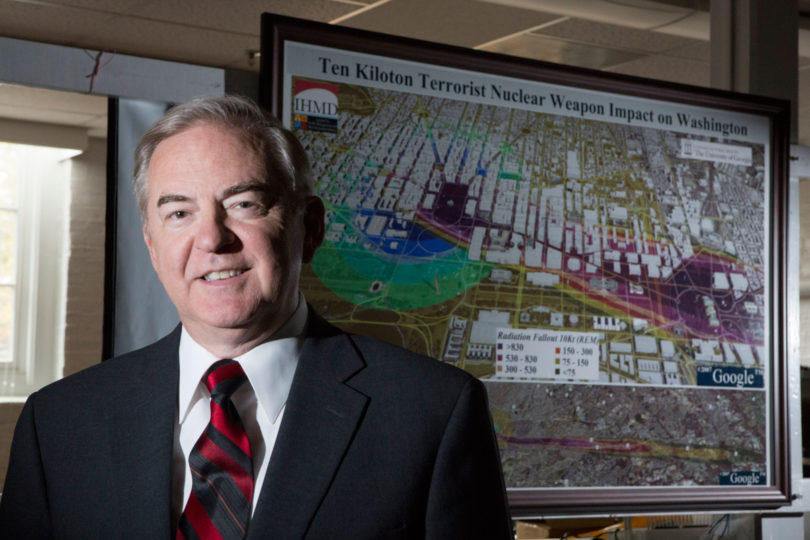 Athens, Ga. – Cham Dallas, professor of health policy and management in the College of Public Health and director of the Institute for Disaster Management, has been named University Professor, an honor bestowed on faculty members who have made a significant impact on the University of Georgia beyond their normal academic responsibilities.

Dallas is a world-renowned expert in disaster management. He began his career in the College of Pharmacy in 1985, where he directed the interdisciplinary toxicology program and UGA’s Center for Mass Destruction Defense, which was a Centers for Disease Control and Prevention Center for Public Health Preparedness. In 2007, he founded the Institute for Disaster Management in the College of Public Health.

“Our state, nation and world are better prepared to manage a range of disasters thanks to the extraordinary dedication of Dr. Dallas,” said Senior Vice President for Academic Affairs and Provost Pamela Whitten. “He is a remarkable exemplar of how the University of Georgia’s teaching, research and service missions complement each other to create a more secure and prosperous future.”

Dallas has performed research in emergency preparedness that has been funded by the CDC, the U.S. Department of Homeland Security, the U.S. Department of Agriculture and the Health Resources Service Administration, among others, and he worked with the CDC and the American Medical Association to develop the National Disaster Life Support family of courses, which are used for mass casualty training in all 50 states and in 17 countries.

Dallas has garnered an average of more than $1 million per year in external research funding over the past 18 years, including $14 million in grants as principal investigator and $5 million as co-principal investigator. His scholarship is among the most heralded in his field. For example, an article on the vulnerability of the U.S. health care system to nuclear detonations ranked No. 1 in the world for downloads in its first month at biomedcentral.com, an online database of 250 biomedical journals, and the paper remains among the top 100 papers of all time at the site. Other articles have attained similar success, including a report on the 70th anniversary of the Hiroshima and Nagasaki atomic bomb detonations that had 250,000 downloads in 2015.

In addition, Dallas has presented his work to the National Academy of Sciences and the U.S. House and Senate Homeland Security committees. Dallas, who was among the first international scientists to visit Chernobyl following its nuclear disaster in 1986 and led 12 expeditions into the most highly radioactive contaminated areas to study its impact, has participated in national and international programming on CNN, CBS and FOX and co-hosted Public Health Impact, a statewide educational television series. He also has spoken at the United Nations three times on the lessons learned from the Chernobyl disaster that are relevant to nuclear war medical response.

“While attaining an exceptional and documented national/international reputation in public health, (Dallas) also has been a key influence in the development of well-funded research and instructional programs at the University of Georgia,” Phillip L. Williams, dean of the College of Public Health, wrote in a nomination statement. “He has produced truly innovative research and learning opportunities for UGA students in the Institute for Disaster Management.”

In the building that houses the Institute for Disaster Management on UGA’s Health Sciences Campus, Dallas configured the chief lecture room as an Emergency Operations Center, which allows his students to simulate real-life disaster management activities like those at the CDC and Georgia Emergency Management Agency. In addition, Dallas worked to develop the concentration in disaster management for Master of Public Health students and the Graduate Certificate Program in Disaster Management, which is open to graduate students in programs across campus, as well as the proposed new undergraduate program in disaster management involving a minor or undergraduate certificate.

University Professors receive a permanent salary increase of $10,000 and a yearly academic support account of $5,000. Nominations from the deans of UGA’s schools and colleges are reviewed by a committee, which makes a recommendation to the provost. No more than one faculty member per year can receive the honor, which was first awarded in 1974

To learn more about University Professorships and for a list of past recipients, see http://provost.uga.edu/index.php/resources/professorships/university-professorships.