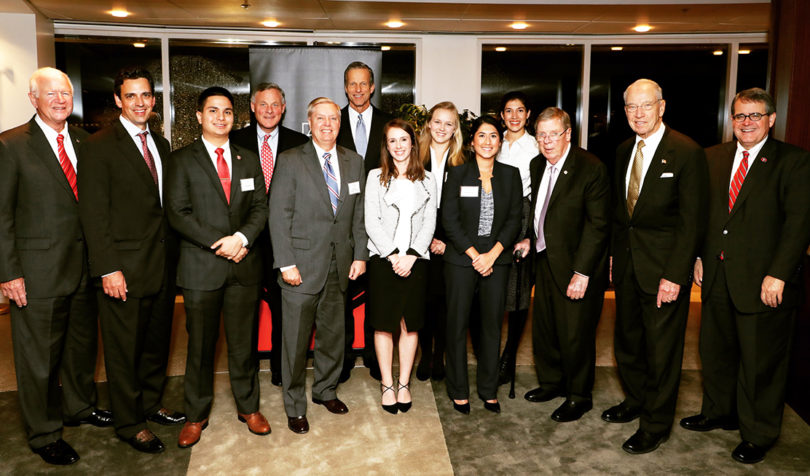 Colleagues and friends of former U.S. Sen. Saxby Chambliss have now exceeded the goal of $1 million for the Chambliss Leadership Forum endowment at the University of Georgia. The fourth fundraising dinner for the program was held earlier this week at the Altria office in Washington, D.C. Chambliss and his wife, Julianne, attended along with UGA President Jere W. Morehead, current UGA student interns and members of the U.S. Congress.

“One of the components of the Chambliss Leadership Forum is a unique experiential learning opportunity for students to live and work in our nation’s capital while continuing their pursuit of an academic degree,” said UGA President Jere W. Morehead. “This is an exceptional experience and the University of Georgia is grateful to Senator and Mrs. Chambliss and the many contributors who are supporting the Chambliss Fellowship Program.”

“Julianne and I are grateful for the support of so many friends and former colleagues,” said Chambliss. “The Chambliss Leadership Forum at UGA is close to our hearts, and we are grateful that so many folks from both sides of the aisle see the value in providing bright students, regardless of economic background, the opportunity to live and work in our nation’s capital. I believe strongly these internship opportunities are valuable not just to the students, but to the university, our state, and ultimately those public institutions where they serve.”

“Thanks to the generosity of Senator and Mrs. Chambliss, my semester in D.C. has furthered my education more than I could imagine,” said Elrhalami. “I am inspired by the gracious support of so many who have chosen to invest in my future and whose support will grow generations of future leaders.”
In addition to the current Fellows, inaugural Chambliss Fellows Ishana Ratan and Eleanor Traynham attended the event. Ratan interned for the Center for American Progress during her time as a Chambliss Fellow and now works as an international trade project assistant at Wiley Rein LLC in Washington. Traynham, who worked as an intern in the office of U.S. Sen. Johnny Isakson, also chose to stay in D.C. following her tenure as a Chambliss Fellow. She now works as a scheduler for U.S. Rep. Sean P. Duffy (R-WI).