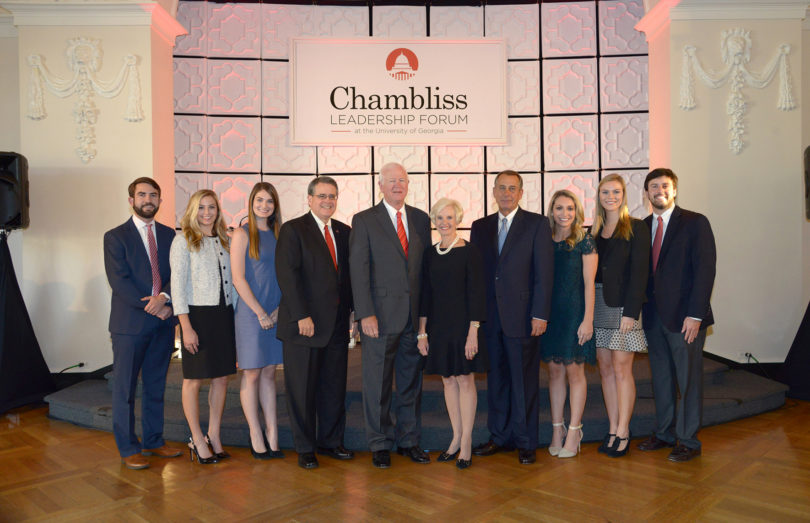 Inaugural Fellows to be named later this year

Atlanta, Ga. – Former Speaker of the U.S. House of Representatives John Boehner was the featured guest at Tuesday night’s Chambliss Leadership Forum fundraising event held in honor of former Georgia Sen. Saxby Chambliss and his wife, Julianne. This marks the third event of the Chambliss Leadership Forum, which has raised more than $500,000 to provide scholarships for University of Georgia students to spend a semester in Washington, D.C.

“Julianne and I are excited to be able to give back to our alma mater by helping provide such an invaluable experience to UGA students,” Chambliss said. “Thanks to many generous friends and colleagues, we are thrilled to announce that the first class of Chambliss Fellows will head to Washington next semester.”

The first Chambliss Fellows, who will be selected through a competitive process, will be announced later this year. The students will be provided academic assistance to live, work and pursue their passion in Washington, D.C.

“The Chambliss Leadership Forum will allow outstanding UGA students to participate in life-changing experiential learning opportunities in our nation’s capital,” said UGA President Jere W. Morehead. “I am deeply grateful to Senator Chambliss and Julianne and to the many supporters who have helped to launch this exceptional initiative.”

The Chamblisses and Boehner were joined by current UGA students and supporters of the Chambliss Leadership Forum for a discussion about the challenges facing future leaders.

“Meeting the unique challenges facing our nation today means we need to advance a unique class of leaders,” Boehner said. “The Chambliss Leadership Forum seeks to do just that, so I am honored to be a part of it and support my friend, Saxby Chambliss.”

About Sen. Chambliss
Chambliss was first elected to Congress in 1994 as a representative of Georgia’s 8th District. He was elected to the U.S. Senate in 2002, where he served until 2015. He has been recognized for his work on agriculture, defense, budget and national security issues throughout his legislative career. He served as vice chairman of the Senate Select Committee on Intelligence for four years and as chairman of the Senate Committee on Agriculture, Nutrition and Forestry for two years. Chambliss received his bachelor’s degree in business administration from the University of Georgia in 1966 and his Juris Doctor from the University of Tennessee in 1968.

About Speaker Boehner
A former small businessman, John Boehner served as speaker of the U.S. House of Representatives for nearly five years. Boehner got involved in state and local government after seeing firsthand how high taxes and red tape impact entrepreneurs and in 1990, voters sent him to the U.S. House. Elected as House majority leader in 2006, Boehner led the opposition to job-crushing proposals while promoting better solutions to the challenges facing American families. On Jan. 5, 2011, Boehner took the gavel as speaker of the House following the historic
2010 election in which Congressional Republicans, under Boehner’s leadership, picked up 63 seats in the U.S. House. During his tenure, he addressed the drivers of America’s debt eliminating pork barrel “earmarks,” by reforming Congress and rebuilding the bonds of trust between the American people and their representatives in Washington.