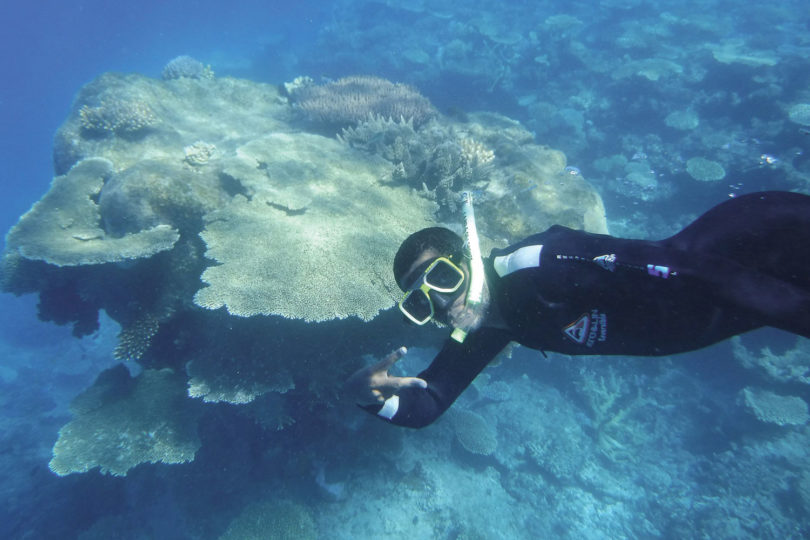 UGA alumnus Chandler Sharp's dedication to protecting the environment has taken him from Zoo Atlanta to the Georgia Sea Turtle Center and all the way to the Great Barrier Reef off Australia's east coast. (Photo Special)

Many little boys do, but for Sharp BSFR ’15 it was more than just a phase.

“I wanted to know every dinosaur,” he says. While that love started with prehistoric creatures, it soon blossomed into a love of all things nature. “As I got a little older, I started learning more about animals and plants we see today. I found out that many of them are endangered or going extinct, just like the dinosaurs did.”

His concern for biodiversity, and the well-being of nature in general, led him to the Warnell School of Forestry and Natural Resources at the University of Georgia.

As an undergraduate, he interned for Zoo Atlanta, helping staff provide enrichment and care for all its lions, tigers, bears, and other carnivores. He started volunteering there during high school, and he got to do a little bit of everything, from teaching guests about the animals they were seeing, to preparing animal diets, to cleaning their habitats.

After graduating with his bachelor’s in wildlife biology, Sharp began working at the Georgia Sea Turtle Center on Jekyll Island through AmeriCorps, the national and community service nonprofit. He helped in veterinary procedures, interacted with visitors, and provided care for sick and injured wildlife, which included everything from sea turtles to bald eagles. During the busy season, the staff would sometimes end up working 12-hour days, but it was worth it when they gathered to release rehabilitated animals into the wild.

After stints on Tybee Island and in the Smoky Mountains, Sharp landed in Texas. As a conservation educator at the Dallas Zoo, he engages zoo visitors through small animal encounters and educates them about the zoo’s various conservation initiatives from prairie restoration for monarch butterflies in Texas to rainforest conservation for gorillas in the Congo.

But that’s just his day job. Sharp is also pursuing a master’s degree in biology from Miami University in Ohio. The best part of the program is the field work requirement that sent him to Baja, California to learn the basics of field methods in the Sea of Cortez and Baja desert and to the Great Barrier Reef off the coast of Australia to discover the threats facing coral reefs and the animals that call them home. Next up is Namibia to work with the Cheetah Conservation Fund to learn about solutions for inevitable human-wildlife conflicts between farmers and big cats making their way further into human settlements as their habitat disappears.

For Sharp, though, all his experiences boil down to one thing: helping others get back to nature.

“Everything we need—from the food we eat to the air we breathe—is all tied to nature,” Sharp says. “A lot of the natural world is in danger due to human activities ranging from land conversion to plastic pollution. Yet many people are unaware of the severity of the problem. Connecting people with nature and inspiring them to take action for its benefit, that’s what I really love doing. By saving nature, we save ourselves.”