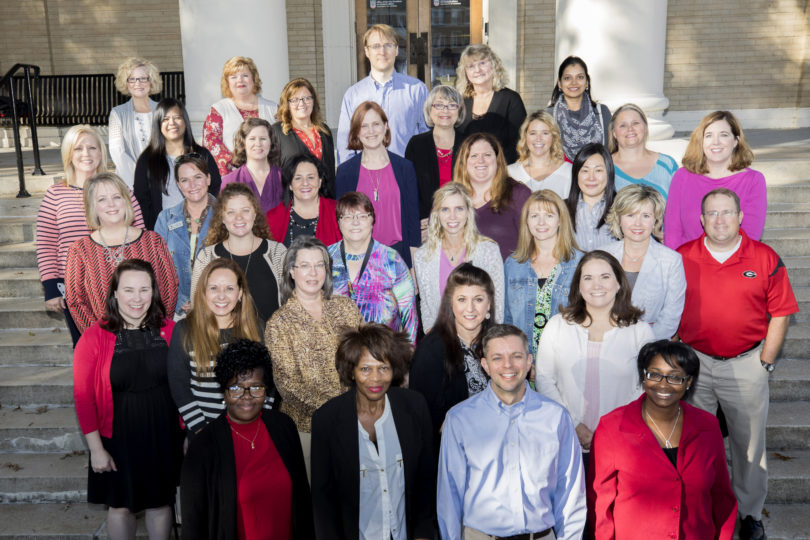 Change Champions spread the word and answer questions about the OneSource Project.

The Change Champions are here to help UGA through one of its biggest financial and human resources transformations.

About 150 nominated or volunteer representatives across UGA’s various divisions are assisting fellow faculty and staff in making a smooth transition to Oracle’s PeopleSoft starting in 2018 as part of the OneSource Project.

The Change Champions are outgoing, involved individuals with strong communication skills who advocate for the OneSource Project, promoting the change and facilitating two-way communication between the project and its end users.

“There isn’t a requirement for a particular personality type. You really just have to be willing to communicate,” said Steve Gibson, business affairs manager in the College of Agricultural and Environmental Sciences Business Office who is a part of the team that created the group. “It’s been a fantastic experience so far, just connecting with people from every nook and cranny of the university.”

The PeopleSoft system will link all UGA departments—across the U.S. and internationally—and handle financial and human resource processes. Making sure people are updated and on board is central to OneSource’s mission, but the team knew from the beginning that it would need help reaching UGA’s staff and faculty.

Susan Cowart, associate director for finance and human resources in the Division of Student Affairs, serves as a Change Champion for OneSource. She refers to the university’s separate and different systems as silos, or independent sources of information, that don’t communicate with each other.

“It’s overdue,” Cowart said. “Getting us to PeopleSoft is a fantastic move.”

The Change Champions have held weekly meetings since April to discuss concerns and ways to build excitement and readiness for the change and to answer questions from co-workers and others within their areas.

The meetings typically incorporate one of many nicknames the group brainstormed during the kick-off meeting “to see all the different aspects of our role,” Gibson said. “We call ourselves something different each week.”

As “Guardians of Getting the Word Out,” the Champions’ main goal is to spread awareness.

“The more that people and employees are informed, the more they’re going to feel comfortable with the change,” said Brooke Rooks, administrative financial director and Change Champion for the Grady College of Journalism and Mass Communication.

Sarah Fraker, the change management lead, said, “In terms of awareness, we are leaps and bounds ahead of anything I have seen, looking at it from the outside.”

She credits the successful level of awareness on campus to the Change Champions’ hard work attending meetings, hanging signs, making promotional material, speaking with leadership and other methods of spreading news about OneSource.

The Change Champions chose “Bridge Builders” as another nickname because they take their knowledge of the OneSource project and their individual involvement within their divisions to connect the two. Many place a sign on their office door that states: “I’m your one source for OneSource.”

After the “go live” dates for OneSource—July 2018 for the financial system and January 2019 for human resources and payroll—many of the Change Champions will shift in their roles.

“When the old system is unplugged and the new one is turned on, our jobs don’t end,” Gibson said.

Taking another nickname—“Transition Agents”—to the core, they’ll stay involved with the new system as trainers and go-to people for advice.

More than 400 volunteers have been answering the day-to-day questions and providing input to the OneSource Project by lending their expertise.

Being involved in the project has allowed Susan McCullough, a business manager in the Facilities Management Division, to build on her analytical skills and business process know-how. She estimates she spends 10 to 20 hours per week on OneSource projects.

Overall, as self-proclaimed “Catalysts for Success,” the Change Champions are working to ensure a smooth and transparent switch for their fellow employees.

“I think campus was very ready for the change,” Fraker said.