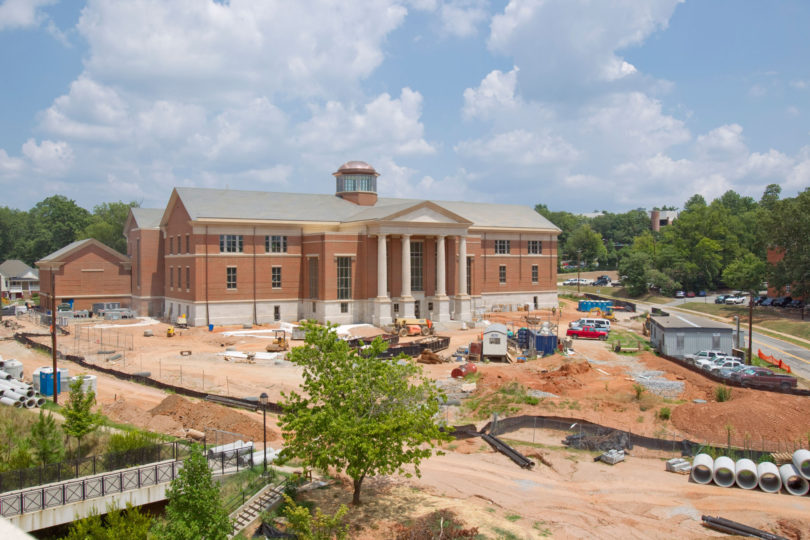 Construction is wrapping on the Special Collections Libraries building

With noticeable building renovations—including the Georgia Museum of Art and Stegeman Coliseum— completed over the last year, the face of campus has been reshaped since last fall. Here’s a look at how the campus facilities have changed:

Ongoing projects
Construction on the 115,000-square-foot Special Collections Libraries building should be complete in late August or September. Over the summer libraries staff boxed up collections to begin the moving process. The Hargrett Rare Book and Manuscript Library, the Richard B. Russell Library for Political Research and Studies and the Walter J. Brown Media Archives and Peabody Awards Collection will close for up to six weeks each during the fall semester for the move to the new building. The move will result in delays for those requesting access to materials. Once those collections have been moved, the libraries will partially open the Special Collections Libraries Building to provide prearranged access to materials. Located on the corner of Hull and Waddell streets, the building will officially open with a dedication Feb. 17.

At the Health Sciences Campus, formerly the site of the U.S. Navy Supply Corps School, renovations are under way on three buildings. Miller Hall will be the future home of the College of Public Health and work should be completed for a December move-in by the epidemiology and biostatistics departments and the Institute for Evidence-Based Health Professions Education. Office space inside Winnie Davis Hall is being reconfigured to accommodate the administrative offices of the Georgia Health Sciences University/University of Georgia Medical Partnership. Renovations, scheduled to begin in September, will be completed for a July move-in.
Russell Hall is being converted into a classroom facility for the Health Sciences Campus with faculty offices and teaching spaces on the first floor and multipurpose classrooms to be used by both the College of Public Health and medical partnership on the second floor. The building will be ready for occupancy July.

University Housing is preparing several of the townhouses on Kenny Road and Gilmore Circle to be marketed to visiting scholars beginning in this fall.

A childcare center for UGA faculty, staff and students should open in January on the Health Sciences Campus. Demolition at the former Navy Exchange Building began in May with renovations currently under way. Recruitment and registration for the center should begin in this fall.

Construction on the Visual Arts Building on Jackson Street began in August. The project will reconfigure the building for the College of Environment and Design. The first floor will consist of large landscape architect studios, an exhibit gallery, a computer classroom, a design library, staff offices and two lecture halls. The first floor also will house the college’s senior administration suite. The one-sided, day-lighted lower level will consist of large landscape architect studios, a critique corridor, an IT office and mechanical rooms. The goal is to have this building ready by fall 2012.

The Tanner Building on Fulton Street also was renovated this summer to provide a studio for students of the environment and design college.

Completed over the summer
District Energy Plant Number One, located at the corner of Baxter and Newton streets should become fully operational Sept. 1. It became partially operational in May. The plant will supply heating and cooling to the Special Collections Libraries Building, now under construction, as well as to other buildings planned for the future.

The School of Law’s Hirsch Hall was renovated this summer. On the first floor, the exterior passageway was enclosed and the adjacent courtyard was redesigned and refurbished. This project helped add square footage for community and student spaces. Interior views from the building have been opened up to the courtyard, allowing for natural light throughout the area, including the replacement of one of the interior courtyard walls entirely with glass. Additionally, a three-level grand stairway was constructed just inside of this three-story glass curtain wall.

The State Botanical Garden has made layout changes to the Alice Hand Callaway Visitor Center and Conservatory. The gift shop has moved to the entrance lobby. A reading room area also has been added to the gift shop. The welcome desk now faces the entrance. The art exhibit space is now in the alcove of the Conservatory great room, which now has even more plants. The new coffee shop will be opening soon. The old café space on the lower level has been converted to the Gardenside Room, a rental space overlooking the International Garden.

The Office of International Education has moved from downtown to 1324 S. Lumpkin St. across from the Spec Towns Track and Butts-Mehre Building. This renovated building was formerly the home of the Delta Phi Epsilon sorority.

After two years in the Visual Arts Building, The Georgia Review has moved across the street to Room 706A on the seventh floor of the main library.

In housing, Payne Hall received a heating and air conditioning upgrade. Mary Lyndon Hall was renovated with an elevator to be more accessible for those with disabilities.

The fourth floor of Pharmacy South is now ready for occupancy. Renovations are being planned for the RC Wilson Pharmacy Building to create new lab space on the second floor.

Completed over the past year
The Georgia Museum of Art expansion and renovation was completed in January with a Jan. 28 dedication. The museum now has an additional 16,000 square feet of new galleries, an outdoor sculpture garden, an expanded lobby and additional storage space. The new gallery space will accommodate continuous viewing of the museum’s permanent collection in the areas of early Italian Renaissance painting, 19th- and 20th-century American art, folk art and decorative arts. Special exhibitions will be on view in the C.L. Morehead Jr. Wing.

The Stegeman Coliseum concourse renovation was completed in November and a dedication ceremony was held in January. The project added an expanded concourse and lobby space to allow better mobility for spectators, a new ticket sales area, a new merchandising area, a first aid room, graphics highlighting academic and athletic success and signage to help patrons find their way around the building. The renovation also modernized and added restrooms and upgraded the concession areas.

The ceramics building opened in November on East Campus. The 15,500-square-foot building features indoor and outdoor kilns, undergraduate and graduate studios, faculty studios, classrooms, lecture space, storage space, a glaze calculation room with spray booth, a computer lab and a clay mixing and storage room. The building features operable windows and central corridors large enough to accommodate a forklift and the volume of clay and glazing material required by the discipline.

Reed Plaza, a pedestrian area containing expanded restroom and concession services for Sanford Stadium, is complete and a dedication ceremony was held Sept. 3. The plaza connects Sanford Drive and East Campus Road and is located at the foot of Reed and Memorial halls. It provides an additional 30,000 square feet of athletic patron space and has 24 new points of sale for football fans, including an expanded menu. Reed Plaza also will be used on non-game days for student affairs activities and outdoor lectures.

At the Grady College of Journalism and Mass Communication, the fourth and fifth floors of the building each received a new glass façade. The fourth floor had interior renovations to make room for a permanent home for the New Media Institute and the James M. Cox Jr. Center for International Mass Communication Training and Research (formerly located on the third floor). The fourth floor also features new graduate student offices, a conference room, a graduate seminar room, classrooms and an open computer lab for Grady students. This project was completed shortly after school started in August last year.

Parking Services
In Parking Services, lots remain the same as last year, though many lots have been restriped. Most construction projects impacting lots finished up over the summer. One change is that now enforcement times for all lots and decks are now posted on all entrance flag signs.

Scooter parking, no longer available in sidewalk corrals, has been moved to surface parking in 18 lots across campus. Now there are 579 spaces (159 more than last year).

UGA’s Alternative Transportation Program has expanded to include the Clean Air Campaign, and participants may choose either (not both) the campaign’s cash incentives or free parking incentives from Parking Services. The Clean Air Campaign also offers a ride-matching program that anyone with a UGA email address may participate in.

Ramsey Student Center patrons with UGACards may continue to park for free in the East Campus Deck from
4 p.m. until 8 a.m.

For this fall new suit/dress hanging lockers with digital locks are being placed in strategic areas of the building. Over the past year, carpeting in large areas of the facility has been replaced, tile in shower areas has been replaced and new faucets and fixtures in the locker room bathrooms were installed.

A new indoor rock-climbing wall, designed in part by the student climbing staff was installed last September. Also last fall, the Wellness Resource Center moved to Room 245C on the second floor. (For new programs at the Ramsey Student Center, see Bulletin Board).